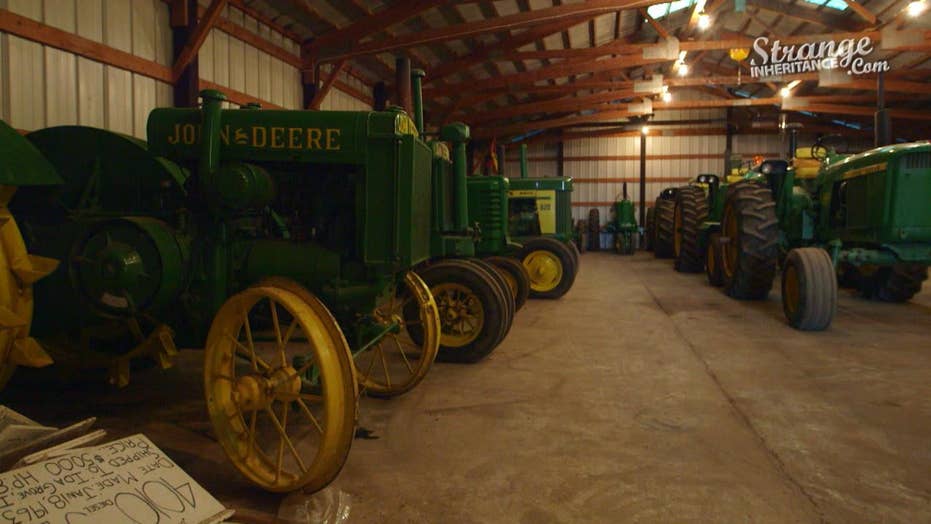 A family sits on a generations-spanning tractor collection.

The 1903 Ivel Agricultural Motor is hailed as being one of the greatest British inventions and only eight examples of the iconic farming machine are thought to exist worldwide. It was the brainchild of visionary inventor Dan Albone and was the first commercially viable British tractor and the first to go into volume production.

The 1903 model - number 131 - is said to be the best known of the surviving machines having been on display at the National Tractor and Farm Museum in Northumberland. The rare 24 hp vehicle came available for sale after its owner, John Moffitt, a vintage tractor collector, passed away in 2008. It went under the hammer at Cheffins' Vintage Sale at Sutton, near Ely, Cambs., on October 19 with a guide price of £200,000 ($260,000).

But it smashed its estimate to fetch a total of £328,600 after tractor collectors and enthusiasts from all over the U.K., Ireland and Europe flocked to the sale. The winning bidder wishes to remain anonymous, but auctioneers said the vehicle would “remain in the UK”.

The previous record price of £94,500 ($120,000) for a classic or vintage tractor was surpassed a further two times during the auction.

Bill King, chairman of Cheffins who conducted the sale, said: “This was one of the strongest collections of tractors we have ever cataloged and we saw exceptional trade.

“To break the previous auction record for a vintage or classic tractor three times on the day is remarkable. The undoubted highlight was obviously the Ivel. It was a huge privilege for all of us at Cheffins to offer this once in a lifetime opportunity to buy such an iconic and famous tractor and we are delighted to achieve such a deserving figure. The price exceeded our pre-sale estimate and there was a tremendous buzz and anticipation during the sale.”

The history of the Ivel is detailed in a book written by his previous owner John Moffitt, who is a cattle breeder, agricultural entrepreneur and vintage tractor collector. The research for the book found that the model sold at auction was used and exhibited at the Royal Agricultural Show in London in 1903. In 1970, Moffitt acquired the Ivel from Derek Hackett of Ross on Wye, Herefordshire, a firm friend through their shared interest in early machinery. It has appeared in the National Tractor & Farm Museum, the Beamish Museum and been exhibited at various events over the years.

To celebrate the Ivel’s centenary in 2003, Mr. Moffitt embarked on a 100-mile charity drive on the Ivel around the country which raised £120,142 ($155,000) for charity. Following Mr. Moffitt's death in 2008, the Ivel has been exhibited at various events and featured in various publications.

Four of the eight Ivels, which were built in Biggleswade, Beds., are currently in museums.