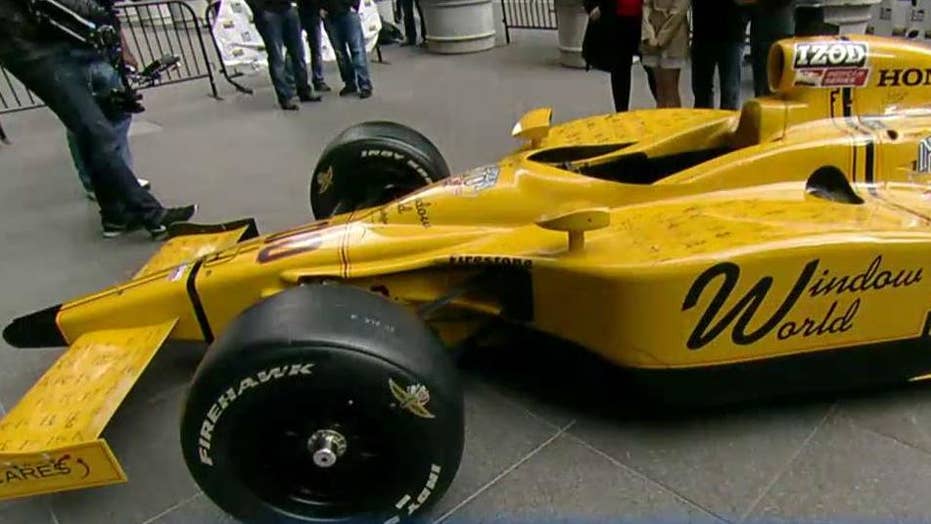 Historic racecar up for auction to help St. Jude

It’s a car a century in the making.

Inspired by the 100th anniversary of the first Indy 500 in 2011, racer John Andretti and his sponsor Window World set out to collect the signature of every living person who’d ever taken the green flag for “The Greatest Spectacle in Racing.” Not on paper, but on a racing car.

Since then, he’s been travelling the country with an authentic 2011 Dallara fitted with a decommissioned Honda engine that’s been painted in the same livery as the inaugural 1911 Indy 500-winning Marmon Wasp.

The effort isn’t just a tribute to the race, which marks its 100th running this year (several were cancelled due to wars,) but also a fundraiser for St. Jude Children’s Research Hospital.

Of the 273 drivers that were alive when the project began, 249 have graced the car with their names, including Mario Andretti, Gordon Johncock, and A. J. Foyt, who earned the place of honor in front of the cockpit by being the first four-time winner of the event.

Most of the missing signatures belong to foreign drivers who haven’t been able to make the trip to the United States, while 1960 winner Jim Rathmann died shortly after the project began, just before he was scheduled to sign the car.

Two-time champ Dan Wheldon, who won the 2011 Indy 500, died in a racing accident later that year, but signed the car before he did. His name, and all of the other winners, can be seen on the engine cover. Gary Bettenhausen, Jason Leffler and Justin Wilson have also passed since signing the car.

Tracking down so many drivers was challenging at times, but Andretti didn’t want to just ship pieces of the car around the world to collect the signatures. He thinks there’s a special aura about it, knowing that those men and women – including Jackie Stewart, Rick Mears, Sam Posey and Janet Guthrie -- were in its presence. In fact the only driver that a part was even removed for was Indycar team owner and three-time starter Sam Schmidt, who became a quadriplegic after a testing accident in 1999 and had to put a marker in his mouth to sign the rear wing.

While many of the drivers are still very famous and in the public eye, some were tough to find after being out of the sport for so many years. In a book that recounts the effort, “The Stinger, Speeding Toward Hope,” Andretti wrote “I called people morning, noon, and night, and did my fair share of begging and pleading. When I had an address, I knocked on doors; when no one answered, I left notes.” In one instance, he even had to bring the car to a penitentiary.

Donations to support the effort are being accepted through the Windows World Cares organization, with all proceeds going to St. Jude’s, but the very unique car itself, and other racing memorabilia, will be auctioned off on May 25th in Indianapolis.