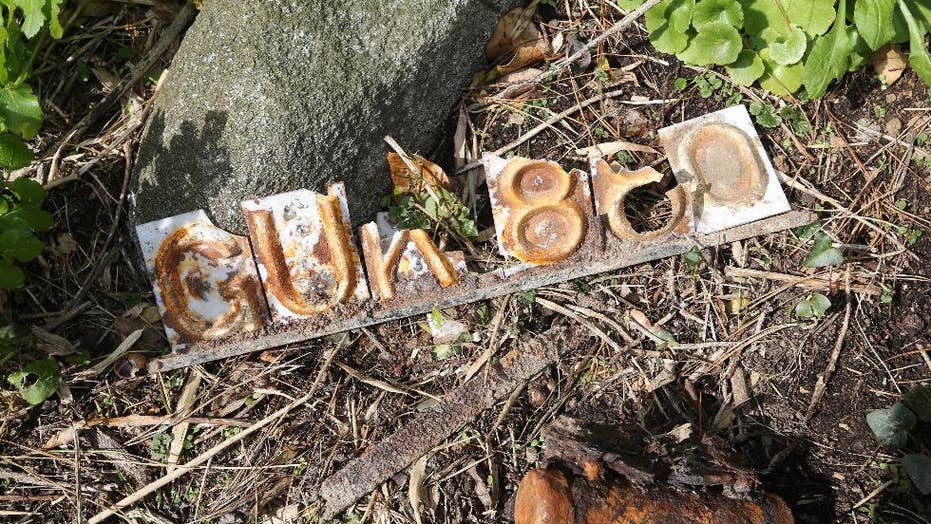 While digging in their garden a couple came across a vintage car. Buried below they unearthed a 1949 Daimler Consort. See the amazing photos.

A British family renovating their new property on the Channel Island of Guernsey were shocked when they found a classic car buried in the yard.

The remains of the car were buried under a rockery. (SWNS)

Tracy and Chris Ward were digging up a rock feature when they struck metal, and eventually exposed the rotted remains of a 69-year-old Daimler Consort.

The frame and engine can be clearly identified, while much of the rest of the car has rotted away. (SWNS)

The Wards told SWNS that they first thought it was a tractor, but then discovered broken window glass, red leather upholstery and a license plate.

Several identifying marks were found on the chassis. (SWNS)

The British luxury car was built from 1939 to 1953, and information gleaned from the artifacts indicates that this one was a 1949 model originally registered somewhere near Birmingham.

Brothers, Joe, 9 and Jake Ward, 6 with the buried Daimler which they discovered in their garden at a property in Rue du Felconte on Guernsey. See SWNS story SWCAR: These pictures show a rockery in a family's garden which turned out to be a buried 70-year-old CAR. Tracy and Chris Ward bought their home last November, but have only just set about tackling the garden. In the centre of their small plot there was an ornate rockery - or so they thought. When they started digging out the rockery they started to uncover bits of metal, and before long they had unearthed the remains of a 70-year-old Daimler Consort. (Guernsey Press © SWNS.com)

Tracy said that her two kids “have been loving it.”

One of them “wants to be a palaeontologist and he said this was like digging up a dinosaur."

They still have no idea how the car got there. The home was built in the 1950s or 1960s, but the area where the car was found was added to the property later. So far, they haven’t had any luck getting in touch with the original owner’s family to ask what they know about it.

The car is probably worth more as a conversation piece than it could be sold for. (SWNS)

Since news of the find got out, they’ve had plenty of offers to help excavate the car. Consorts aren’t particularly valuable, and there’s no telling if the parts from this one are worth anything, but intact ones can sell for anywhere from $5,000 to $50,000.