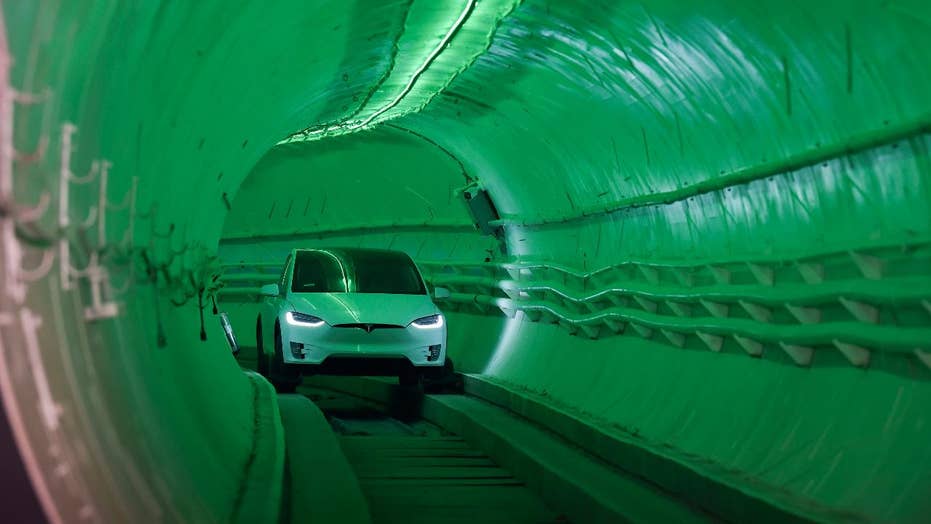 Elon Musk gives the public a first look at his company's prototype for a mile-long underground 'Loop' tunnel, giving rides to VIPs and reporters.

Elon Musk unveiled the workings of the prototype tunnel in Hawthorne, Calif., on Tuesday night, by giving rides to VIPs and a few reporters.

The mile-long tube runs 30 feet below the surface from Space X headquarters into a residential neighborhood and has car elevators on either end. A vehicle is lowered into the single-lane tunnel, where it pulls onto raised, rail-like platforms. Horizontal guide wheels mounted near the front tires hold the car between the walls, similar to some roller coaster designs, as, ideally, an autonomous driving system propels it up to 150 mph.

Musk envisions a network of surface traffic-beating tunnels filled not just with private cars, but also shuttles for pedestrians and cyclists to use, with a central computer managing them all like packets of data. The demonstration cars were manually driven, equipped with bumper guides instead of wheels and only operated at around 40 mph. Passengers, including Fox Business Network's Hillary Vaughn, reported a bumpy ride that made at least one of them sick. Musk promised that the finished product would be “smooth as glass” and that it could be compatible with any brand of electric autonomous vehicle, as long as it is equipped with retractable guide wheels, which he estimates would cost less than $300 per car. Vehicles with a low battery will not be allowed to enter as they will be operating under their own power inside, so one stalled it would tie everything up.

Musk said it will offer capacity than a traditional subway and be “way more convenient.”

“It’s time to upgrade to something better,” he Tweeted from the event.

Musk claimed the price for building the tunnel with a modified off-the-shelf boring machine was just $10 million, compared to up to $1 billion for similar projects. He said costs were cut by increasing construction speed, eliminating “middlemen," and reselling the excavated dirt as bricks. He didn’t provide exact details to explain the dramatic savings, but said he expects to reduce it even more in the future.

There are no immediate plans to open the first tunnel to public use, but The Boring Company is in talks with several municipalities about future projects, including one servicing Dodger Stadium and another connecting Chicago O’Hare International Airport with a downtown station, while a project proposed for West Los Angeles was recently canceled after The Boring Company settled a lawsuit filed by a community coalition that raised environmental concerns.