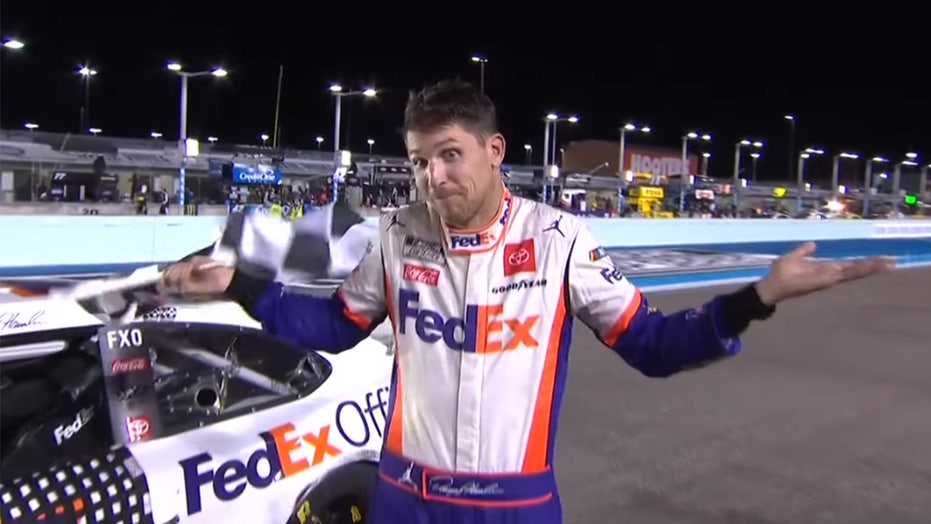 Denny Hamlin picked up his third NASCAR Cup Series at Homestead-Miami Speedway on Sunday night, which ties him with Tony Stewart and Greg Biffle for most victories at the track, but he just shrugged off the feat.

Following a post-race interview on FS1, the Joe Gibbs Racing driver looked at the camera and shrugged his shoulders with a "what are you gonna do" expression on his face as he returned to his car.

Turns out the gesture was directed at Michael Jordan, who famously made the same one after hitting six first-half three-point shots against the Portland Trailblazers in game 1 of the 1992 NBA Finals.

Hamlin is sponsored by Jordan Brand and knew the six-time champ was watching the race.

"I looked and he was one of the first guys to text me," Hamlin told CBS Sports.

"You know, why not? After a performance like that, after the s-----y one we had last week, you might as well live it up a little bit."

Hamlin came off a 24th place finish at Martinsville Speedway to sweep all three race stages at Homestead-Miami, lead 138 of 267 laps, including the final 30, and hold off Chase Elliott and Ryan Blaney to pick up his 40th career Cup Series win.

After a grueling and emotional run of three races in an eight-day stretch, during which NASCAR announced a ban on the Confederate flag from its events, the series gets a week-long breather before the next race at Talladega Speedway on Sunday, June 21.