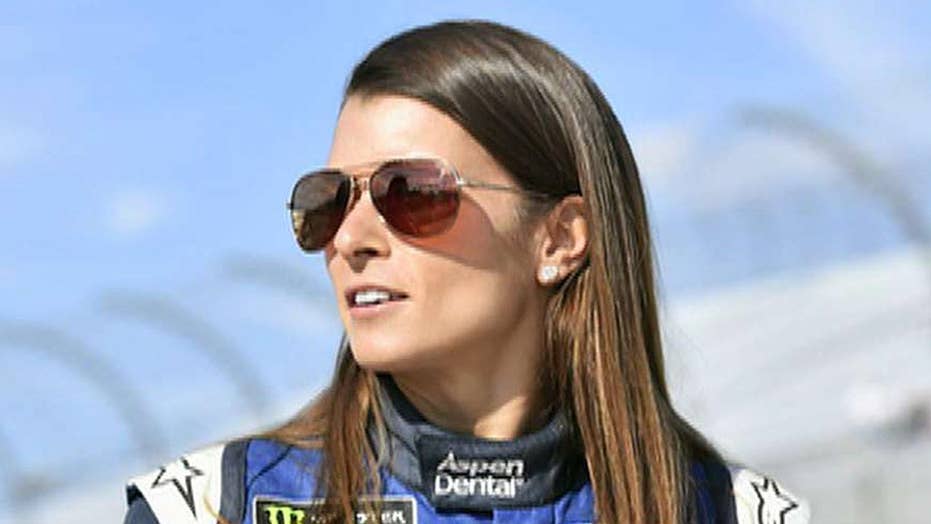 On 'Fox & Friends,' the race car driver whips up a recipe from her new health book 'Pretty Intense.'

Danica Patrick's days as a race car driver are pretty much over. She says she has two races left in her, the "Danica Double," but she has yet to announce rides for either the Daytona 500 or the Indianapolis 500.

With nothing racing related to announce, Patrick has stormed into her second act and shifted gears away from the track.

She returned to work last week promoting her new book, "Pretty Intense," a 90-day food, body and mind plan that she swears will change your life. She exercised on live television, prepared a meal, did a media blitz in New York City, then capped her week by returning to North Carolina for her first book signing.

And so begins regular life for Patrick — if "regular" is a thing for one of the most recognizable female athletes in the world.

Danica Patrick talks to a fan as she autographs her new book during a book signing in Charlotte, N.C., Thursday, Jan. 4, 2018. The transition from race car driver to businesswoman was swift, and Patrick is now adjusting to a new celebrity life that doesnât include driving cars. (AP Photo/Chuck Burton) (Danica Patrick is on a tour to promote her new fitness book, "Pretty Intense.")

It made sense for Patrick to choose a bookstore in Charlotte, the heart of NASCAR country, for her first signing. Autograph signings are a weekly requirement for race car drivers, so this was going to be a piece of cake.

The line began to form about an hour before she arrived. At the front were two race fans and a little girl wearing a Patrick shirt who had driven 45 minutes to see their favorite driver. There was a fan with the ticket from a recent NASCAR race hanging on a lanyard around his neck. A pair of high school boys, one wearing a neon GoDaddy jacket, nervously awaited their chance to meet the race car driver.

Of the roughly 200 people who showed up, at least 90 percent were fans of Patrick through racing. Roughly a dozen women who had participated in Patrick's pilot program that launched her book stood in line together, some wearing "Warrior By Danica" athletic gear, all living proof that "Pretty Intense" had worked.

"I was the fattest I've ever been," said Julie Grunwald of Charlotte, whose before and after photos and story made Patrick's book.

"I see muscles I've never had before. It wasn't as hard as I thought," said Grunwald, who has shed nearly 20 pounds and uses Patrick's guide as her new normal. "The workouts were intense, but doable. It took a while to get used to no dairy or sugar, but it's been a total life change. I'll never go back. I'll never eat the same way I ate ever again."

Grunwald represents the new fan base Patrick is currently courting. Yes, the bulk of the audience at this Barnes & Noble was comprised of race fans, but for Patrick to succeed in her second act her base needs to grow.

Underestimating her next career move would be a mistake.

Patrick is no fool. She left her Illinois home at 16 for Europe to try to become a famous race car driver. Despite mediocre results on the track, the "Danica Machine" was marketing genius and Patrick became a brand. Now the brand is shifting off the track and she's deftly navigating the landscape.

The middle-aged men in line to buy her book? Well, she joked with them that "Pretty Intense" is "practically a picture book," and revealed she's wearing her undergarments in many of the action photos.

The two teen boys stammering to talk to her? They have a fledgling blog, called "Out of Your League," and Patrick gave them positive mantras hoping they'd learn nothing is out of reach. As they walked away from the star, she called after them: "You guys should have asked me out. I'd have said yes."

Patrick is not going to talk about the end of her five-year relationship with fellow NASCAR driver Ricky Stenhouse. The two broke up shortly after the 2017 season ended. She is not going to entertain questions about a rumor she was spotted on a date with Green Bay Packers quarterback Aaron Rodgers.

Why would she? Keep everyone guessing and she remains in the headlines.

As for her "Danica Double," it appears she jumped the gun when she announced her Daytona and Indy farewell tour. She had not actually secured rides for the two showcase events before revealing her plan.

Patrick said the double "is coming a lot slower than I would like it to," but vowed that it will happen. It's never been this hard for Patrick to go racing, and a large part of these struggles is because of the economic climate. She has fallen into the category of a driver who needs to bring sponsorship for a race team to hire her.

She understands the circumstances, but didn't think it would be this difficult.

"I thought this time around, because I had less stuff, less sponsors, less teams, less everything, that it would go faster and be more straight-forward," she said. "But nothing in my world ever is."

Patrick said her plans to race in next month's Daytona 500 are further along than an Indianapolis 500 deal, but seemed certain both races will happen.

She's put her mind to it, and if you follow her guide, that's the first step in making positive things happen.