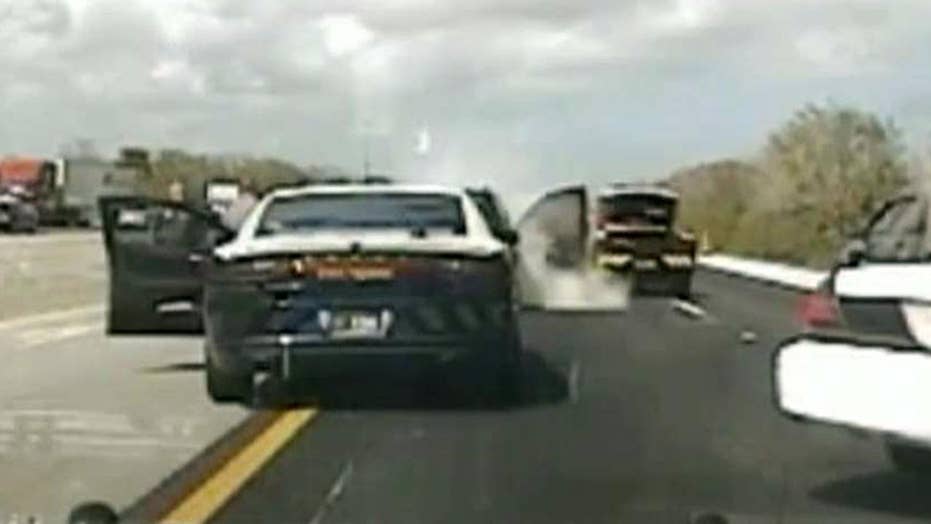 Driver called 911 claiming the accelerator on his BMW X5 was stuck; troopers managed to clear a path and used one of their cruisers to stop the SUV.

A car chase in Florida that reached speeds of 100 miles per hour ended with no arrests and the driver of the vehicle waiting at the sheriff’s office for a ride home, WPTV reported.

Joseph Cooper, 28, frantically called 911 after the accelerator on his BMW X5 got stuck while getting on the I-95, the station reported on Tuesday.

“Get out of the way!” Cooper could be heard yelling on the 911 call, according to the station.

He told dispatchers his 2003 SUV wouldn’t slow down or stop, and requested traffic assistance on the crowded freeway.

"I think my gas pedal is stuck on my car and I’m on I-95,” Cooper told dispatchers.

Dispatchers tried to solve the problem over the phone as the vehicle flew down the interstate, asking Cooper if he had tried to put the car in neutral or if he had any idea why it was stuck -- in which he replied “no” to both.

When dispatchers suggested Cooper try the emergency brakes, he responded: “Ma’am, I’m not going to do that at 100 MPH, I’m sorry.”

The runaway vehicle traveled nearly 50 miles before law enforcement was able to get ahead of the SUV and throw down three stop sticks to deflate the tires, according to the paper.

Florida Highway Patrol then used a pit maneuver to bring the vehicle to a stop after it was driving on just its rims.

Cooper was taken to nearby hospital to be treated for chest pain before being brought to the Indian River County Sheriff’s Office to wait for a ride, the paper reported.

The vehicle was not under any type of recall, according to the paper.