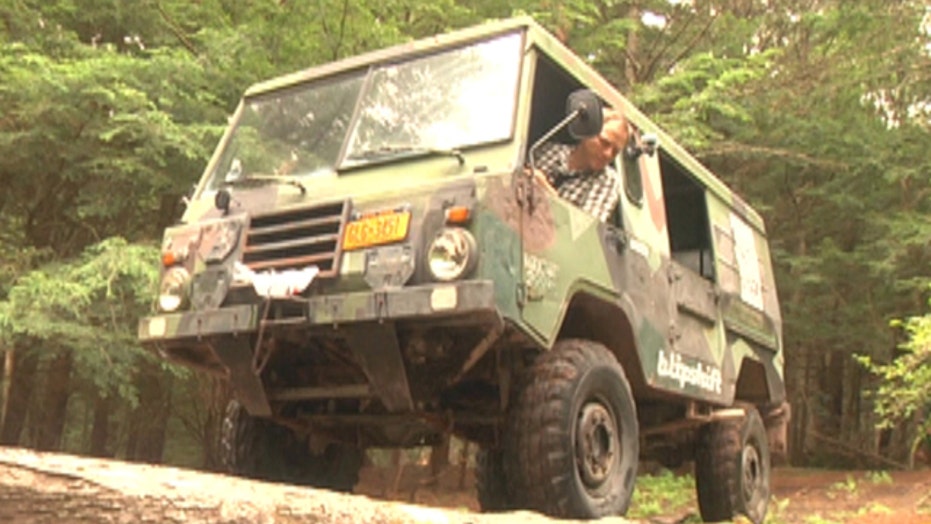 Off road in the most awesome Volvo ever

Fox Car Report's Gary Gastelu takes the Blipshift 1975 Volvo C303 for a spin through the deepest, darkest regions of New York at the Monticello Motor Club.

And you thought your Volvo 240 wagon was boxy.

The C303 is a military troop transporter and rescue service vehicle built by Volvo from 1974-1984, when its commercial and passenger car divisions were under the same ownership. It features a cab-over design, 3.0-liter inline-6-cylinder engine, 4-speed transmission, 2-speed transfer case, front and rear locking differentials and portal axles, the tippy-toes of the off-road world.

About the length of a Jeep Wrangler Unlimited, it has 15 inches of ground clearance, 45 degree approach and departure angles, a 28-inch fording depth, and an 80% grade climb rating, so the gravel road to your ski house is cake.

The engine only puts out 125 hp and 162 lb-ft of torque, but well-planned gearing makes the most out of it and it has no problem moving the 5,300-pound vehicle off-road. It’s challenged aerodynamic profile, however, limits its top speed to 75 mph and something closer to 50 mph is recommended.

Nevertheless, considering the Spartan interior design, and the fact that the engine is sitting between the front seats under a thin cover, the cabin is surprisingly quiet.

Read: Volvo's engine of the future

Falling somewhere between a Jeep and a Humvee in utility, a 6x6 version that could carry up to 19 passengers was also produced, and just over 8,000 in total were built, mostly for the Swedish armed forces.

Surplus C303s have developed a cult following among wheelers in recent years, and even Jeep designed a modified version of the Wrangler called the Mighty FC that, intentionally or not, apes its uniquely appealing design.

Automotive apparel company Blipshift recently picked up a largely original ex-Swedish Army 1975 model, and we took it for a spin in the deepest darkest regions of New York State…at the Monticello Motor Club’s new off-road course.

OK, not exactly Lappland, but we did get muddy and drive over a bridge made out of logs.

Check out the video to see how the old warhorse did: