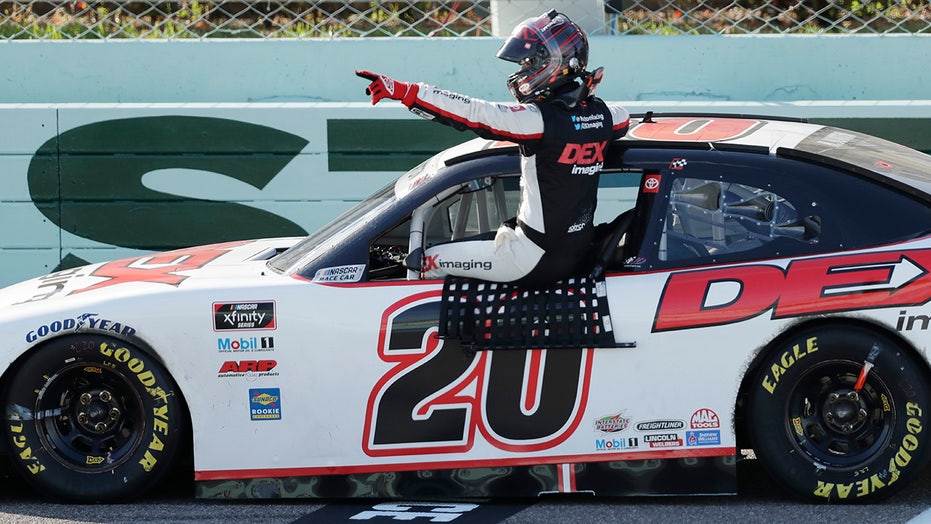 NASCAR driver Jesse Iwuji, who is also a lieutenant commander select in the Navy Reserve, reacts to veterans being in the stands at Homestead-Miami Speedway on 'Fox &amp; Friends.'

Burton took the inside line on the way to the lead in the final lap, and held on to win the Xfinity Series race Saturday at Homestead-Miami Speedway — denying, among others, Dale Earnhardt Jr. and Noah Gragson, who seemed to be in full command with seven laps remaining.

Burton, Gragson and Austin Cindric were three-wide going into that last lap, and it was Burton — the 19-year-old son of former Cup star Jeff Burton, who wound up in front in a wild finish.

Cindric was second and Gragson third, two spots ahead of Earnhardt — part of his JR Motorsports ownership.

“I don’t know what I was doing, either, honestly,” Burton said of the three-wide fight going into that final lap. “What a race.”

Burton became the youngest driver to win a series race at Homestead. Cindric, the son of Team Penske president Tim Cindric, got his fifth top-five finish of the season but is still looking for his first win of 2020.

“Lot of personal strides, but at the same point, tired of losing," said Cindric, who led 24 laps and won the second stage. “But losing in this sport means that you're close to winning."

It was shaping up to be a runaway, with Gragson leading by more than 10 seconds before a caution came out with about seven laps remaining. But he couldn’t recapture that magic on the restart, and what would have been his third win of the season quickly slipped away.

“Restarts were just the biggest struggle. ... Just couldn’t get it going,” Gragson said.

It was Earnhardt’s third Xfinity Series appearance since retiring as a full-time Cup Series driver in 2017. He’s been top-five in all three of those cameos, and was sitting second behind only Gragson when that late flag came out.

“I was rusty, all the way through,” Earnhardt said.

Earnhardt was winless in 17 Cup Series starts at Homestead in his career, with only one finish better than 10th in those. He’d also raced there five times in the Xfinity Series, placing second in 1999 for his best finish.

Either way, Saturday was a memorable day for Earnhardt.

He’s one of 15 nominees for the 2021 class that will go into the NASCAR Hall of Fame. The votes have been cast, with results scheduled to be revealed Tuesday afternoon. Earnhardt said he will document how he gets the call — if he's in or not — on his popular podcast.

Talking on his radio while taking pace laps Saturday before the race started, Earnhardt somewhat comically revealed that he was anxious about being behind the wheel again.

“There ought to be something in the rule book to keep this from happening,” Earnhardt said. “I haven’t been in a race car since Darlington last year. I’ve got no laps. I have no idea what’s going to happen. I’ve been nervous as hell for a week.”

It didn’t show. He was right there, all the way to the end.

But the day belonged to Burton, who grabbed his second victory of the season. The Xfinity cars are back on the track Sunday before the Cup Series race at Homestead. Earnhardt is not driving Sunday, insisted that Saturday’s race will be his lone appearance as a driver this season, and said this appearance might have been his final one for good before he shifts to broadcasting full-time.

He's winding down. Burton is just getting started.