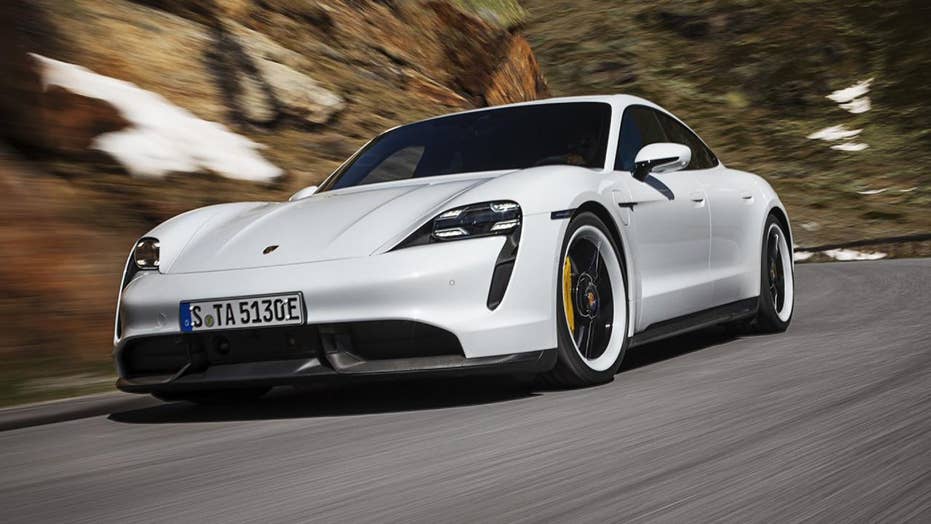 The Porsche Taycan is almost ready to take on Tesla.

The production version of the German automaker’s first all-electric car was revealed on Wednesday morning at Niagara Falls near a hydroelectric power plant. Simultaneous events were held at a wind farm in China and a solar farm in Germany in order to drive home its green energy cred.

The curvy four-door is roughly the same size as a Tesla Model S, at which it is very squarely-aimed. The styling makes it instantly recognizable as a Porsche, but with a modern edge that doesn’t stray too far into the realm of science fiction. Deliveries are scheduled to begin late this year with the top of the line Turbo and Turbo S versions that were unveiled in New York.

Electric cars don’t have turbochargers, but Porsche North America President Klaus Zellmer told Fox News Autos that the company decided to keep the nomenclature because it’s moved beyond its traditional definition at the brand (and others, like Gillette.)

“Our customers identify it with the highest model in each of our lineups,” Zellmer said.

Both feature all-wheel-drive with dual electric motors powered by a 93.4-kilowatt-hour battery pack. The front motor drives the wheels directly, as is common in electric cars, bit the rear features a 2-speed transmission. Zellmer said Porsche took the unusual step because it was the best way to fully utilize the Taycan’s power.

There’s plenty of it. The Turbo is rated at 616 hp and can crank out up to 670 hp and 626 lb-ft of torque in bursts when launch control is engaged. The Turbo S has the same base horsepower, but has a max power output of 750 hp and 774 lb-ft, which technically makes it the most powerful sedan in the world. Less potent versions will be added later, but Porsche is looking to come hard out of the gate with the Turbos, and they can definitely do that.

The Turbo and Turbo S can accelerate to 60 mph in 3.0 s and 2.6 s, respectively, and cover a quarter-mile in 11.1 s and 10.6 s. The Tesla Model S is officially capable of hitting 60 mph in 2.4 s, but Porsche is notorious for sandbagging its performance specifications. Importantly, it says it can provide this kind of performance over and over again without any loss of power, which is a common issue with electric performance cars.

Top speed for both is restricted to 161 mph, but exactly how far you can drive them at that or any speed is yet to be determined. At least in the U.S. In Europe, they’re rated with ranges of 450 km per charge for the Turbo and 412 km for the Turbo S. That converts to 280 mi and 256 mi, but the European testing procedure is different from the EPA’s. For comparison, The Tesla Model S Long Range, which features a 100-kilowatt-hour battery, is rated at 610 km in Europe and 370 miles in the U.S.

Whatever the range ends up being, drivers will be able to replenish it quickly thanks to the Taycan’s 800-volt battery pack, an industry first. Plugged-in to a high-speed charger it can fill it from 5 percent to 80 percent in 22.5 minutes.

Porsche is installing high-speed chargers at each of its dealerships and several public charging networks are also adding them to their stations. Among them is Electrify America, which is owned by Porsche parent Volkswagen Group and will provide Taycan owners with three years of complimentary charging, similar to how Tesla has granted free access to its Superchargers as an incentive to some customers.

One thing Porsche isn’t looking to compete with Tesla on is the promise of autonomy. Zellmer said the Taycans can only be had with Level 2 driver assist features like those currently offered on its other models, because Porsche doesn’t think more advanced systems are ready for primetime and is “convinced our customers like the feel of a steering wheel and full control.”

That wheel sits in front of one of the five digital displays in the Taycan’s cabin, with another placed above the glove compartment for the front passenger to use. Full details on the features they will provide have not been released, but the Taycan will be the first car that can run Apple Music without a connected smartphone and will accommodate over-the-air updates. Leather-free interiors will be available.

The Turbo comes with an adaptive air suspension and can be equipped with optional roll control and rear-wheel-steering that is standard on the Turbo S. Four drive modes deliver a range of comfort and performance settings, while drivers can program their own combination of suspension stiffness and power delivery. A Turbo S recently set a track record for electric sedans at the benchmark 13-mile-long Nurburgring Nordschleife race track in Germany with a time of 7:42, just 17 seconds off the four-door record.

Prices start at $154,660 for the Turbo and $188,960 for the Turbo S, which is roughly the same as the equivalent Porsche Panameras. Zellmer said both have a place in Porsche’s lineup.

“The Taycan is for customers looking to be first movers on the battery electric trend, while the Panamera suits those who prefer the feel and sound of an internal combustion engine and aren’t quite ready to take the step into electrification.”

BE HEARD! WOULD YOU BUY AN ELECTRIC PORSCHE? FOLLOW FOX NEWS AUTOS ON FACEBOOK AND LET US KNOW

Additional Taycan models will be added soon, but pricing hasn’t been announced. However, the entry-level Panamera is under $90,000 and rumor has it the Taycan will eventually follow suit.

Porsche claims it has over 20,000 refundable deposits for the Taycan, which represents roughly the first full year of production, but now that the order books are open it will find out how many of those actually translate into sales.

This story has been updated with additional details