The catastrophic result of a 73 year old's Porsche colliding with a call and crashing into a pedestrian subway. See Masons story MNPORSCHE; The incident happened just after 6pm on Thursday evening (5 Apr). it is believed that the car was parked in a car park before it crashed through the wall. Several police cars and two fire engines were sent to the scene. (SWNS)

A 73-year-old man is fine after driving his $100,000 Porsche through one wall and almost over another, where it got stuck standing on its nose.

It would've been an impressive stunt if it were on purpose.

The car landed on top of a 10-foot-tall barrier wall and tipped onto its nose. (SWNS)

Witness in Colchester, U.K., said they saw the 2014 911 Targa 4 come smashing through the brick wall of a raised parking lot, clear a 10-foot gap and then land on the barrier protecting the walkway below it, where it ended up in a nearly vertical position.

A view of the wall before the accident shows the walkway passing below it. (Google Street View)

Essex Poice Sergeant Colin Shead told The Sunday Times that neither the driver nor any pedestrians were injured in the April 5 wreck, and the man had been offered a ‘fitness to drive’ course.

Emergency services needed to use a crane to remove the vehicle. (SWNS)

The car didn't fare as well, suffering broken windows and serious damage to its bodywork, although its structure held up surprisingly well considering the double hit it took. A crane needed to be called in to remove it from the scene.

The cause of the accident is of yet unknown, but SWNS reports that it is believed that the vehicle was parked in the lot prior to the incident.

THE PORSCHE 911 TARGA HAS A REALLY WILD ROOF: 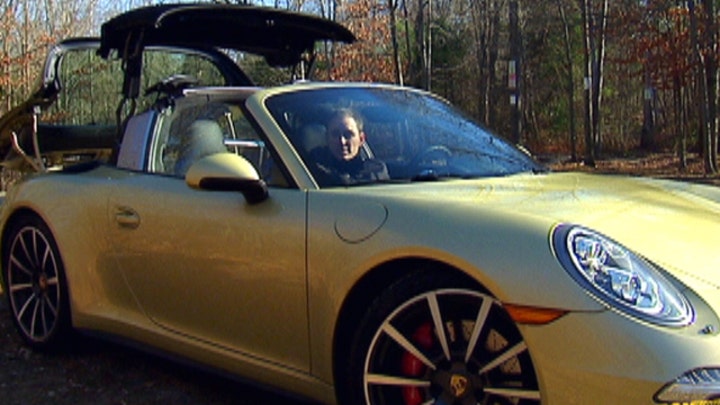