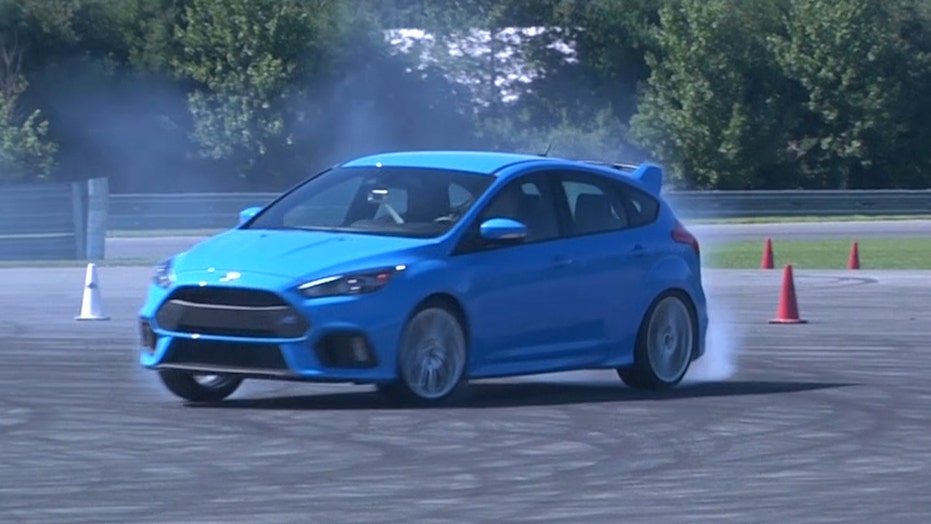 Gary Gastelu gets the drift in the high-performance 2017 Ford Focus RS.

All-wheel-drive systems are designed to enhance traction. Driving four tires doubles your chances of finding grip when you need it. But what if you don’t want it?

The 2017 Ford Focus RS is the hottest compact hatchback the company has ever made. The little five-door is powered by a 350 hp 2.3-liter turbocharged four-cylinder with 350 lb-ft of torque that the front tires alone could not contain. (The Focus ST has enough trouble with its relatively measly 270 lb-ft.) So Ford Performance developed a unique all-wheel-drive setup that can send up to 70 percent of that twist to the rear wheels, where it can be put to good use in a variety of ways.

There, it’s channeled through a piece of mechanical wizardry called a Torque Vectoring Rear Drive Module, which combines a differential and two clutches that can send all, some or none of its share of the torque to either wheel. A computer figures things out on the fly to keep tires from spinning (usually!) while using it to help the car turn, the way a rowboat goes right when you paddle harder on the left.

On a track or a twisty road, there’s no understeer, and just a hint of rear-bias. It’s neat and neutral, even when you hammer it coming out of a hairpin turn. Its perfection in doing this belies the car’s $36,775 price. That’s hardly cheap, but I’ve driven far more expensive cars that can’t manage their power as well. Neither can the Focus RS’s direct competitors: the rawer Subaru WRX STI and more sophisticated Volkswagen Golf R.

Like the Subaru, the Focus RS only comes with a six-speed manual transmission, which gives it serious street cred in an increasingly autonomous age. The stick does have a trick of its own, though: It lets you keep the throttle pedal on the floor during upshifts as it begs the engine not to explode.

That engine is related to the 310 hp version offered in the Mustang, but it gets its own cylinder heads, turbo and a few other tweaks to crank up the power. It’s fed and cooled via massive vents in the front end, and Ford says it and the brakes are good for at least 30 minutes of uninterrupted hot laps before they need a break.

Deep, racy Recaro seats and a fat flat-bottom steering wheel come in handy there, but they don’t do much to hide the fact that the Focus it’s based on is a cramped, 6-year-old car. There is one feature, though, that might distract you from it.

Along with Normal, Sport and Track, the RS has a driving mode called Drift, which has nothing to do with snow but will have you slipping and sliding around like you’re on a frozen lake. It softens the adjustable dampers, dials down the stability and traction control and sends a heavy helping of drive to the rear.

Just turn the wheel, floor it and hope you saved enough money for new tires, because they instantly go up in smoke. It really is that easy to get loose. To do the same thing in a typical AWD car, you have to steer the wrong way, lift off the throttle, steer the right way, maybe add a little emergency brake…it’s a whole production. Ken Block never had it so good.

But don’t expect it to make you look like him. You still need to know how to drift. It just helps you get sideways. Not spinning off into oblivion is up to you. Basically, it’s the opposite of training wheels, and the antithesis of what we’ve come to expect from AWD.

The thing is, there are few times or places where using Drift mode is appropriate or advisable. YouTube is already populated with videos of fails on public roads, and when I dipped into it during a lapping session on a road course, the first turn felt like I was driving a Ford Crown Victoria cop car with worn tires. It really is a one-trick pony.

But it’s a pretty cool trick.