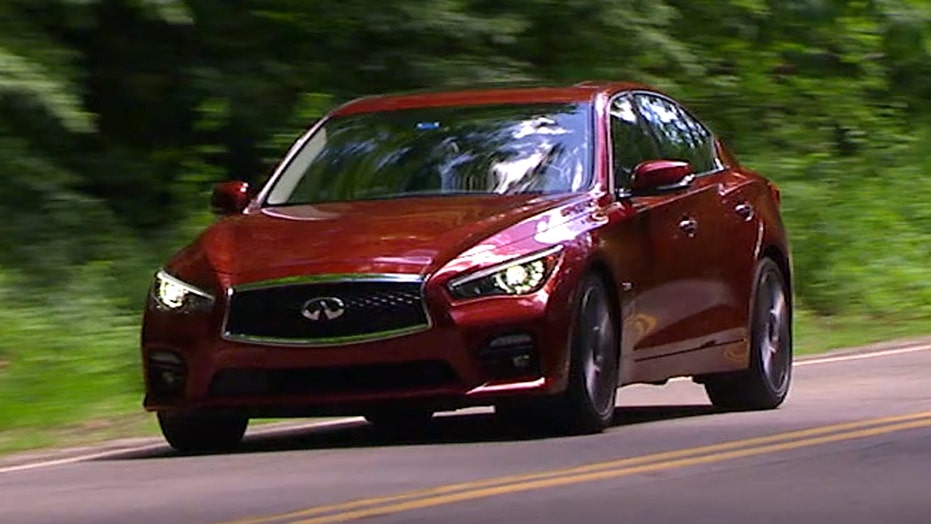 Luxury sedans blow. A least their engines do.

Whether you’re talking turbochargers or superchargers, forced induction is the name of the game these days. All the European brands use it. Cadillac has a couple, as do Lexus and Lincoln.

Acura is still a holdout, but its twin-turbo NSX supercar indicates that may soon change. The siren song of more efficient power is simply too hard to resist.

Infiniti, long known for its revvy, naturally aspirated V6 engines, is the latest to succumb to peer pressure. Aside from the hybrid model — which gets its boost from electricity instead of a breath of fresh air — the Q50 is now exclusively powered by a selection of turbocharged engines.

The list includes a 208 hp four-cylinder ($34,855,) a 300 hp twin-turbo V6 ($40,805,)and a whopper of a 400 hp twin-turbo V6 in the top-of-the-line Red Sport model, Infiniti’s first true high-performance sedan. Starting at $48,855, it has a firm, active suspension; wide, sticky summer tires; and sporty exhaust tips for all that extra air to come out of in style. The Q50 is technically in the compact segment, but it fits more like a midsize. Either way, among imports, that power is unbeatable at the price.

It has a smooth engine with lots of grunt down low that makes it easy to spin the rear wheels, often when you’re not even trying to. (There’s an all-wheel-drive version if that kind of nonsense isn’t your thing.) It’s quiet, another advantage those muffling turbochargers bring to the table. Or disadvantage, depending on your point of view. The digitally-enhanced sound pumped into the cabin to compensate for this is so-so.

In all its guises, the Q50 delivers a tasty cocktail of plushness and athleticism, and that is definitely true of the Red Sport. You wouldn't take it to the track, but it’s a satisfying street machine that’s readily at your command. That is, unless you’d rather be bossed around.

The list of pseudo-sentient electronic aids available for the Q50 is extensive. Fully equipped like my test car, which rang up at $57,475, the Q50 can autonomously brake for obstacles, both in front and behind. It actually stopped for a shrub I was about to back into while making a K-turn. That’s right, a shrub.

Tailgating? It will press up on your foot with the gas pedal to let you know that’s a bad idea, and it will do that to help you save gas if you have it set to Eco mode and there’s too much lead in your foot. (After a few prods, you start to wonder why Infiniti gave it so much power.)

Since the navigation system knows where you are, it tells the seven-speed transmission to downshift in anticipation of the windy mountain road coming up ahead. The adaptive cruise control works in stop-and-go traffic down to 0 mph, and the Q50 does a very good job of steering itself between the lines on the highway.

Helping it do that is a drive-by-wire steering system. The wheel in your hands isn’t mechanically connected to the wheels up front. It sends signals to an electric motor that turns them on its behalf. Yes, there’s a backup driveshaft in case the computer has a brain freeze, but it engages only if that happens. (A recent recall to fix a software glitch proves it’s possible, but there have been no accidents caused by it.)

It feels a little strange, but it works perfectly. Better than perfectly, I’m told. It makes tiny corrections to the steering that you’d otherwise be responsible for. The Q50 also has something called Active Trace Control that makes sure it’s going exactly where you’re pointing it as it reins in the power and modulates the stability control. It’s hard to get a read on how effective this is in normal driving, but if you’re going very slowly in a parking lot, turn the wheel sharply and press harder than you should on the accelerator to get a taste of how it sorts things out without much fuss.

Just about all these features can be turned on and off individually, but when the full suite is engaged, and you settle into it, it’s like driving an exoskeleton programmed to enhance your skills and safety. Infiniti says true hands-off driving will be coming to its cars soon.

If the Q50 charts the direction the technological winds are blowing, it’s pretty cool.