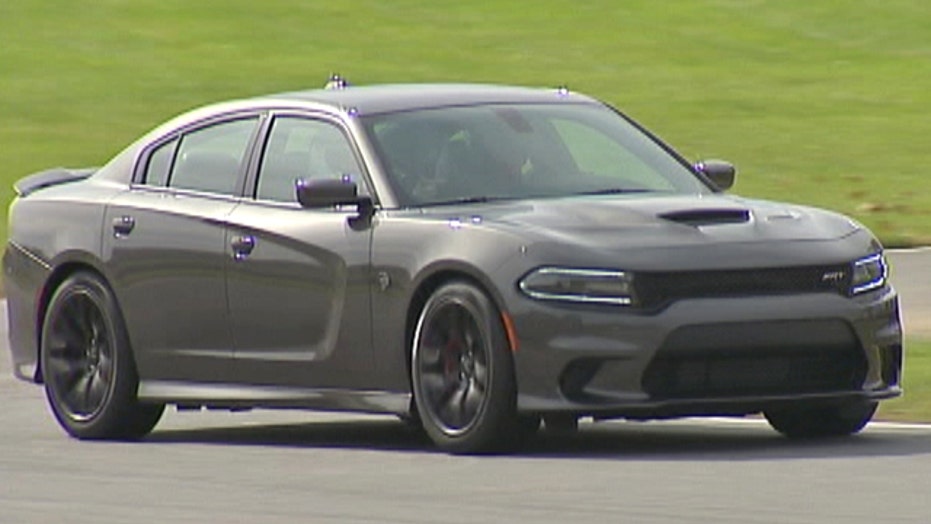 I recently reviewed the 2015 Challenger SRT Hellcat, which Dodge bills as the Most Powerful Muscle Car Ever. Considering that muscle cars are a uniquely American creation, you might be wondering why they didn’t just call it the Most Powerful American Car Ever.

That’s because there’s a tie.

The 2015 Dodge Charger sedan is also getting an SRT Hellcat version, powered by the same 707 hp 6.2-liter supercharged V8 found in the Challenger. Dodge says it’s the quickest, fastest and most powerful four-door in the world. So bring the family!

In terms of horsepower, that last one — most powerful — is correct, and its quarter-mile time of 11.0 seconds and top speed of 204 mph back up the other claims. Thanks to the Charger’s slipperier bodywork, those numbers are also better than the Challenger’s.

Three gaping holes in the hood are its most distinctive features, and they’re needed to provide air and cooling for the monster beneath it. The Hellcat V8 really is beyond the pale, not just because it’s so powerful, but because it was built to last, either on the street or the track.

I had the opportunity to drive it on both, making the run from Washington, D.C., to Summit Point Motorsports Park in West Virginia, where Dodge let a group of journalists have at it for several hours in the Hellcats and lesser eight-cylinder Chargers. All humans and machines survived the day intact.

On the road, the Charger’s ride is a step better than the Challenger’s, which is an excellent cruiser but can be brutish over the roughest stuff. The Charger’s longer wheelbase and a slightly softer electronically adjustable suspension take the edge off, while its 8-speed automatic transmission – the only one available – does its best to squeeze out 22 mpg highway.

The Hellcat is happy to purr around town, and you can even use the touchscreen infotainment system to dial it down to 500 hp, which is a new kind of entertainment. Regardless of the setting, the whine of the 2.4-liter supercharger is ever present and seems as loud in the cabin when you floor it as an old-timey police siren.

Dodge makes a law enforcement version of the Charger, but only with the 5.7-liter motor. After driving it back to back with the Hellcat, I feel bad for the boys and girls in blue. You haven’t experienced 707 hp until you have. Few things so large and heavy can move this quickly. The aviation-inspired Hellcat name is fitting, and the cops stand no chance.

But it’s a well-rounded car. Coming down from 145 mph at the end of the Summit Point Circuit’s front straight, the six-piston Brembo front brakes brush off speed easily, and the following 45-mph cruise through turn one feels like you’ve parked. It’s more stable than the Challenger, less prone to swing the tail out and has plenty of bite in the curves.

Comparisons? Well, there aren’t many. The Chevrolet SS and Ford Taurus SHO are welterweights against the Charger SRT Hellcat, while the midsize Cadillac CTS-V -- the former U.S. titleholder in those “most” categories -- is smaller and older and about to be replaced. The Dodge’s price undercuts the Caddy’s by $825. Head to Europe and you’ll spend much more for anything that comes close.

No one needs a car like this, but as an example of American exceptionalism, the want is strong. And I’m not just talking about the U.S. The engine is manufactured in Mexico and the car is assembled in Canada, so it’s a real kumbaya moment in NAFTA history. Take that, EU, ASEAN and whatever other acronymic economic trade partnerships want to dance.

I may even let you cut in.