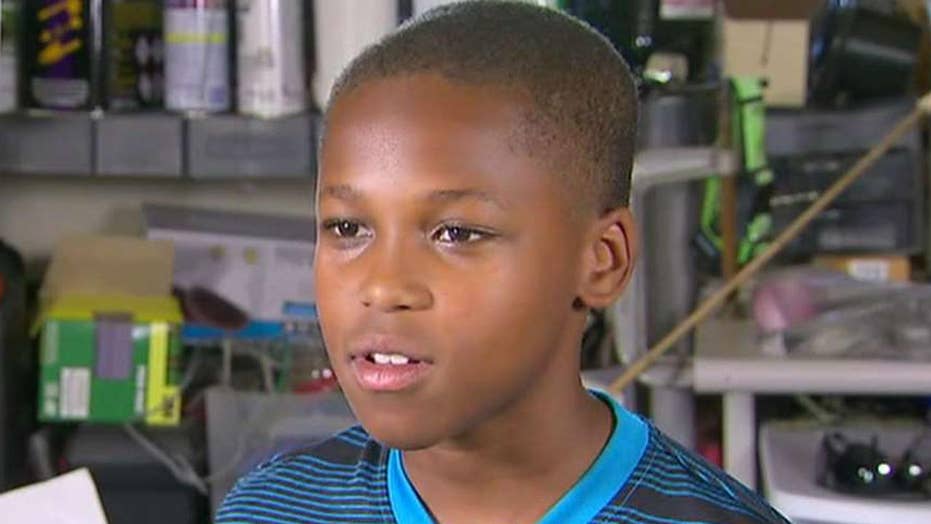 DALLAS – The news was on, and it was an all-too-familiar story for North Texas in the summertime.

A father had accidentally left his baby daughter in the back of a van, only to find her lifeless body hours later.

Bishop Curry V, 11, was watching the news that night with his family. The baby who died was from his small town, Melissa, Texas, and she was about the same age as Curry's baby sister.

His mother, Tia Curry, told Fox New what happened next.

What could an 11-year-old do? Turns out, plenty. But Bishop is no ordinary 11-year-old.

His father is an engineer, his mom is a teacher, and Bishop, from an early age, showed an interest in creating things. He carries a journal with him to jot down ideas. That night, about a year ago, he sketched out a car seat and started thinking. After the sketch, Curry worked with his dad to build a prototype, and another, and then two more.

He ended up creating a device to prevent hot car deaths. Once the device detects movement, from a baby or pet locked in, a fan kicks on to help lower the rising temperatures and it sends out a notification to police and the parents.

OKLAHOMA INFANT DIES AFTER GRANDMA FORGETS HER IN HOT CAR

"It basically senses the baby," Bishop said. "It cools down the baby and contacts authorities."

Bishop now has a patent pending and is talking with car companies and manufacturers.

With summer heat on the rise, potential issues posed by interior car temperatures are even more real, but Nissan hopes its new Rear Door Alert (RDA)1 may help reduce concerns. The new system utilizes door sequence logic, center instrument panel message display and industry-first multiple horn honks to help remind drivers to check the rear seat after the vehicle is parked. The system can help remind customers of anything that may be forgotten in the rear seat. First-ever Nissan application will be standard on the family-friendly three-row 2018 Pathfinder SUV. (© 2017 Nissan)

An average of 37 children die each year after being left alone in a hot car, according to one Northern California researcher. Texas leads the nation in hot car deaths and most of the victims here and nationwide are under 2 years old.

Children's Health Dallas is part of a group of organizations trying to bring attention to the issue. Lori Vinson, a registered nurse who is senior director of trauma at Children's Health said heat is particularly dangerous for children.

"They don't sweat like we do, so they don't release the heat in the same way we do," Vinson said. "Their respiratory system will be compromised. Then, they actually get into cardiac problems with irregular heartbeats and that can get them into a fatal situation."

It will take time before Curry's device, called "Oasis" goes on the market. In the meantime, experts say there is a low-tech option everyone with a young child should try.

By leaving a physical reminder in the back seat – a cell phone, a purse or even a shoe since you can't go far without it – a life could be saved.

Saving lives is also what would convince Bishop Curry that his device is a success.

"Our mission is to save at least one life," Curry told Fox News. "If I can get just one that has been saved, that basically tells me it works."