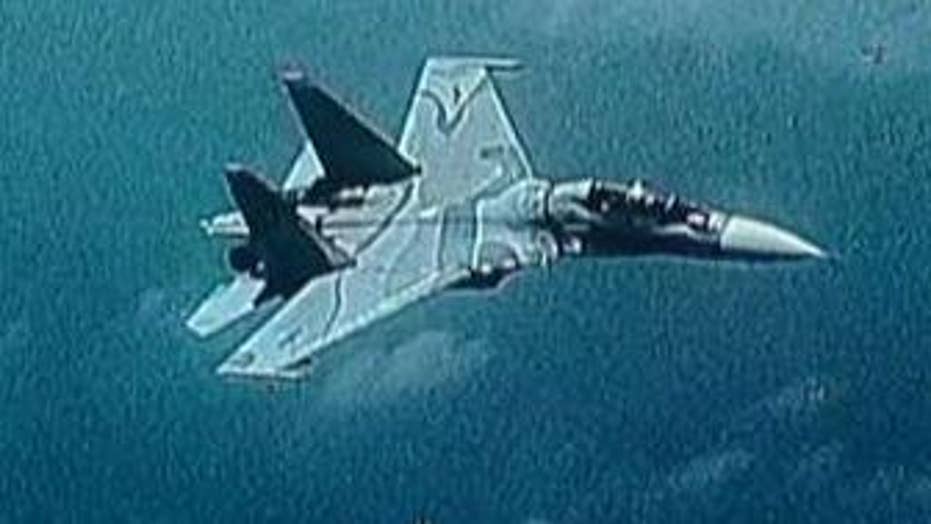 A U.S. Navy intelligence aircraft was "aggressively shadowed" by a Venezuelan fighter jet over the Caribbean Sea on Friday in a move that U.S. officials are calling "unprofessional" and endangered the safety of those on board.

The U.S. Southern Command (SOUTHCOM) said Sunday in a news release that a U.S. Navy EP-3 Aries II aircraft was flying a mission in international airspace when it was approached "in an unprofessional manner" by the Venezuelan SU-30 Flanker fighter plane, a Russian-made jet.

"After reviewing video documentation, we have determined the Russian-made fighter aggressively shadowed the EP-3 at an unsafe distance in international airspace for a prolonged period of time, endangering the safety of the crew and jeopardizing the EP-3 mission," SOUTHCOM said in a statement.

SOUTHCOM said that the U.S. "routinely conducts regionally-supported, multi-nationally recognized and approved detection and monitoring missions in the region to ensure the safety and security of our citizens and those of our partners."

The Venezuela SU-30 Flanker “aggressively shadowed” a U.S. Navy EP-3 aircraft on Friday over the Caribbean Sea, according to U.S. military officials. (SOUTHCOM)

The EP-3 aircraft was "adhering to international standards and rules" at the time of the incident, SOUTHCOM said.

SOUTHCOM also shared a video of how close the Venezuelan fighter jet got to the Navy plane on Twitter.

The Navy plane, an EP-3 aircraft is generally used by the Navy for anti-Submarine warfare and anti-surface warfare and has a range of 2,380 nautical miles, according to a Navy fact sheet.

The incident underscored rising tensions between the two nations.  The Trump administration and more than 50 other nations back opposition leader Juan Guaido's attempt to oust President Nicolas Maduro, whom they accuse of leading the country into a historic crisis. The socialist leader maintains support from countries including Cuba, China and Russia.

Venezuelan officials claimed the aircraft entered Venezuelan airspace without notification and was "a clear provocation” in addition to being in violation of international treaties. Venezuela's Defense Minister Vladimir Padrino Lopez said on Twitter the incident happened around midday on Friday, and created a safety risk for commercial aircraft from the country's main airport.

The Venezuelan  Operational Strategic Command also shared a map of where the incident took place. Upon identifying the plane as a U.S. electronic intelligence-gathering aircraft, the fighter jet escorted it from the region, Venezuelan authorities said, adding that there have been 76 such incidents this year.

"The Armed Forces of Venezuela firmly reject this type of provocation on the part of the United States of America," Padrino Lopez said in a statement. "We will continually be alert to watching over the tranquility of the Venezuelan people."

SOUTHCOM said that the "unprofessional" act demonstrated a continued action by the Maduro regime to "undermine internationally-recognized laws and demonstrate its contempt for international agreements authorizing the U.S. and other nations to safely conduct flights in international airspace."

"Despite the Venezuelan people’s suffering, his nation’s vital infrastructure crumbling, and children starving, Maduro chooses to use his country’s precious resources to engage in unprovoked and unjustified acts," SOUTHCOM said.

​The Venezuela SU-30 Flanker that “aggressively shadowed” a U.S. Navy EP-3 aircraft endangers and jeopardized the mission, according to U.S. military officials. (SOUTHCOM)

SOUTHCOM added the action by Venezuela "demonstrates Russia’s irresponsible military support to the illegitimate Maduro regime and adds to Maduro’s growing legacy of reckless and negligent behavior, which undermines international rule of law and efforts to counter illicit trafficking."

The incident over the Caribbean Sea came just over a month after a Russian fighter jet buzzed a U.S. Navy reconnaissance plane over the Mediterranean Sea three times in what the Navy called an "irresponsible" manner. The U.S. P-8A Poseidon aircraft was flying in international airspace on June 4 at the time of the intercepts, Navy officials added.

The Russian SU-35 "conducting a high-speed pass directly in front of the mission aircraft" that caused turbulence "put our pilots and crew at risk," according to a statement from the Navy’s 6th Fleet. The entire encounter lasted almost 3 hours and the U.S. plane was not trying to "provoke this Russian activity."

Florida Republican Sen. Marco Rubio, who is a harsh critic of Maduro, issued a warning to Venezuela while tweeting video images of the fighter jet.

"Venezuela only has 3 fighter jets that can fly," Rubio said on Twitter. "If they ever harmed any U.S. aircraft they would soon have zero."

Fox News' Vandana Rambaran and Lucas Tomlinson and The Associated Press contributed to this report.