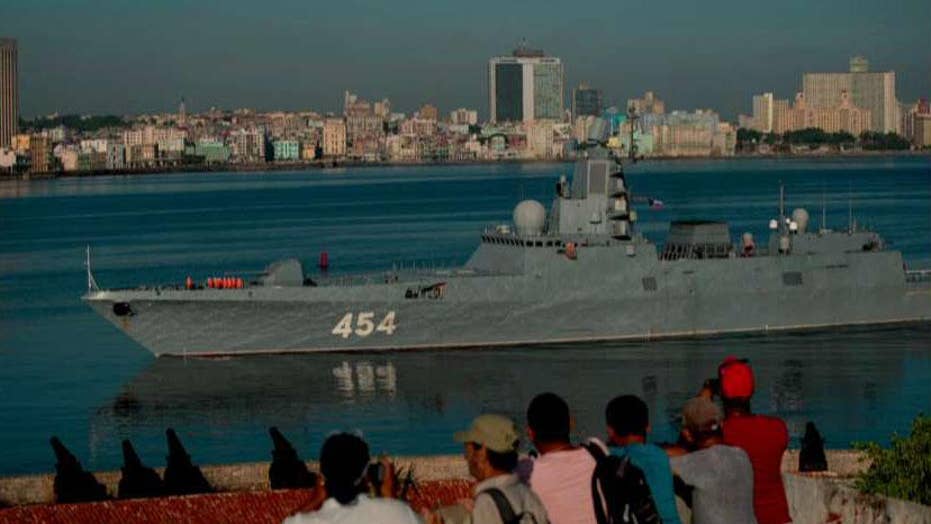 Russian warships arrive in Havana, Cuba in show of force

Royal Air Force jets in Estonia took to the sky to intercept Russian military aircraft for the second time in one day, the United Kingdom’s Ministry of Defense said.

The RAF Typhoon fighters intercepted Russian SU-30 fighters and related military transport aircraft while over the Baltic Sea on the evening of June 14 and during June 15. The RAF has been working with Estonian authorities since May after taking over the Baltic Air Policing mission. This series of interceptions has brought Britain’s incidents with Russian aircraft to a total of 11 since then.

"This was a routine NATO airspace policing mission for the Typhoon detachment providing continued reassurance to the region," the RAF in a statement. "The U.K. operates in support of NATO to reassure our allies and is a further demonstration of the U.K’s commitment to the security of the region."

CAPTION CORRECTS AIRCRAFT NAME - In this photo taken on Saturday, June 15, 2019, a Royal Air Force Typhoon jet, bottom, flies by a Su-30 Flanker fighter. Two Royal Air Force jets deployed in Estonia have been scrambled twice in recent days, bringing the number of intercepts of Russian aircraft to eight since taking over the Baltic Air Policing mission in early May. The Typhoon jets were alerted Friday to intercept a Russian Su-30 Flanker fighter, and passed a military transport craft as it was escorting the fighter over the Baltic Sea. In a second incident on Saturday, RAF crews intercepted a Su-30 Flanker fighter and an Ilyushin Il-76 Candid transport aircraft that was traveling north from the Russian enclave of Kaliningrad toward Estonian and Finnish airspace. (UK Ministry of Defence via AP)

A Typhoon pilot from the XI Squadron who was called onto duty that day said they were sent up between two periods of bad weather.

"We were scrambled to intercept a contact close to Estonian airspace in the early evening," the pilot reported to the RAF. "Shortly after getting airborne, we came alongside a SU-30 Flanker fighter aircraft. We escorted the fighter over the Baltic Sea, around Estonia, and passing over another Russian military transport aircraft in the process."

Russia’s military-related incidents with western democratic nations have been numerous, including frequent activity involving both the United Kingdom and the United States. Their consistent military activity with both countries has caused tensions to run high on the global stage.

Earlier this month, an American warship encountered a near-collision with a Russian destroyer in the Philippine Sea.