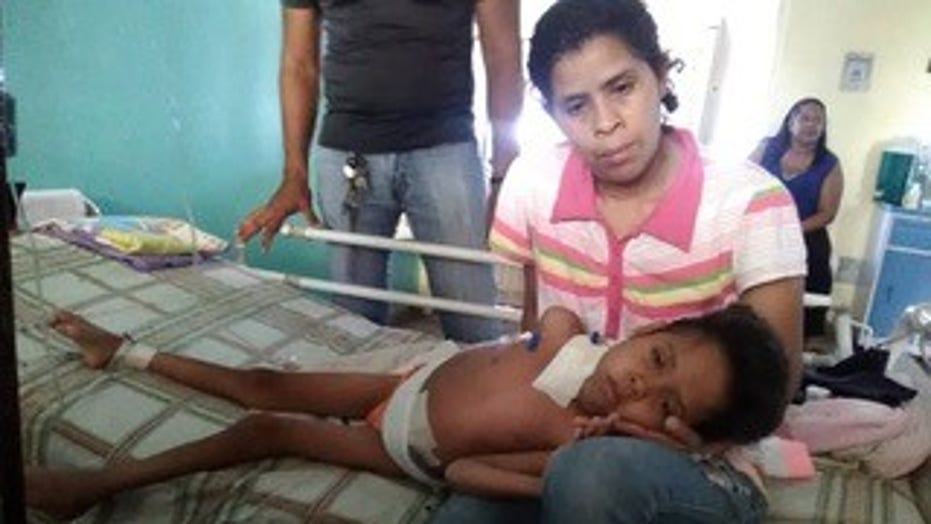 The cries of millions of children still languishing inside Venezuela all too often go unanswered as the deteriorating conditions and the iron-grip of the Maduro regime has set the stage for once eradicated diseases to run rampant, trauma medicine to vanish, infant mortality to drastically spike, and for simple health skirmishes to morph into life-threatening plagues.

“The current health situation is at a very delicate breaking point,” Ephraim Mattos, executive director of Stronghold Rescue & Relief, told Fox News. “We will never know the exact numbers of people who have died due to the corruption of the Maduro government, but what is happening in Venezuela – especially to the children – is nothing short of genocide.”

It’s a fast fall for the oil-swathed nation that was once the richest in Latin America, a nation that prided itself on having the most advanced health care system in the region. But today – following years of devastating socialist economic policies – Venezuela’s system has all but withered – and it’s the youngest who are the most vulnerable.

“One of the biggest health crises facing children fleeing Venezuela is simple dysentery caused by the contaminated food and water they are forced to eat and drink just to survive in Venezuela.  The dysentery causes the children to become even more malnourished and dehydrated which only compounds the issue further,” Mattos, who endeavors to reach some of the most famished and dangerous pockets of Venezuela with vital assistance, said. “Children who should be able to not only survive but also thrive, are needlessly dying every single day.”

Mariano, 6, has skin cancer on his face is living in a destitute hospital in Caracas. His mother has to apply medicinal cremes to his body every six hours. He is not blind, but his eyes are constantly drying out, so he must regularly receive eye drops. (Stronghold Rescue & Relief)

One case Stronghold is purporting to help is that of 6-year-old Mariano, who is residing at a destitute hospital in the capital, Caracas. His mother has to apply medicinal creams to his body every six hours and while he is not blind, his eyes are constantly drying out and drops are desperately needed. In another, a 15-year-old girl with progressive systemic sclerosis in a town outside of Caracas has become so weak with the added onslaught of malnutrition that she can barely walk or talk and is reliant on their covert food deliveries.

Then there is 7-year-old Eric, who passed away from leukemia a few weeks ago. Despite the help, Mattos claimed, his compromised immune system led to a respiratory virus that claimed his life. There is also Lucia, who has congenital heart disease and is urgently in need of a constant supply of colostomy bags. Others have been struck down by other severe heart conditions compounded by the heat, as well as basic cuts that have contorted into mass infections amid the unsanitary environment that now defines Venezuelan life.

Dailis, age 15 has progressive systemic sclerosis lives in a village three hours outside of Caracas in a single-mother household. She is also suffering from severe malnutrition, is so weak that she cannot walk, and is barely able to talk. (Stronghold Rescue & Relief)

Lesly Perez, 23, a medical student trying to help the most vulnerable cases at the San Cristobal Central Hospital, also lamented that the children are not receiving proper nutrition and that even basic vitamin supplements – like Vitamin C – which were once in abundance are next to impossible to track down. Moreover, 22-year-old fellow student Miguel Sanguino noted that their struggle has been further amplified by the fact that their surgery rooms are almost entirely decimated.

Eric, age 7, was suffering from Leukemia and passed away a few weeks ago. (Stronghold Rescue & Relief)

“Of the 11 surgery rooms, just three are working. There is no capacity with medical supplies for tending to emergencies as they arrive,” he said. “There are so many children on the streets, eating from garbage. There are children with cancer who are dying, cancer patients who can’t get treatment, HIV patients without treatment.”

Food is scarcely even available on the market and is most often smuggled from abroad, often arriving expired or overpriced for what most can now afford as dizzying levels of hyperinflation wrack the country. Doctors and qualified health care professionals have also fled the crumbling country in dramatic numbers since the economic downturn began more than four years ago, in their own desperate quest for a future.

Outside the Central San Cristobal hospital in Venezuela (Fox News)

And the Pharmaceutical Federation of Venezuela last year estimated that the country was enduring an 85 percent shortage of medicine, and conditions are continuing to spiral.

Francisco Valencia, a Venezuelan human rights activist and subject in the new Human Rights Watch festival film “Está Todo Bien” – meaning “Everything is Fine” – underscored that children are now coming into the world already suffering from such maladies as severe iron deficiencies. Babies are increasingly being put on formula rather than relying on breast milk, and infections are not able to be adequately treated.

“Venezuela is experiencing a complex humanitarian emergency and has blocked any international cooperation that can alleviate the emergency,” he stressed.

Indeed, aid groups have long been having a tough time to get at least a little alleviation to those who desperately need it, given the Maduro team’s denial over the scale of the problem and finger-pointed toward the U.S. and its allies for waging economic war to eradicate socialism. The regime has further been enraged by the U.S. support of opposition leader Juan Guaido, who in January declared himself the nation’s interim president, accusing Maduro of electoral fraud.

“Before, Venezuela was one of the leading countries in health technology. Now we are using old equipment of the last generation. Children are dying of malnutrition and there are no vaccines,” bemoaned one trauma specialist at the San Cristobal Clinic, who feared retaliation for using his name publicly. “And occasionally if vaccines do come, we don’t know if they have been transported in the proper temperatures and when they arrive there is no light because power plants are not working properly, so it is a risk to even give it to the children.”

A young woman, Nelma, suffering a massive infection after falling over. After more than a year without running water, Nelma’s village temporarily received running water. She was so excited when she found out that she ran out of her house to turn on her dry hose. In her excitement, she fell and cut her self near her butt. Having access to only squatter toilets and unclean water, the cut became infected. She is in desperate need of antibiotics, a surgery, and then medicines to help her recover. (Stronghold Rescue & Relief)

In addition to the polarizing political climate in Venezuela, the transmission of aid and medications are further complicated by the ascending lawlessness and decaying infrastructure. Duran pointed out that the roads are particularly hazardous both physically and in terms of crime, and ambulances are next to non-existent in their region.

“One of the biggest challenges we face when delivering aid to people inside Venezuela is the rival gangs that control the transportation routes around the country,” Mattos explained. “One member of our team was nearly executed by a gang when they discovered he was smuggling food and medicine to several children in a remote part of Venezuela.  They confiscated the supplies, but let him live.”

A U.N human rights report released last week highlighted that the Venezuelan government itself had registered almost 5,300 extrajudicial killings last year associated with cases of “resistance to authority,” of which minors too are often caught in the crossfire.

Tragic photos of a bloodied teen boy, Rufo Chacon, went viral last week when it was revealed that he was made permanently blinded in both eyes after being pummeled with rubber pellets fired into his face by police at a peaceful protest rally near the Colombian border. Local authorities have since denounced the action of officers, and publicly declared that they will be “severely sanctioned.”

Adriana Parada, mother of Rufo Chacon who was left blind after police fired rubber bullets at his face, according to her and a doctor, walks at the Central Hospital of San Cristobal in San Cristobal, Venezuela. (Reuters)

Some 4 million Venezuelans have been forced to flee over the past few years, with tens of thousands each day crossing into neighboring nations in the hopes of scrounging for lifelines before trudging back to their broken lives in Venezuela.

Paloma Escudero, the Global Director of Communication for UNICEF, concurred to Fox News that the UN children’s agency is concerned that Venezuela has reduced children’s access to essential services and increased their vulnerability.

“Under-5 mortality increased by more than half between 2014 and 2017. Venezuela went from being a model for malaria eradication in the Americas, with its northern region declared malaria-free by the WHO in 1961, to becoming the largest contributor to the malaria burden in the region,” she said. “Between 2016 and 2017, reported malaria cases increased by over 70 percent. The number of people who died from malaria increased from 54 in 2010 to 456 in 2017.”

Moreover, there have been 826 suspected measles cases in Venezuela this year alone – bringing the total number of suspected cases to almost 10,000 since the outbreak took hold in 2017. Subsequently, deaths from measles increased from two to 72 between 2017 and 2018, according to the Pan American Health Organization (PAHO).

In addition, UNICEF has recorded 190 suspected cases of diphtheria since the beginning of 2019, leading to 13 deaths.

“Although people from all ages were affected, the highest incidence rate was among children between the ages of 5 to 14,” Escudero said. “It is clear that the health situation is worsening.”

Escudero continued, noted that families are being forced to wake at the crack of dawn to trek their children across the border to the ravished Colombian city of Cucuta, to get them immunized or treated for common childhood illnesses.

“For many families, these trips across the border are a true lifeline,” she added.