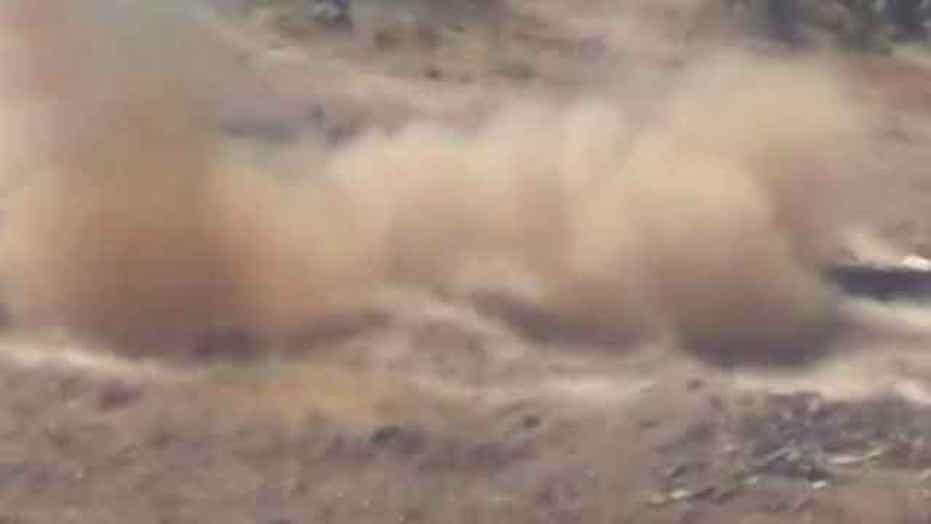 BEIRUT – Syrian government forces pressed their offensive in eastern Damascus on Thursday, bombing rebel-held suburbs where the opposition said the regime had killed more than 100 people the day before in a chemical weapons attack.

The government has denied allegations it used chemical weapons in artillery barrages on the area known as eastern Ghouta on Wednesday as "absolutely baseless."

The U.S., Britain and France have demanded that a team of U.N. experts already in Syria be granted immediate access to the site.

Syrian opposition figures and activists have reported death tolls from Wednesday's attack ranging from 136 to 1,300. But even the most conservative tally would make it the deadliest alleged chemical attack in Syria's civil war.

The Britain-based Syrian Observatory for Human Rights said it had no word on casualties in the Thursday morning bombing. It said warplanes conducted several air raids on eastern and western suburbs of Damascus, including three that took place within five minutes.

Wednesday's alleged chemical attack was said to have killed scores of children, seen in amateur videos as small, lifeless bodies, wrapped in white cloths, their pale skin unmarked by any wounds.

Images of dead children lying shoulder to shoulder in rooms and of others being treated for breathing problems brought worldwide condemnation and shock.

Mohammed Abdullah, an activist in the suburb of Saqba, told The Associated Press via Skype on Thursday that most of the dead were buried hours after the attack in collective graves in different areas in eastern Ghouta. The burials took place quickly for fear the bodies might decompose in the heat, he said.

Relatives identified some of the dead before burial. Unidentified victims were photographed and their graves tagged with a number in case their loved ones come to collect their bodies in the future, Abdullah said.

"Most of the dead were buried in mass graves," he said.

In a statement calling the reports "deeply disturbing," UNICEF said: "This terrible conflict has gone on far too long and children have suffered more than enough.

"Children must be protected, and those who fail to protect them will be held accountable," it said.

From New York, the U.N. Security Council called for "a thorough, impartial and prompt investigation."

Syria's state media quoted a Foreign Ministry official, anonymously according to standard practice, as saying Thursday that allowing the U.N. team to go to Ghouta would require an agreement between the Syrian government and the U.N.

A 20-member U.N. team led by Swedish chemical weapons expert Ake Sellstrom has been in Damascus since Sunday to investigate three sites where chemical weapons attacks allegedly occurred in the past: the village of Khan al-Assal just west of the embattled northern city of Aleppo and two other locations being kept secret for security reasons.

France, meanwhile, raised the possibility of using force in Syria if it is proven that Assad's regime used chemical weapons.

"We need a reaction by the international community, ... a reaction of force," French Foreign Minister Laurent Fabius said. He excluded deploying soldiers on the ground as an option, though, and declined to specify the type of force that could be used.

"Several red lines have been crossed -- if sanctions are not imposed immediately, then we will lose our power to deter," he said.

He added that he had spoken to U.N. chief Ban Ki-moon and told him that "the U.N. must not behave hesitantly anymore, sanctions must now be imposed."

German Foreign Minister Guido Westerwelle said the Syrian opposition's allegations were "so serious, so monstrous that it is necessary to enable a real examination before talking or speculating about consequences."

Russia, Assad's main backer, is balking at tougher action. On Wednesday, Foreign Ministry spokesman Alexander Lukashevich said the accusations appear to be an effort to "create a pretext at any cost" to stop the U.N. Security Council from supporting Assad's foes.

He said Russia's gathered intelligence indicated that the rocket had been launched from positions in a Damascus suburb occupied by opposition forces.

On Thursday, Assad issued a decree introducing a cabinet reshuffle that affected several minor portfolios. According to the reshuffle, Samir Ezzat Amin was named as minister of domestic trade and consumer protection, replacing Qadri Jamil, who retained his post of deputy premier for economic affairs. The reshuffle also affected the ministry of education, economy, industry and tourism.

The last cabinet reshuffle was carried out in February. Thursday's reshuffle likely won't affect any major change in the stance of Assad's government.

In the capital, rebels attacked several army checkpoints Thursday in the neighborhood of Jobar, killing nine soldiers and wounding 10, the Observatory said. Jobar, on the northern edge of Damascus, has endured clashes between troops and rebels for weeks.

The Observatory also reported heavy clashes between al-Qaida-linked groups and Kurdish gunmen in the predominantly Kurdish northeastern province of Hassakeh. The group said the fighting concentrated near a border crossing point with Turkey in the city of Ras al-Ayan that is controlled by Kurdish gunmen.

It said both sides suffered casualties.

The fighting in northeastern Syria has killed hundreds of people in the past months. Earlier this week, the fighting drove a mass exodus of civilians out of the region into neighboring Iraq.

The unrest in Syria began in March 2011 and later exploded into a civil war. More than 100,000 people have been killed, according to U.N. figures.