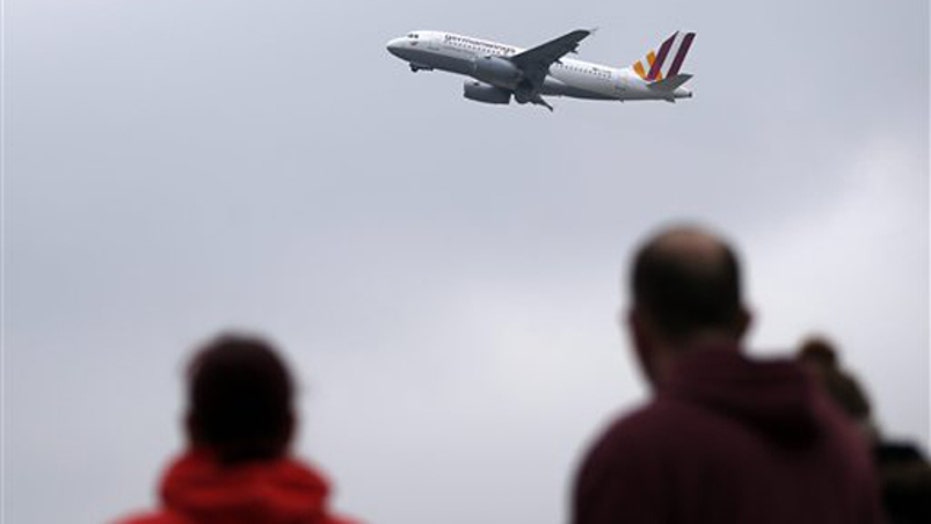 What could have caused Germanwings A320's crash?

A pilot on the doomed Germanwings airliner that went down into the Alps Tuesday apparently was locked out the cockpit moments before the plane crashed, killing all 150 on board, the New York Times reported Wednesday afternoon.

An investigator told the paper that evidence from a voice recorder indicated that the pilot had left the cockpit and could not re-enter. He tried knocking lightly on the door, and when there was no immediate answer, he began knocking more loudly.

Finally, the source told the Times, audio on the recorder revealed: “You can hear he is trying to smash the door down.”

The source said investigators did not yet know why the pilot left the cockpit. French aviation investigators said earlier Wednesday that they had not the "slightest explanation" for what happened.

More details about the fatal flight have emerged one day after the crash. The State Department said three Americans were on board: Yvonne Selke, a government contractor from Northern Virginia; her daughter Emily Selke, a 2013 graduate of Drexel University in Philadelphia; and a third American who authorities did not immediately identify.

The Germanwings A320 lost radio contact with air traffic controllers over the French Alps on a seemingly routine flight from Spain to Germany.

Remi Jouty, the director of France's aviation investigative agency, said the investigation could take weeks or even months. He said the plane was flying "until the end" -- slamming into the mountain, not breaking up in the air.

He said the final communication from the plane was a routine message about permission to continue on its route.

His briefing came after French President Francois Hollande said the second "black box," the flight data recorder, was found but without any of its contents. The crash apparently dislodged the recorder's memory card which is still missing.

“You can hear he is trying to smash the door down."

Search teams found the mangled first black box, the cockpit voice recorder, just hours after the crash Tuesday. Jouty said an audio file was recovered with "usable sounds and voices." But he said it was too early to draw any conclusions from the recorder.

Investigators need the two black boxes to solve the biggest mystery: what caused the Airbus to descend over an 8-minute period without any pilot indication the aircraft was in trouble. The experienced pilot had the plane at 38,000 feet, but only for a minute. Then suddenly and inexplicably, the jet descended to 6,000 feet apparently still under control and without a single distress call or a request for permission.

French investigators are focused on the final seconds before air traffic controllers lost contact with the plane.

One official, Segolene Royal, France's Minister for Ecology, Sustainable Development and Energy, said Wednesday that the pilots stopped responding to radio calls after 10:31 a.m. local time, about 30 minutes into the flight. She said that the seconds after 10:30 a.m. are considered vital to the investigation.

The grim task of recovering bodies from the rugged terrain resumed Wednesday as investigators tried to piece together the many puzzles surrounding the crash.

The single-aisle, medium-haul plane operated by a subsidiary of Lufthansa was less than an hour from completing its scheduled flight to Dusseldorf from Barcelona Tuesday morning when it unexpectedly went into a rapid descent, losing contact with air traffic controllers on the ground.

France's civil aviation authority said the pilots had not sent out a distress call before losing radio contact with their control center. The Wall Street Journal reported that air traffic controllers issued an alarm after the plane disappeared from their radar screens. Moments later, the paper reported, the French military ordered a fighter jet to the area where the plane was last tracked.

The secretary-general of France's air traffic controllers union told the Journal that the plane did not appear to deviate from its flight plan as it went down, which is unusual for an aircraft in distress.

"If there’s a loss of control, pilots usually lose their way too," Roger Rousseau told the Journal. "That didn’t happen in this case."

The wreckage was located at an altitude of about 6,550 feet at Meolans-Revels, near the popular ski resort of Pra Loup. The remote site is 430 miles south-southeast of Paris. French Interior Ministry spokesman Pierre-Henry Brandet said the crash site covered several acres, with thousands of pieces of debris, "which leads us to think the impact must have been extremely violent at very high speed."

He said the crash left pieces of wreckage "so small and shiny they appear like patches of snow on the mountainside."

"This is a true tragedy, and the visit her has shown us that," Merkel said.

Most of the victims were from Germany and Spain.

Yvonne Selke was assigned to the National Geospatial-Intelligence Agency, the Pentagon’s secretive satellite mapping office, under a contract with Booz Allen.

“Every death is a tragedy, but seldom does a death affect us all so directly and unexpectedly,” NGA Director Robert Cardillo said.

Booz Allen’s Betty Thompson said Selke had been a dedicated employee for 23 years.

Her husband, Raymond Selke told The Washington Post he was too grief-stricken to give details or discuss the crash.

The family told WUSA-TV that the entire family was deeply saddened. “Two wonderful, caring, amazing people who meant so much to so many,” the statement said. “At this difficult time we respectfully ask for privacy and your prayers."

Emily Selke graduated from Drexel University where she was a member of a sorority, Gamma Sigma Sigma. The sorority posted condolences on its Facebook page.

"She embodied the spirit of Gamma Sigma Sigma," the sorority said. "As a person and friend, Emily always put others before herself and cared deeply for all those in her life."

Drexel said Emily Selke graduated with honors in 2013 and was a music industry major.