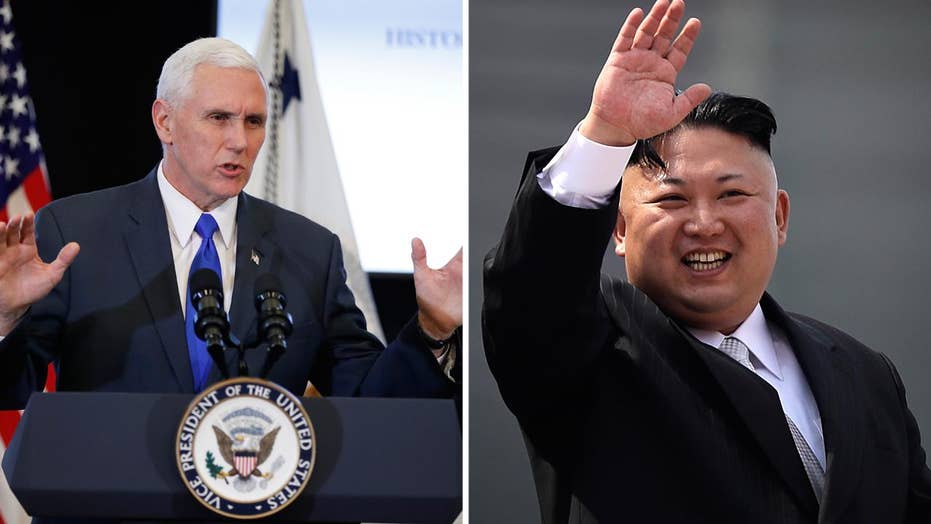 WH pressures N. Korea to stand down from weapons programs

Vice President Pence referred to the Obama policy and said the era of strategic patience is over; Greg Palkot reports for 'Special Report'

PYONGYANG NORTH KOREA – We knew we were coming here at a newsy time. We didn’t expect it to be this intense.

The county’s banned nuclear and missile programs are riling the Trump administration. And Fox News found the officials on the ground in Pyongyang, publicly at least, standing their ground – albeit nervously.

The government official who was assigned to Fox News (everyone gets a "minder" when they're in the country, Fox got two) was open about his belief that the U.S. had hostile intentions toward North Korea and his country would respond in kind.

Talk from the Trump administration that all "options are on the table" only helps feed a narrative the regime has been pushing for years: That the imperialist U.S. enemy is eager to invade North Korea.

The huge military parade Fox News attended over the weekend bristled not just with missiles and tanks but tough-shouting, well-armed troops ready to fight to the finish.

This was echoed to some degree by U.S. and South Korean troops Fox News spent time with during military exercises in South Korea the prior week. Several American officers told us they were ready to ‎"fight tonight" if threatened.

‎As for whether North Korea will be giving up its missiles and nuclear bombs – our government representative rejected that. To paraphrase his reply: Forget about it.

Arguably the top North Korea expert around, Andrei Lankov, told us the same thing when we met with him in Seoul a few days before our visit.

"For a change, they are quite honest," he said, "they say they want to become a true nuclear state and they will soon become such."

Or will they? Not if the Trump administration has its way. There is discussion of more sanctions, forcing China to apply pressure to ally Pyongyang, strengthening regional defenses.

All strategies, experts note however, which have been tried before. Even a military strike was looked at during the Clinton administration.

As for Pyongyang itself, it has been five years since we were last there. The North Korean capital has a new bustle. Cars, taxis, trucks and trams filled the streets. Well-dressed women and men walked the boulevards.

And the skyline has changed. The Soviet-style architecture is dwarfed by a number of high-rises. As well as more shops, kiosks, and markets.

Lankov, the North Korea expert, warned us about this as well.

Lankov further noted the gains are not big or evenly distributed. Likewise, political repression of the public and crackdowns on the inner circle continue. Important survival tools for the savvy young North Korean leader.

Probably the best hope for achieving change and avoiding calamity might come down to one word: Information. More and more, people in North Korea are learning about the outside world in a range of digital forms...otherwise strictly forbidden by the government.

"Spread of information about the outside world,” Lankov said, “threatens the legitimacy of the regime."

The presumption is as the people of North Korea learn more about how others live, they will eventually turn against the government.

The hitch is that it could take time the U.S. doesn't look like it has.

And so, all of this leaves the people of North Korea ‎caught in the middle.

While ‎Fox News’s reporting in Pyongyang was carefully monitored by the government, the people who we saw and met with during these visits are real.

It’s not hard to read into a smile from one person, a kind gesture from another, a wave or an agreed-to selfie from still others that they probably simply want for their families what everyone wants: a happy, satisfied life.

‎All on hold for the North Korean people courtesy of some insane regional geopolitics.