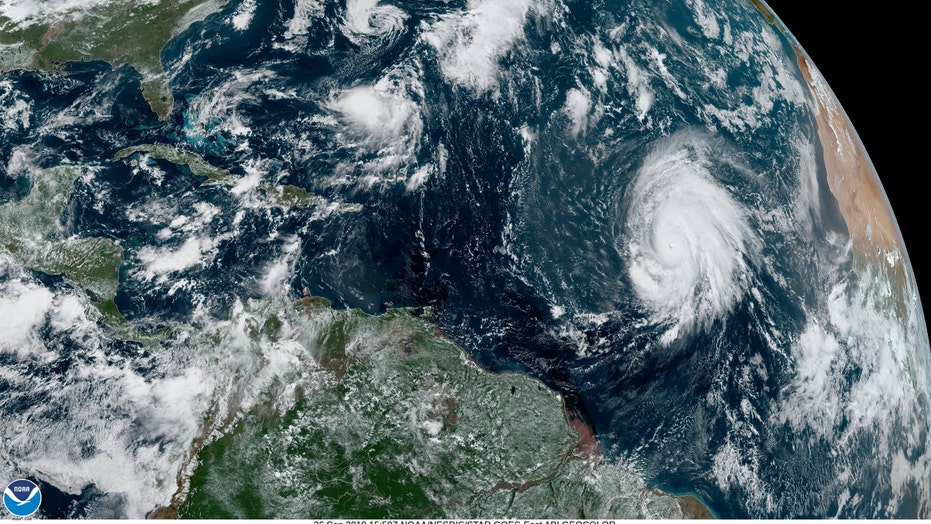 The fifth hurricane of the 2019 Atlantic hurricane season roared in the open ocean on Thursday, strengthening into a Category 4 storm as another tropical system closer to the U.S. is forecast to weaken by the weekend.

The National Hurricane Center in Miami said that as of 11 a.m. Lorenzo is a Category 4 hurricane with maximum sustained winds of 130 mph, moving west-northwest at 13 mph and is located about 1,055 miles west of the southernmost Cabo Verde Islands.

"Additional strengthening is possible today, and fluctuations in intensity are expected tonight through Friday night," the NHC said.

Hurricane Lorenzo can be seen swirling in the eastern Atlantic on Thursday. (NOAA/GOES East)

Lorenzo is forecast to remain far out over the eastern Atlantic, making a turn to the northwest by Thursday night into Friday.

"Very happy that #Lorenzo is turning out to sea- that is a beastly hurricane," tweeted Eric Blake, a meteorologist at the National Hurricane Center. "You won’t find anything comparable in that part of the basin for strength and size except for Gabrielle 1989, and that was several degrees west."

As the storm has developed and strengthened, a well-defined eye can now be seen on satellite.

Colorado State University hurricane research scientist Phil Klotzbach noted on Twitter that Lorenzo has another notable distinction: It's now the only Atlantic hurricane on record to reach Category 4 intensity this far east, except for Hurricane Julia in 2010.

As Lorenzo roars to life, another tropical system closer to the U.S. is on the outs.

The NHC said that Tropical Storm Karen is located about 405 miles south-southeast of Bermuda, moving north-northeast at 14 mph with sustained winds of 45 mph.

The storm has been swirling in the ocean since impacting Puerto Rico and is forecast to make a slow, clockwise loop before ultimately moving westward by early Sunday. Forecasters believe that Karen will weaken by the weekend, and become remnant low by Sunday.

"Still watching the tropics, although it appears that Karen and Lorenzo will not impact the U.S.," Fox News Senior Meteorologist Janice Dean said Thursday.