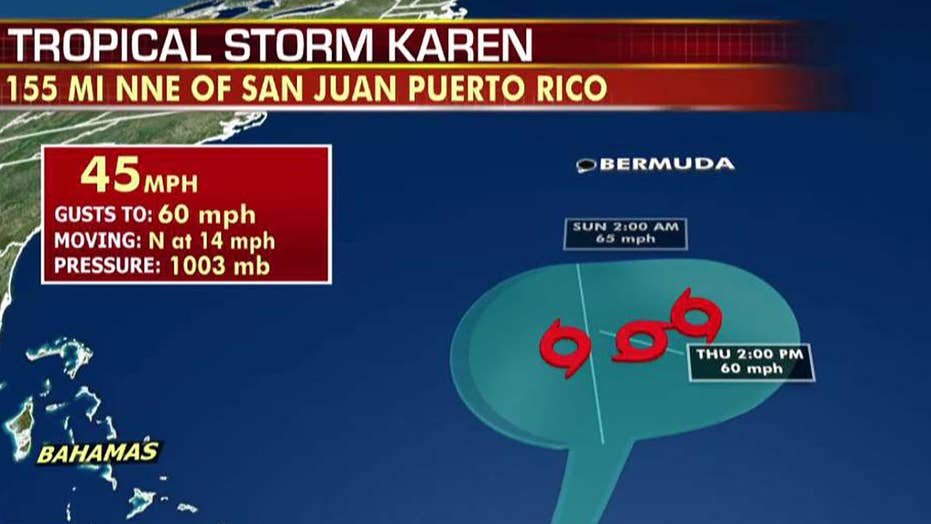 A strengthening Lorenzo grew Wednesday morning into the fifth Atlantic hurricane of the season and is forecast to keep strengthening as another storm continues to swirl away from Puerto Rico.

The National Hurricane Center in Miami said that as of 11 a.m. Lorenzo is located about 715 miles west of the southernmost Cabo Verde Islands. The storm, a Category 1 hurricane, has maximum sustained winds of 85 mph and moving west-northwest at 17 mph.

"Additional strengthening is forecast during the next couple of days, and Lorenzo is forecast to become a major hurricane by Thursday," the NHC said.

Three tropical systems are currently churning out in the Atlantic basin. (Fox News)

Lorenzo is forecast to remain far out over the eastern Atlantic, making a turn to the northwest by Thursday night.

Closer to home, Tropical Storm Karen has moved away from Puerto Rico and the Virgin Islands but is still bringing heavy rains to parts of the area. The storm currently has maximum sustained winds of 45 mph and is moving north at 15 mph, located about 240 miles north-northeast of San Juan, Puerto Rico.

Around one to two additional inches of rain are forecast to call across Puerto Rico and the Virgin Islands, according to the NHC.

"These rains may cause flash flooding and mudslides, especially in mountainous areas," the agency stated. "Some areas in southeastern Puerto Rico have already received up to five inches of rainfall, which has caused some flooding."

While Karen has moved back into the southwestern Atlantic, the storm is not expected to head out into the sea.

The forecast track of Tropical Storm Karen is not fully known after this weekend. (Fox News)

"It's going to stall out, and perhaps come closer to the Bahamas or the U.S.," Fox News Senior Meteorologist Janice Dean said on "Fox & Friends." "So that's something we're going to have to watch over the next couple of days."

Lorenzo is the 12th storm and fifth hurricane of the 2019 Atlantic hurricane season.