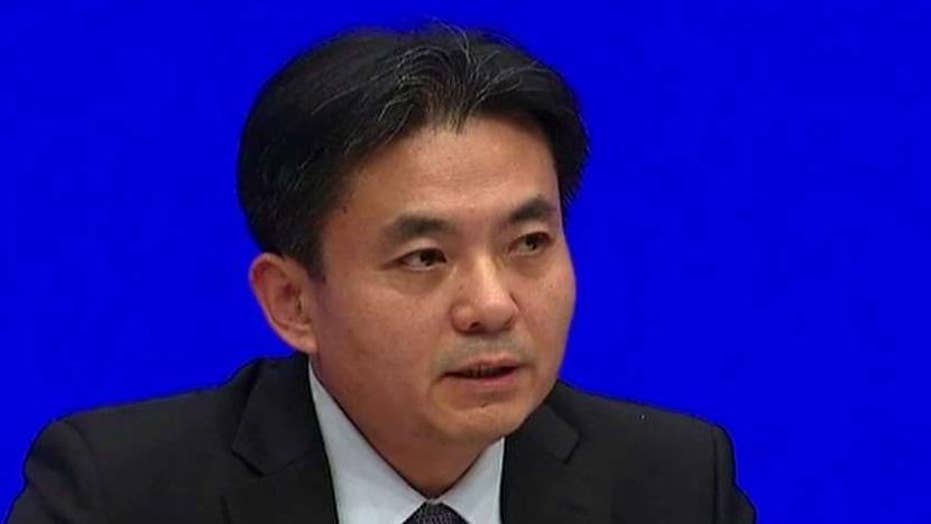 Another weekend of violent clashes between protestors and police in Hong Kong spurred officials in China on Monday to blame Western forces for the strife -- while also calling for authorities to take more "forceful" action to restore order in the city.

Police fired tear gas and rubber bullets for the second night in a row to drive back protestors blocking Hong Kong streets on Sunday night, as the protests in the Chinese territory continue to escalate. Protesters had occupied two areas at opposite ends of central Hong Kong on Sunday following a mid-afternoon rally against police use of tear gas at a demonstration the previous weekend.

"At the end of the day, their intention is to create trouble in Hong Kong, make Hong Kong a problem to China, in order to contain China's development," Yang Guang, spokesman for the Chinese Cabinet's Hong Kong and Macao Affairs Office, said at a news briefing.

Yang also pointed blame at "irresponsible people" in the West that were sympathetic and tolerant to "violent crimes" while criticizing the police force's "due diligence."

A protester throws a tear gas canister which was fired by riot police during a protest in Hong Kong, Sunday, July 28, 2019. (Ring Yu/HK01 via AP)

The protests in Hong Kong began in early June as a call to withdraw an extradition bill that would have allowed people in the former British colony to be sent to stand trial in mainland China, where critics say their legal rights would be threatened.  Even though the government indefinitely suspended the legislation, demonstrators are still demanding greater democracy and government accountability.

The continued protests have spurred Chinese state media to call for a greater crackdown on demonstrators.

Witnesses say the attackers appeared to target commuters who attended anti-government protests earlier in the day.

“At a time like this, the Hong Kong Special Administrative Region government and the police should not hesitate or have any unnecessary ‘psychological worries’ about taking all necessary steps [to restore order],” China's People's Daily tabloid said Monday. The paper is a mouthpiece for the communist party, according to the South China Morning Post.

Authorities will soon have three new anti-riot vehicles with water cannons that are expected to hit the streets in mid-August if they pass road tests, the South China Morning Post reported.

Hong Kong's government and police force have said the protests have placed considerable strain on their officers, who are dispatched in large numbers for the protests, which occur at least once a week and generally go late into the night despite repeated appeals to disband. Yang said the Chinese government firmly supports the police in Hong Kong.

Hong Kong authorities said these pressures made it difficult for police to act immediately when a band of white-clad assailants beat people inside the Yuen Long train station on July 21.

Protesters use umbrellas to shield themselves from tear gas fired by policemen as they face off on a street in Hong Kong, Sunday, July 28, 2019. (AP Photo/Vincent Yu)

Protesters said the slow police response to that attack indicated that officers were colluding with the attackers — an allegation that authorities have refuted. Last Monday, police arrested six men in connection with the attack, including some linked to triad gangs.

Pro-Beijing lawmakers in Hong Kong said the "general wishes" of the city's residents are for the violence to stop immediately.

"Regardless of your stance, I think all this violence should not continue because it brings no benefit to any person," said legislator Starry Lee.