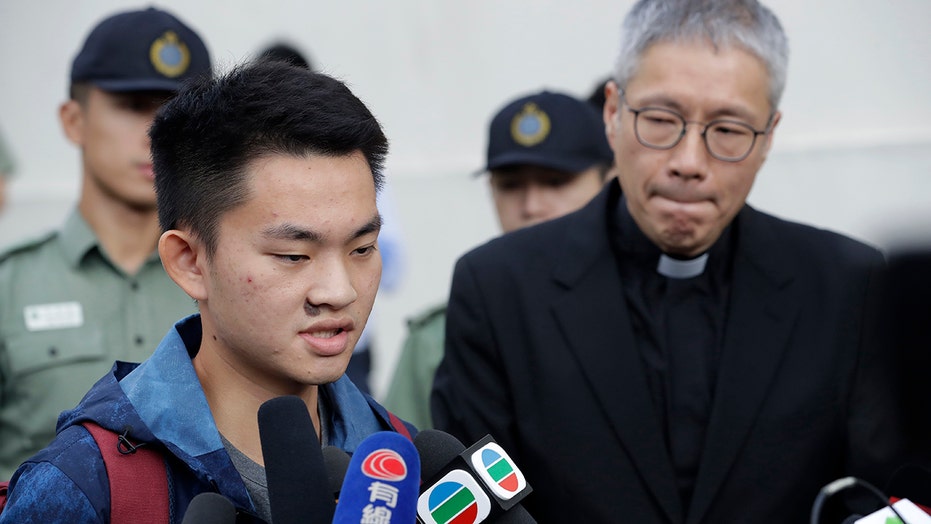 The murder suspect whose case sparked the months-long protests in Hong Kong walked out of prison Wednesday, reiterating his willingness to turn himself over to Taiwanese authorities.

Chan Tong-Kai has been accused of killing his pregnant girlfriend, Poon Hiu-wing, during a trip to self-ruled Taiwan in February last year.

Upon his return to Hong Kong – less than a day after the alleged killing – he was arrested and convicted on money laundering charges related to his use of Poon’s property. He was sentenced to 29 months in jail.

DISNEY'S BOB IGER REFUSES TO WEIGH IN ON CHINA: CAN'T 'HARM OUR COMPANY'

At the time, Hong Kong authorities did not pursue a murder charge, arguing they lacked jurisdiction, the Wall Street Journal reported.

Additionally, authorities could not send him back to Taiwan because Hong Kong does not have an extradition agreement with the island.

Beijing-friendly Carrie Lam, the chief executive in Hong Kong, proposed an extradition bill that also included allowing prisoners to be sent to mainland China to face prosecution. This sparked fears that the bill would allow for the transfer of suspects to China for trial in its more opaque judicial system.

Months of violent protests have ruled the streets of Hong Kong since Lam proposed the bill. In an effort to quell the demonstrations, the government formally withdrew the bill on Wednesday.

Chan, 20, was released early on good behavior and time served. Wearing a blue shirt and a red backpack outside of a maximum-security prison, Chan bowed deeply twice and apologized to Poon’s family and to the people of Hong Kong.

Chan Tong-kai, left, bows after talking to the media as he is released from prison in Hong Kong Wednesday. (AP)

He also reiterated that he is willing to surrender to Taiwanese authorities and face trial.

“I am willing, for my impulsive actions and things I did wrong, to surrender myself, to return to Taiwan to face sentencing and stand trial,” he said during a media scrum outside of the prison.

Last week, Lam said they had received a letter from Chan claiming he was willing to turn himself in.

Hong Kong officials said Chan is now a free man and can simply surrender to Taiwan. However, Taiwanese officials said they want Hong Kong to return him through a formal legal process.

“The accused person has already indicated his willingness to surrender and it should be handled quickly without hindrance so that justice is done,” John Lee, Hong Kong’s security secretary, told reporters Wednesday. “I urge the Taiwanese government to see how they can accept the accused person surrender, giving the best facilitation, rather than laying all the hurdles and restrictions.”

According to court documents, Chan and Poon allegedly got into an argument in the early hours of Feb. 17, 2018, over how their luggage should be packed.

The WSJ reported they also got into an argument after she allegedly told him that the baby’s biological father was her former boyfriend and even showed him a video of her having sex with another man.

Chan admitted to police that he killed her and buried her in a grassy area in Taipei after putting her body in a suitcase. He kept her iPhone, a digital camera and her ATM card, which he used to take out the equivalent of about $3,100 in total while in Taipei and in Hong Kong.

Her body was later found.