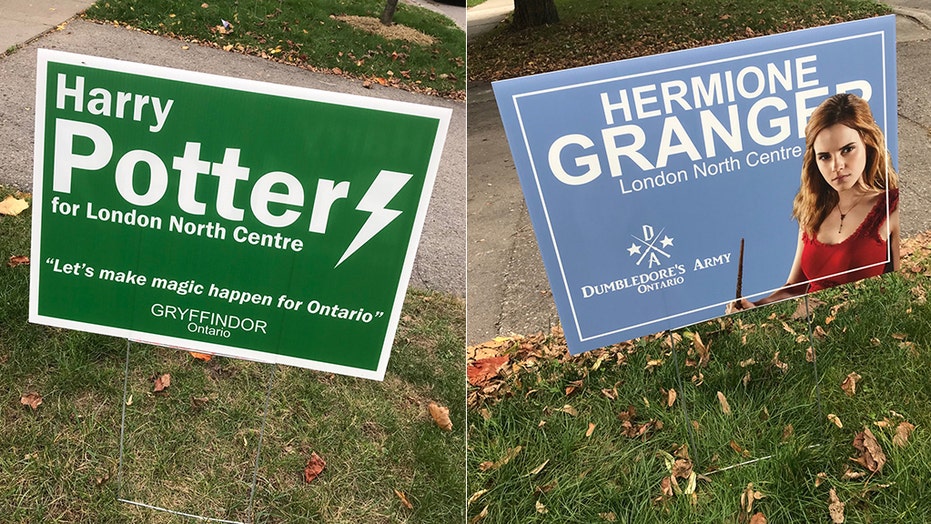 It's election season in the Wizarding World, apparently.

The signs were placed around the neighborhood by Wes Kinghorn on Saturday ahead of the Canadian federal election on Oct. 21, according to the London Free Press. Kinghorn said he created the signs in an effort to relax tension heading into election day — in which Justin Trudeau vies to hold his seat as prime minister.

Complete with their own political parties, the fictional characters appear to be running for a seat in London North Centre, an electoral district in London.

"Vote Remus Lupin," one brown sign reads in support of the werewolf and one-time Hogwarts teacher. Lupin appears to be running as part of the "The Marauders" political party, and is "fighting tooth and nail for Ontario."

Lord Voldemort appears to already hold a position of power in London North Centre, according to Kinghorn's sign, which states the Dark Lord is seeking reelection. A member of the "Death Eaters" party, Voldemort's sign features an image of the famed Elder Wand and states, "There is no good and evil, there is only power and those too weak to seek it" — a quote said in Rowling's first novel in the series, "Sorcerer's Stone."

Running for office as a member of "Dumbledore's Army," a vigilante group of students created in Rowling's fifth book, "Order of the Phoenix," Hermione Granger is also running. Granger was a gifted student and witch throughout the series and was involved in the liberation of house-elves during her time at Hogwarts. Rowling said Granger went on to work as a "progressive voice" in several different roles regarding magical law.

And finally, campaign signs for The Boy Who Lived appear simple: "Let's make magic happen for Ontario." Harry Potter appears to be running as part of Gryffindor, one of the four student houses at Hogwarts. It's unclear who, if anyone, Ron Weasley, Harry's best friend, was backing in the election lest he be accused of divided loyalties.

Kinghorn, for his part, said word of the campaign signs spreading has "been a total shock, it's really just a small thing, super local" that he described as "a real pleasure."

“Elections can be divisive,” he told the Free Press. “I thought it would be kind of cute if, instead of seeing signs that were maybe at the moment dividing their parents and the world, they could see a whole bunch of signs they could get behind.”