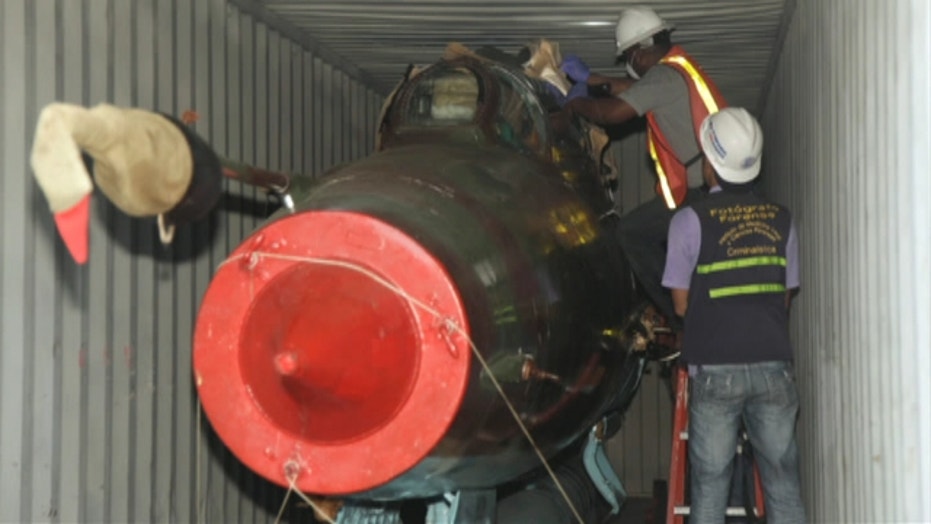 Investigators looking inside the North Korean ship detained in Panama last week with Cuban weapons have made yet another discovery, this time the kind with wings.

The ship, which sailed Cuba en route to Panama, was seized a week ago after officials discovered weapons system parts buried under hundreds of sacks of sugar.

Cuban authorities have already admitted that the ship was transporting missiles but said it they were "obsolete" and had been shipped out to be repaired and returned to the island.

They also detailed that among the findings were two the two Mig-21s — and 15 engines for the planes.

Panamanian President Ricardo Martinelli, accompanied by the country's Attorney General Ana Belfon and Javier Carballo, the anti-drug prosecutor, visited the ship docked in Port Manzanillo in a province 50 miles north of the capital.

According to Caraballo, the fighter planes were found in containers hidden underneath thousands of tons of sugar and had been unloaded over the past few days.

"In the containers that we've opened up to now we have found two fuselages of Mig-21 jets, we've also found some anti-aircraft radars, of the type to launch anti-aircraft weapons," Caraballo told reporters at the port on Sunday.

Up to now seven containers have been unloaded and opened.

Martinelli said it was suspected that many more containers hidden under sugar still remain to be unloaded and searched.

"It appears there are 27 containers. As you can see we're doing the work and opening them one by one to make an inventory of everything," he said.

Also at the port was Panama's attorney general, who said there was a strong smell of fuel after the containers were opened.

"You are all here and are sensing the strong smell of fuel, to such a degree that no one can know what danger Panama was put in," Ana Belfon told reporters.

The government has said a team of technical experts from the United Nations is expected in Panama during the first week in August to inspect the cargo and determine if it violates the arms embargo currently in place against North Korea.

The ship's crew has been charged with violating the country's national security, transporting military equipment and not declaring it.

The North Korean captain of the ship tried to commit suicide when discovered and 35 crewmen were arrested after resisting police efforts to intercept the ship.

Under current sanctions, all U.N. member states are prohibited from directly or indirectly supplying, selling or transferring arms, missiles or missile systems and the equipment and technology to make them to North Korea, with the exception of small arms and light weapons.

The most recent resolution, approved in March after Pyongyang's latest nuclear test, authorizes all countries to inspect cargo inside or transiting through their territory that originated in North Korea.

It also lets countries inspect cargo destined for North Korea if a state has credible information the cargo could violate Security Council resolutions.

The discovery aboard the freighter Chong Chon Gang was expected to trigger an investigation by the U.N. Security Council committee that monitors the sanctions against North Korea.

If Cuba wanted to send the weapons for repairs and have them returned, it would have needed to get a waiver from the Security Council committee monitoring the North Korea sanctions.

The revelation that Cuba was shipping the arms is expected to jeopardize slowly warming ties between the U.S. and the island country — including bilateral migration talks, which had coincidentally just started last week, as well.

Experts said the equipment found aboard the North Korean vessel does not pose a military threat to the United States or its allies.