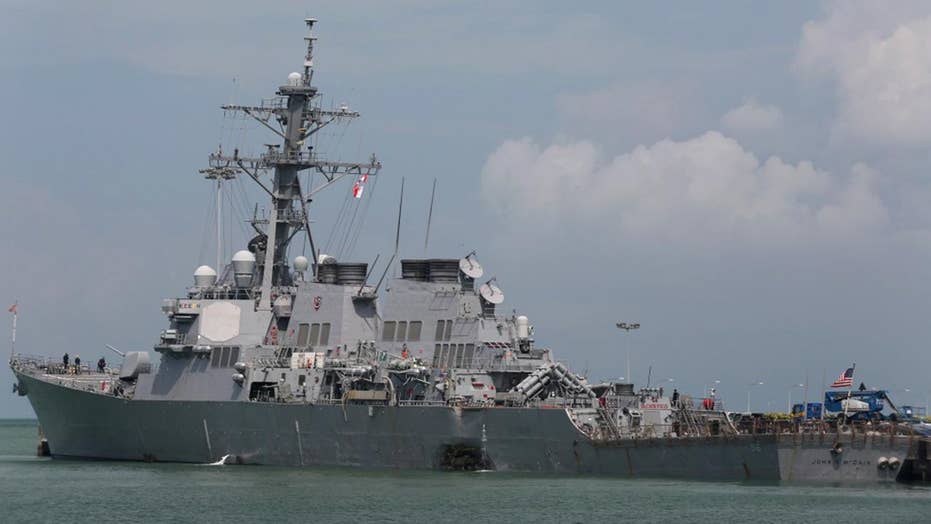 A Chinese newspaper on Monday castigated the U.S. Navy for being more of a "dangerous obstacle" than a protective force while sailing through Asia-Pacific waters -- the written rebuke coming as the Navy chief ordered a wide investigation of the Pacific Fleet following two recent collisions that left at least seven sailors dead.

China Daily published the editorial saying the U.S. Navy, despite its claim to protect the "freedom of navigation" in the South China Sea, is becoming a "hazard" in the region after two significant collisions. The stern editorial came hours after USS John S. McCain collided with a 600-foot Alnic MC -- an oil and chemical tanker -- early Monday morning, injuring five sailors and leaving 10 others missing.

"The US Navy, which likes to claim its presence can help safeguard 'freedom of navigation' in the South China Sea, is proving to be an increasing hindrance to ships sailing in Asian waters," the newspaper wrote.

Monday's collision is the second in two months, the previous instance coming in June, when the USS Fitzgerald collided with a merchant ship off the Japanese coast, killing seven U.S. sailors.

Citing both the USS Fitzgerald and the USS John S. McCain incidents, the Chinese newspaper said the "sloppiness" of the Navy crews and the U.S. warships sailing "without observing maritime traffic rules" is threatening the safety of sailing through Asian waters.

"While the US Navy is becoming a dangerous obstacle in Asian waters, China has been making joint efforts with the members of the Association of Southeast Asian Nations to draw up a Code of Conduct for the South China Sea and it has boosted navigational safety by constructing five lighthouses on its islands," the editorial stated.

The damaged USS Fitzgerald is docked at the U.S. Naval base in Yokosuka. (AP)

It continued: "Anyone should be able to tell who is to blame for militarizing the waters and posing a threat to navigation."

The U.S. Navy did not immediately respond to Fox News' request for comment.

The Navy announced in August the investigation into the USS Fitzgerald collision found poor seamanship and issues with keeping watch caused the deadly incident.

Damaged part of USS Fitzgerald is seen at the U.S. Naval base in Yokosuka, southwest of Tokyo June 18. (AP Photo/Eugene Hoshiko)

In the aftermath of that incident, the Navy was already looking at changing the qualification process for junior officers and sailors to stand watch on the bridge and in the combat information center, where sailors navigate the ship. The military requires pilots to get eight hours of sleep before flying, but similar regulations do not exist for officers and crews who drive warships -- carrying hundreds of sailors -- through sea lanes.

Navy officers told Fox News there are too many "administrative functions" on the ship and not enough time focused on training — safely navigating the ship. Many captains "lose focus," partly because of all the administrative messages that must be sent and due to inspections.

The blunt Chinese message toward the Navy comes as tensions have risen between the U.S. and China over North Korea. President Trump attacked China on Twitter in late July, saying the rogue regime's neighboring country was "doing nothing" to solve the North Korea issue, declaring China "just talk" and no action.

"We will no longer allow this to continue. China could easily solve this problem!" Trump wrote on Twitter.

China warned North Korea earlier this month it wouldn't come to the country's aid if the U.S. took military action against the nation. Chinese newspaper The Global Times wrote that the country showed "when [North Korea's] actions jeopardize China’s interests, China will respond with a firm hand."

A dispute over man-made islands in the South China Sea has also caused friction between the U.S. and China.