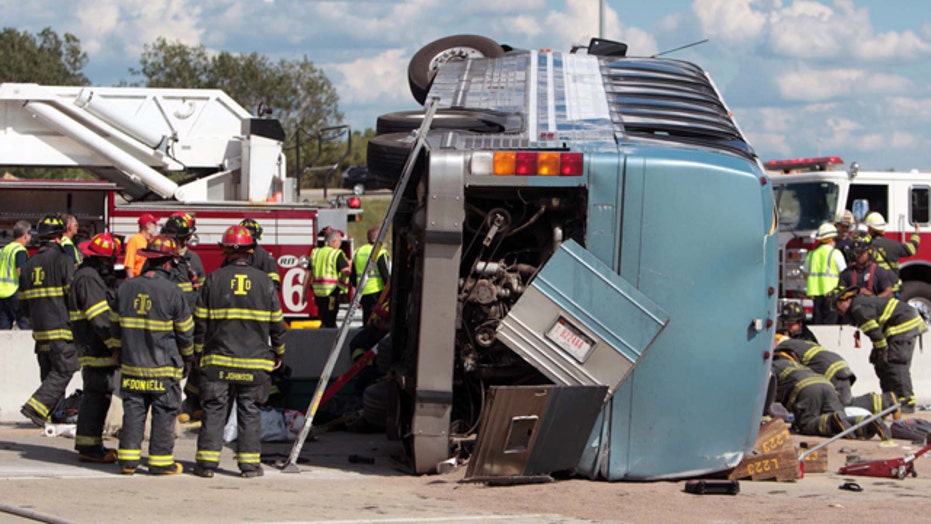 INDIANAPOLIS – The youth pastor of an Indianapolis church and his pregnant wife were among the three dead in this weekend's bus crash, a church leader said Sunday.

Tonya Weindorf, a mother of five who was a chaperone on the trip to the northern Michigan youth camp, also died, Leffew said.

"Our church grieves now. We grieve the fact that they're not here now. We miss them," Leffew said.

Dozens were injured in the crash, which happened Saturday afternoon on an Interstate 465 exit ramp. Bus driver Dennis Mauer, 68, told the Indianapolis Metropolitan Police that the brakes failed and he wasn't able to keep the vehicle from striking a retaining wall and flipping on its side, the Indianapolis Star reported.

A toddler was among the injured passengers, Leffew said, noting it was the Phelps' 2-year-old son. IU Health spokeswoman Sally Winter said Sunday that the toddler had been released from the hospital.

The investigation into the crash is ongoing, authorities said. The bus was nearly finished with a 365-mile journey, overturning just a mile from the church, where parents were waiting to pick up their children after a weeklong camp filled with prayer, zip lines and basketball.

Leffew, 44, of Fishers, had sent four daughters to Camp CoBeAc, near Prudenville, Mich. Only one daughter was on the bus that pulled into the parking lot, and he raced to the crash site in northern Indianapolis. What he found was a surreal scene, with clothing and other items strewn about and windows missing from the bus.

"You're just praying that it's not as bad as it looks," he said. His daughters escaped with just bumps and bruises.

"They were not that far from home. ... That only adds to the tragedy," Riggs said at the crash scene. He said there was no indication that the driver had a medical emergency.

Duane Lloyd told WTHR that he heard a loud noise behind him as he was traveling near the intersection and saw the crash around 4:15 p.m. — about the time Chad Phelps had tweeted that the group would arrive at the church.

"I heard a skid. I looked back. I see this bus in the air and people falling out of the bus," Lloyd said. "I could have gone my whole life without seeing that."

He said people approached and tried to help.

"People were literally trying to lift the bus," Lloyd said. "You just try to do what you can do."

Sasha Sample, 28, told The Indianapolis Star some victims were lying in the road, while others were able to limp to the side.

"Everybody had boils and scrapes on them," she said. "People were trying to climb from under the bus."

Sample, a nurse, said she borrowed a belt to make a tourniquet for the bus driver's arm but wasn't able to help the man next to him, who was already dead.

"I couldn't do anything for him," Sample said. "So you triage. You help those you can."

Families of the bus passengers gathered at the church Saturday evening to comfort each other and pray.

Mayor Greg Ballard described many as "remarkably positive" despite their sorrow, but said there will be difficult days ahead.

"Some of the teenagers are hurting pretty bad and you can see that in their faces," he said.

Leffew thanked rescue workers and good Samaritans who tried to help after the crash, as well as local churches and businesses that have offered their support.

"We are so grateful for that outpouring of love and care," he said Sunday.