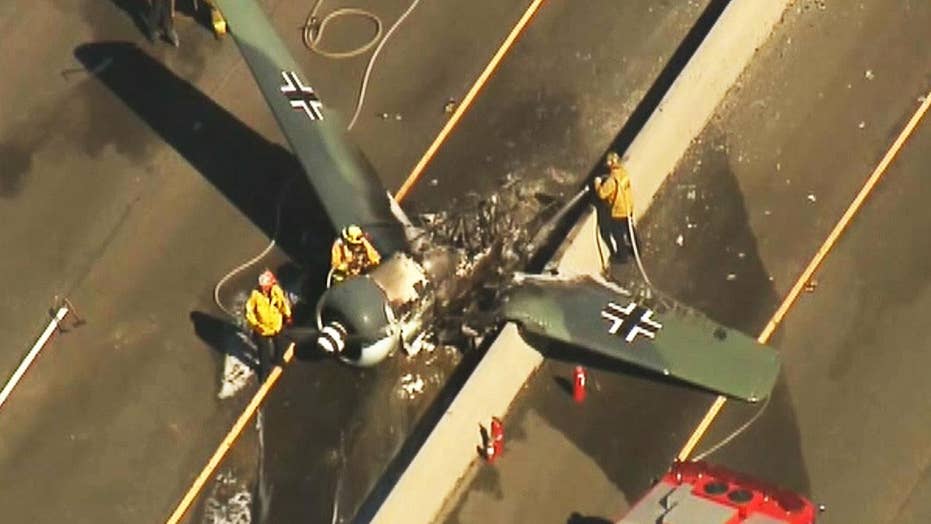 -pPilot walks away from smalllane crash as firefighters put out the flames.

The North American AT-6 aircraft crashed on U.S. 101 in Agoura Hills, striking a center divider before catching fire, the Los Angeles County Fire Department said. The pilot, who was not immediately identified, was safely removed before flames consumed most of the plane.

There was no damage to any vehicles, but the crash intensified traffic about 30 miles west of downtown Los Angeles.

The aircraft, painted in German air force markings, belonged to the Condor Squadron – a group that performs mock dogfights for airshows and flies in formation for other veteran-focused events, according to president Chris Rushing.

He said it was not immediately clear what caused the crash, but the pilot, who flies professionally for Alaska Airlines, was out conducting a training exercise when the plane went down.

A Federal Aviation Administration spokesperson (FAA) said that the National Transportation Safety Board (NTSB) and the FAA would investigate.

The AT-6 was developed in the 1930s and used as a training aircraft by U.S. pilots during World War II.