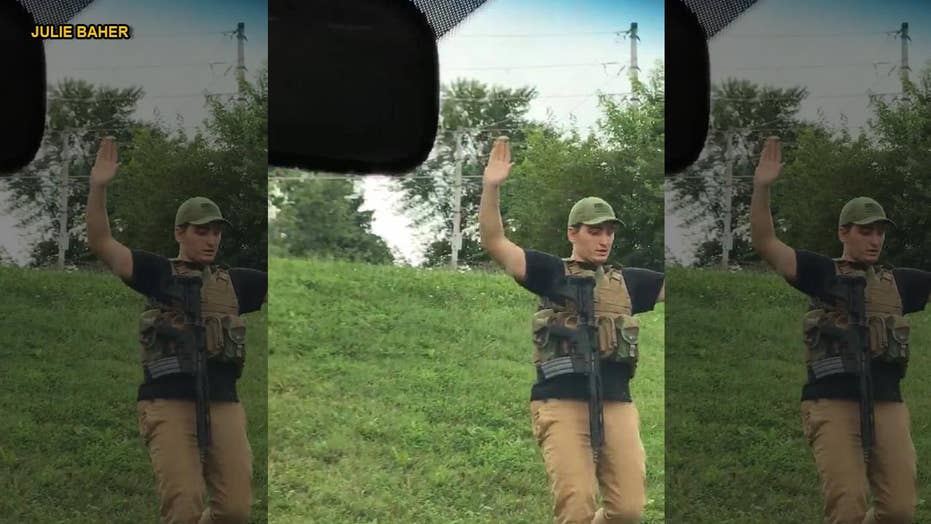 Julie Baher describes the capture of the armed suspect who entered a Walmart on Thursday.

The former firefighter credited with the apprehension of Dmitriy Nickolayvich Andreychenko, suspect in the Missouri Walmart threat that took place Thursday, has remained anonymous.

Andreychenko was charged with making a terroristic threat in the second degree for walking into a Springfield Walmart yesterday in body armor, with loaded rifles and over 100 rounds of ammo.

And Springfield resident Julie Baher was there to watch as it all unfolded.

Baher had driven around the back of Walmart when she heard a voice say, “Is that a real rifle?” This instantly got her attention, then she noticed a man with a gun. “My gaze followed the direction of his gun and I saw across from me a young man with his hands up. … Then the man to my left said, ‘Why are you walking around Walmart wearing tactical jacket, holding an assault rifle?’

"Then I just kind of froze.”

Baher felt protected by the former firefighter as he stood by her car, “He made me feel like he was protecting me because he kind of stood right next to my car. I was really nervous. I didn't understand what was going on. I didn't realize he was not a police officer.” Baher said it wasn’t until later that she discovered that he was an ex-firefighter who had his gun on him.

“I was comforted knowing that there were people around me just ready to disarm him and do what needed to be done.”

After the incident Baher says the Walmart employees were still “shaken up.” “It was very strange to walk into the store because life had just started to go on as normal as if nothing had happened. People were in the store shopping. I could tell that the employees were pretty shaken up and I talked to my cashier about it. But when I walked outside again, the police were all over the place."

She said the Springfield police were super calm, and couldn’t have hoped for a better outcome.

As for the former firefighter, he has been hailed as a hero.