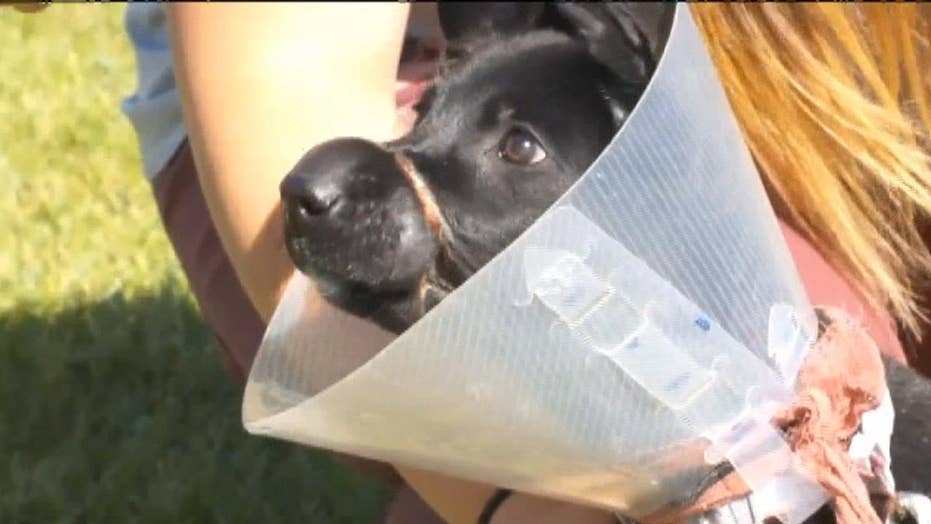 Woman faces a felony charge for abuse of puppy

The veterinarian says it will take about two weeks, but the puppy should fully recover.

A Utah woman is facing a felony charge tied to animal torture, accused of putting a hair tie around a 4-month-old puppy's mouth for as long as two weeks to keep her from barking.

Shadow, a Black Labrador retriever-German shepherd mix,is severely disfigured in the nose and mouth, with a deep, expansive scar and a hole in her face even when she closes her mouth, because of mistreatment by her previous owner. The injuries are so severe she now needs a $2,000 surgery, and it will take at least two weeks to recover from it, according to her veterinarian.

"Left side [of her nose], it's completely open even with her mouth closed,"  Caylla Facemyer, Shadow's new foster mom, said to Fox 13. "You can see into her mouth. It's pretty bad."

Alexis Callen, Shadow's previous owner, admitted that she tied a hair tie around Shadow's mouth for 48 hours to keep her quiet so she could sleep, according to a probable cause statement, but a veterinarian determined the dog was tied up for far longer than that, based on the severity of injuries.

Celestial Zoo Pet Rescue, the organization that placed Shadow with Facemyer, says she will undergo reconstructive surgery next week, but in the interim, the puppy can't eat or drink properly because food and water leak from the opening in her cheek.

"It looks even worse in person," Facemyer said of Shadow's injuries.