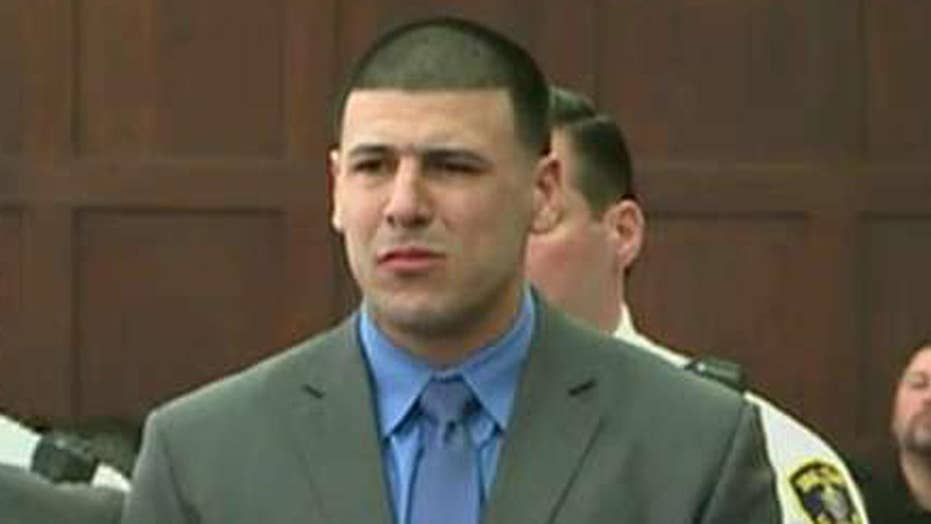 Hernandez committed suicide while serving a life sentence for murder

Aaron Hernandez was an up-and-coming star in the NFL, with a Super Bowl appearance and a place on the league’s dynastic New England Patriots. But even as he starred on the gridiron, he led a dark, double life that included running around with gang members, fits of violence and, eventually, murder charges that would put him behind bars for life.

Early Wednesday morning, Hernandez was found dead in his prison cell inside the Souza Baranowski Correctional Center, in Shirley, Mass.

Born Nov. 6, 1989, in Bristol, Conn., Hernandez attended Bristol Central High School and was named Connecticut's Gatorade Football Player of the Year as a senior in 2006, after scoring 24 touchdowns. Heavily recruited, he initially hoped to play for the University of Connecticut, but changed his mind to attend the University of Florida.

As a freshman for the Gators, Hernandez started three games. The next year, Hernandez helped lead the Gators to the NCAA national championship, playing alongside quarterback Tim Tebow. By his junior year, he had become a star, winning the John Mackey Award, given annually to the nation's best tight end.

At the University of Florida, Hernandez was involved in several alleged scrapes with the law, including a bar fight, marijuana use and was later eyed as a possible person of interest in an unsolved 2007 shooting in Gainesville.

Hernandez elected to skip his senior season and enter the 2010 NFL draft. He was chosen by the New England Patriots in the fourth round and, despite being the youngest player in the NFL, immediately became a key player in the legendary offense directed by quarterback Tom Brady.

But two years later, on Aug. 22, 2013, Hernandez was indicted by a grand jury for the June murder of Odin Lloyd, a semi-professional football player. The Patriots cut Hernandez, and he was convicted of first-degree murder on April 15, 2015.

But even as he was being tried for Lloyd’s murder, Hernandez was indicted for the 2012 double homicide of Daniel de Abreu and Safiro Furtado. Prosecutors said the hulking NFL star had shot the men for spilling a drink on him in a nightclub. On April 14, 2017, he was found not guilty of the double murder, but it made little difference to his future, as he was already serving life in prison for Lloyd’s killing.

Meanwhile, the Patriots won two Super Bowls, including earlier this year, while their troubled former star languished in prison.

At 3:05 a.m. on Tuesday, prison authorities found Hernandez dead of an apparent hanging suicide in his prison cell. The discovery was made hours before his former teammates were to visit the White House to be congratulated by President Trump for their latest NFL championship.