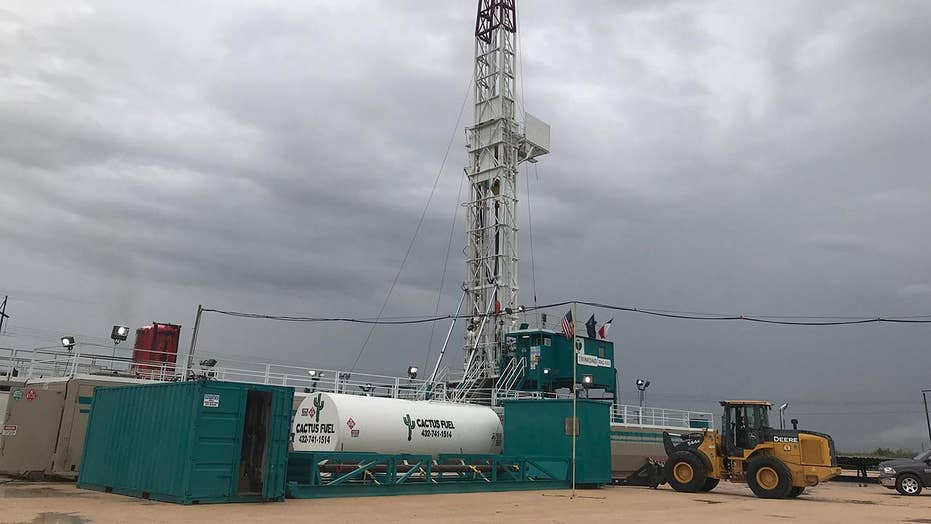 MIDLAND, TEXAS – Hundreds of people are flocking to West Texas, eager to strike “gold” in the Permian Basin, the country’s most prolific source of oil and natural gas.

But the area does not have the infrastructure to support the growth, which producers worry could trigger a slowdown that will grip the industry. There is a plan in place to build facilities that will transport oil out of the region – but it is still months away from fruition.

The Permian Basin is the country's most prolific source of oil and natural gas, producing nearly 3.5 million barrels of oil a day. (Fox News)

"It's been really a Renaissance for us, and as a result of that, we're constrained by our oil and gas lines going to market – those lines are full now," said Tommy Taylor, director of oil and gas development for Fasken Oil and Ranch.

The Permian Basin is a 90,000-square-mile mineral reservoir in West Texas and southeast New Mexico. Since 2010, the region has seen steady growth thanks to enhanced drilling techniques.

“We’ve seen a massive increase in oil production in the Permian, primarily due to the shale plays being developed with horizontal drilling and multistage fracking. We’re bringing our wells at better production rates than ever before,” said Kyle McGraw, chief development officer and executive vice president at Legacy Reserves.

Latest numbers from the Energy Information Administration show production in the region has grown to nearly 3.5 million barrels a day, over a third of the country’s crude oil output.

Several pipeline projects to transport oil from West Texas to markets by the Gulf of Mexico are underway. However, many will not be in service until next year. (Fox News)

It’s led to bottlenecks in the shale basin as the rapid growth largely caught the industry off guard. The current pipes are not enough to transport oil to markets like Corpus Christi and Houston, and the takeaway problem has driven down oil prices in the Permian.

“We actually have a less realized oil price. Instead of the $68 a barrel being posted, we’re actually getting a $15 deduct, so our realized price is substantially below that,” said McGraw.

Several pipeline projects are in the works. However, the majority of them will not be in service until 2019. In the meantime, industry experts say low prices could threaten production.

Taylor said Fasken Oil's growth has been steady. But that could change depending on what happens with the market.

“You see some operators, they’re drilling wells, but maybe they’re not fracturing them yet because they don’t think they can get that oil to market, and they’re waiting for those lines to open up,” Taylor said.

The slowdown could have a ripple effect, Taylor added, particularly compromising the country’s growing energy independence. Total oil production in the Permian will be 5.4 million barrels a day by 2023, more than the total production of any OPEC country other than Saudi Arabia, predicts research firm IHS Markit.

“This is a new phenomenon…it’s really changed the geopolitical dynamic around the world. The Middle Eastern companies, we’re not beholden to them, and that’s really a powerful thing for our country,” Taylor said.

Industry experts believe the pipeline shortage is a temporary roadlblock, predicting that growth in the region will create 60,000 jobs in the next five years. (Fox News)

Some hope the growth continues.

“It’s only in recent times that we’ve been growing this production U.S. wide, especially in the Permian, so if we just roll backwards in that, I’d hate to see that happen,” said McGraw.

Still, McGraw and Taylor believe the roadblocks are temporary, expecting the markets will adjust once the pipelines are built. In fact, both predict their city will continue to grow bigger.

“There’s projections that in the next five years we could need up to 60,000 additional workers just in the Permian Basin region. We need more schools, more housing, better roads. Slowing it down a little bit, waiting on the pipeline is not the end of the world,” Taylor said. “It’s just a bump in the road as this thing builds out.”