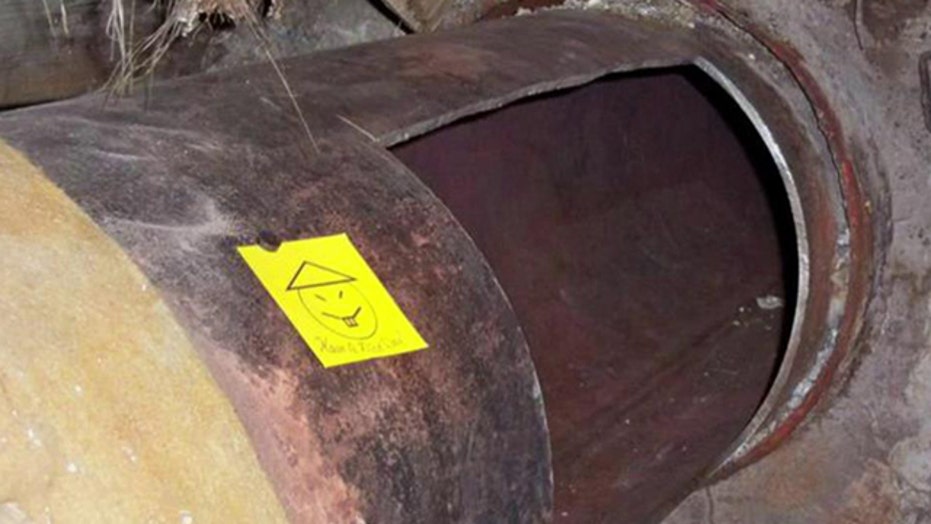 Even in “Little Siberia,” as the upstate New York prison that has housed some of the state's most infamous criminals is known, Richard Matt stood out as a man to be feared.

“A lot of people get killed. Not many killers take the time to dismember the body.”

Matt, 48, along with cop killer David Sweat, 34, became the first inmates in the 150-year history of the maximum security Clinton Correctional Facility, in Dannemora, to escape when they used stolen power tools to cut their way out of their steel-lined cells. The pair remained on the loose Monday after shimmying out a steampipe and emerging through a manhole in a daring escape from a prison that has been home to legendary mobster Charles "Lucky" Luciano, serial killer Joel Rifkin, rapper Tupac Shakur and a host of other serial killers, ax murderers and rapists.

None of the prison's residents over the years have been more dangerous that Matt, according to law enforcement authorities familiar with the violent criminal, who was serving 25 years to life for a 1997 murder and dismemberment and served nine years in a Mexican prison for a murder there.

“You can never have enough security with him,” Gabriel DiBernardo, a retired captain with the North Tonawanda Police Department who was the chief of detectives leading the investigation into the murder of William Rickerson, Matt's former boss, told The New York Times. “You can never trust him. You can never turn your back on him.

“He is the most vicious, evil person I’ve ever come across in 38 years as a police officer,” DiBernardo added.

Matt escaped a jail in Erie County in 1986 and fled to Mexico about a decade later, where he killed an American man at a bar and served prison time as a result. He was sent back to the United States in 2007 to stand trial in Niagara County. In 1992, Matt also was a central figure in a case involving David Telstar, a California man who was with Matt at the Erie County jail.

FBI agents said Telstar paid to have Matt bailed out of the jail and offered him a $100,000 reward to murder four people in Los Angeles, including a cop and Telstar’s wife, the Buffalo News reports. But instead of carrying out the murders, Matt told authorities of Telstar’s offer and became the prime witness against him. Telstar later was sentenced to five years in prison.

Matt was serving time in Clinton for the murder of Rickerson, his boss of a food brokerage company, had previously been linked to a murder-for-hire plot, and has at least one escape attempt from a jail or prison facility, according to a 2008 story in the Lockport Union-Sun & Journal. Matt beat and tortured his former boss in his home, bound him with duct tape and them dumped him into the trunk of a car, the Buffalo News reports. A headless torso found in the Niagara River was identified through DNA testing as belonging to Rickerson.

Matt is regarded to be someone who is “extremely dangerous,” a retired law enforcement official, who spoke on condition of anonymity, told The New York Times.

“A lot of people get killed,” he said. “Not many killers take the time to dismember the body.”

Sweat is serving life without parole for killing a Broome County sheriff’s deputy, Kevin Tarsia, in 2002.

Authorities described the pair as “brutal” and “fearless” men who who have killed before. The escape, which Gov. Andrew Cuomo likened to a movie script, was discovered when prison guards found the men missing from their cells Saturday morning. Cuomo said the men left clothing and other items in their beds to make it appear that they were asleep.

“A search revealed that there was a hole cut out of the back of the cell through which these inmates escaped,” Anthony Annuci, the acting state corrections commissioner, told the AP. “They went onto a catwalk which is about six stories high. We estimate they climbed down and had power tools and were able to get out to this facility through tunnels, cutting away at several spots.”

Before exiting the prison, the men left a yellow sticky note on a pipe, according to news reports.

The prison, New York's largest, houses nearly 2,700 inmates. It derives the nickname "Little Siberia" from its remote location near the Canadian border, where harsh winters are the norm. Among those who have called -- or still call -- the prison home are:

- Luciano: One of the founding fathers of Italian organized crime in the U.S., Luciano served 10 years of a 30- to 50-year sentence at Clinton for running a prostitution ring before being deported to Italy after World War II.

- Rifkin: Known as "Joel the Ripper" by New York tabloids after a five-year killing spree, Rifkin murdered 17 women and is serving 203 years to life.

- Shakur: The famous rapper served 9 months on a sexual abuse conviction in 1995, with some of the time reportedly done at Clinton. One year later, he was killed in a drive-by shooting in Las Vegas.

- Robert Chambers: Known as the "preppy murderer," Chambers served several years at Clinton after being convicted of manslaughter in the 1986 death of Jennifer Levin. Chambers made national headlines when his defense team argued that Levin died during "rough sex" in Central Park.

- Winston Moseley: The killer of Catherine "Kitty" Genovese, whose 1964 death in Queens outside an apartment building became a symbol of neighborhood apathy, Moseley, now 78, remains in Clinton after being denied parole more than a dozen times.

- Gregory Corso: An Italian-American poet who hung out with beatniks Jack Kerouac, Allen Ginsberg and William Burroughs, Corse did three years at Clinton after being arrested for stealing a suit at age 17.

- Jesse Friedman: One of the subjects of the 2003 documentary "Capturing the Friedmans," Friedman pleaded guilty to sodomy and sexual abuse charges related to child molestation in the 1980s.

- Paul Geidel: A 17-year-old New York City bellhop when he robbed and killed a guest in 1911, Geidel served more than 68 years in various New York prisons, including Clinton, before being paroled. He remains the longest-serving prisoner in American history whose sentence ended with release.

- Julio Gonzalez: Angry at his girlfriend, who worked at a Bronx nightclub called Happy Land, Gonzalez set the 1990 fire that burned down the club and killed 87 people.

- Vincent Johnson: A serial killer of prostitutes in the late 1990s who earned the chilling moniker "Brooklyn Strangler," Johnson is serving a life sentence.

- Francesco Pronio: Convicted of the murder of his mistress in 1928, Pronio was sentenced to the electric chair before being declared insane and sent to Clinton. He was to be electrocuted if he ever recovered, but died in the institution in 1968.

- Altemio Sanchez: Known as "The Bike Path Rapist," Sanchez murdered at least three women and raped at least 14 more in and around Buffalo between 1981 and 2006.

As the search for Matt and Sweat continued on Monday, speculation centered around how the men got access to power tools, and whether they had help, either from the inside or outside.

"We're going through the civilian employees and private contractors first," Cuomo said on NBC's "Today" show. "I'd be shocked if a correction guard was involved in this, but they definitely had help. Otherwise, they couldn't have done this on their own, even from the equipment point of view."

Steven Tarsia, brother of Kevin Tarsia, told The Associated Press that finding out his brother's killer had escaped "turns your world upside-down all over again."

He said that just the other day, he found he couldn't remember the names of the men responsible for his brother's death.

"All of a sudden, I remember them again," he said.