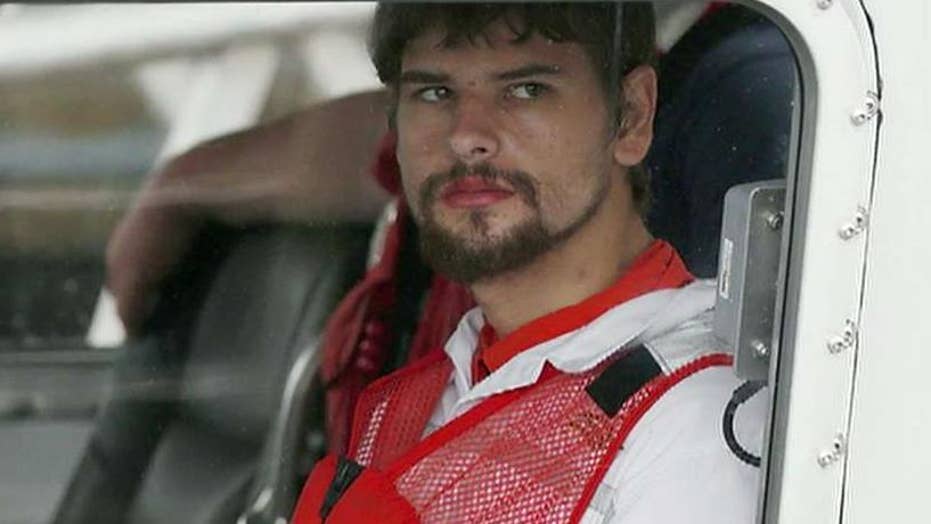 22-year-old Vermont man rescued after being lost at sea

The case of a 22-year-old man rescued at sea after clinging to a raft for a week took a dark turn Wednesday as it was revealed he was a suspect in his grandfather's unsolved murder.

Nathan Carman, the young man rescued in the Atlantic Ocean after floating on a life raft for a week, had been a suspect in the 2013 killing of his grandfather, deepening the mystery surrounding his ordeal and the apparent death of his mother at sea, the Hartford Courant reported Wednesday.

According to a search warrant for Carman's apartment obtained by the newspaper, Carman was the last person known to see his maternal grandfather, John Chakalos, alive on Dec. 20, 2013, when he had dinner with him at his home in Windsor. The 87-year-old Chakalos, a real estate developer, was found dead the next morning. He had been shot three times.

The Courant reported Tuesday that Windsor police submitted an arrest warrant for Carman to a prosecutor, but it was returned unsigned with a request for more information. Carman was not charged.

A will shows John Chakalos left an estate worth more than $42 million to his four adult daughters.

Carman told The Associated Press on Wednesday he had nothing to do with the death of his grandfather and didn't harm his mother.

Carman and his mother, Linda Carman, 54, of Middletown, Conn., left Rhode Island on a fishing trip on Sept. 17. Nathan Carman was rescued in a life raft off the Massachusetts coast on Sunday. His mother remains missing and is presumed dead.

Speaking outside his Vernon, Vt., home Tuesday, Carman said that he'd been through "a huge amount" emotionally, and he thanked the public for its concern and prayers.

Coast Guard officials interviewed Carman when he arrived in Boston on Tuesday. In an audio exchange with the Coast Guard from the Chinese freighter that rescued him 100 miles offshore in the Atlantic, Carman described hearing a 'funny noise" in his boat's engine compartment, seeing water pouring in, then losing sight of his mother before he boarded the raft.

"I was bringing one of the safety bags forward. The boat just dropped out from under my feet," Carman says on the recording. "When I saw the life raft, I did not see my mom. Have you found her?"

After the officer tells Carman they have not found his mother, he describes getting to the life raft.

"I was whistling and calling and looking around, and I didn't see her," he said.

Carman told the Coast Guard his 31-foot aluminum fishing boat sank and he spent seven days in a four-person inflatable life raft. Many questions remain about how the boat sank and what happened to his mother.

Defense attorney Hubert Santos said he's representing Carman. He said Carman "fully cooperated" with the Coast Guard after he was transported to Boston by the freighter that rescued him.

Santos wouldn't reveal what Carman told Coast Guard officials when he was questioned at the base.

"It was a tragic accident," Santos said.

Carman grew up in Middletown, Conn., but bought a home in Vermont two years ago.

Family members have said Carman has Asperger's syndrome, a form of autism.

Sharon Hartstein, a close friend of Linda Carman's, said the mother and son regularly went on fishing trips together.

"That was one of their bonding things," Hartstein said. "When he was available, she tried to make time so she could spend time with him."

Windsor Police Capt. Thomas LePore said Tuesday that the investigation into Chakalos' killing remains open and active. He said police interviewed Chakalos' relatives, including Nathan and Linda Carman, as part of their investigation.

Linda Carman's mother, Rita Chakalos, died of cancer just weeks before her husband was killed. John and Rita Chakalos were philanthropists who split their time between Connecticut and Chesterfield, N.H., where they had an estate known for its massive holiday lights display.