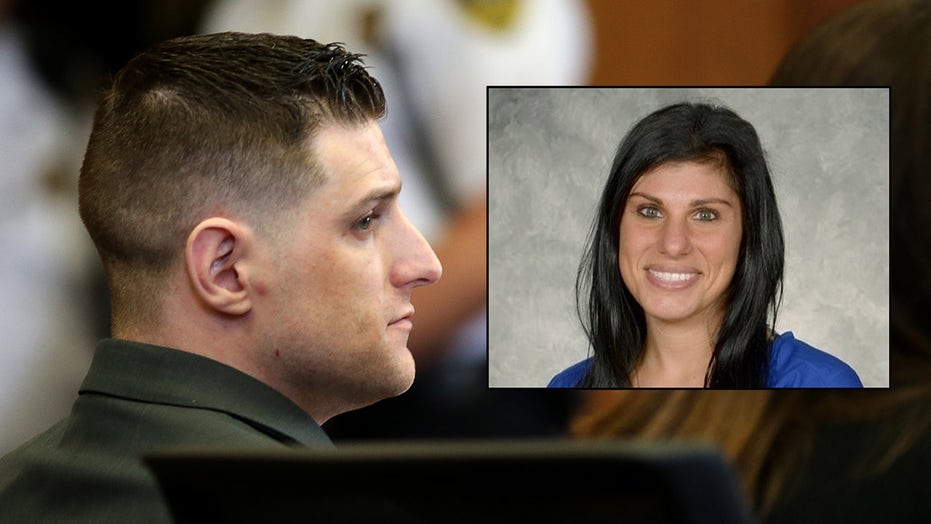 The husband of a Massachusetts teacher who was found strangled and stabbed two years ago was convicted Monday of her murder.

Andrew MacCormack, 31, was found guilty of first-degree murder in the death of his wife, Vanessa, 30.

VANESSA MACCORMACK SLAYING: 'DON'T EVEN LOOK AT US,' RELATIVE SHOUTS TO HUSBAND CHARGED IN MURDER

The two were having financial problems around the time of Vanessa's death, the Suffolk County District Attorney said in a news release. Earlier in 2017, Andrew "forged checks to himself" from his wife's personal bank account and took one of her credit cards, which she reported as stolen. Additionally, her wedding ring – and the ring bought using insurance to replace it – disappeared. Andrew also apparently pawned off his own wedding ring for $120.

Andrew MacCormack, pictured here during his murder trial on Oct. 22, was convicted Monday of murdering his wife, Vanessa MacCormack, who died in September 2017. (The Boston Globe via Getty Images)

This series of events led to Vanessa confronting her husband about his drug use, and told him over text message in August 2017 she planned to sell their house and wanted to contact a divorce attorney. Andrew – who apparently spent $400 to $500 a week on drugs, according to his cocaine dealer – called Vanessa "crazy" and said he was "not signing anything," per The Boston Globe.

On Sept. 23, Vanessa was murdered in their home in Revere, just outside of Boston, while their 1-year-old daughter was in the house. She was strangled with "pretty extreme force," stabbed in the neck, and suffered blunt force trauma to her face and head, authorities said. Her body "sustained chemical burns after her death," which prosecutors said was because of the bleach Andrew used to clean up the mess after he killed her.

Within the next several hours, Andrew "drove seemingly random routes around the Revere area" before bringing his daughter to a home nearby, where he "completed a carpentry job." While he drove to the house, "he texted the victim’s phone to create the appearance that he was unaware of her death."

Andrew then took his daughter to East Boston, where he bought $100 worth of cocaine.

Vanessa's family called Andrew throughout the day, because they were worried when they couldn't reach her. Andrew was apparently on the phone with Vanessa's mom when he got home, and claimed he found Vanessa's body.

“Vanessa Masucci’s future was violently ripped away from her by the person who took an oath, promising to love and care for her. I will not refer to Vanessa by her married name because the man who took her life will not also take her identity,” District Attorney Rachael Rollins said in a statement. “Vanessa’s loved ones – her parents, her siblings, and her daughter – have been left with a void in their hearts and questions that can never be answered."

Her family on Monday praised the verdict, with her mother, Karen Masucci, telling the Globe: “My daughter can rest in peace now. Justice was served.”

“It’s been so tough,” Vanessa's father, Vincent Masucci, said. "I’m so happy that the jury got it together and did the right thing.”