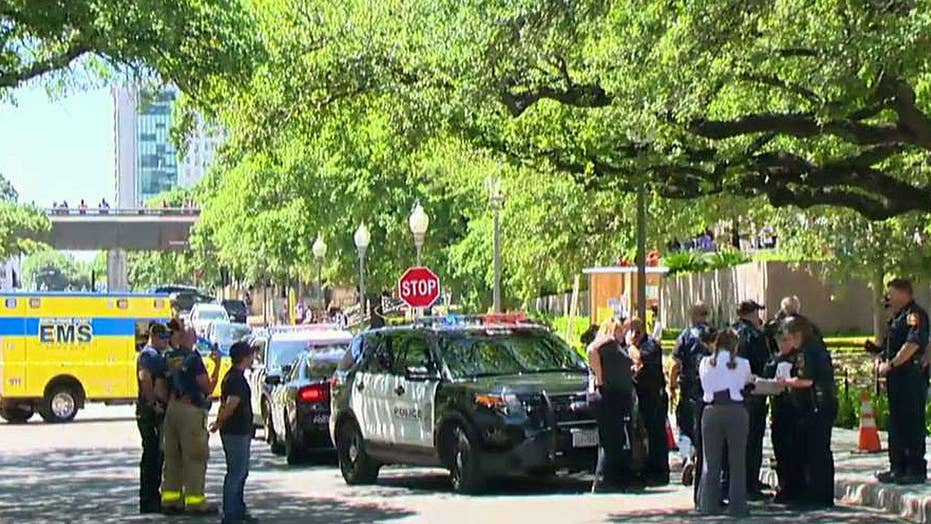 Report: 1 dead in stabbings on University of Texas campus

Austin police say one person is in custody

A student at the University of Texas Austin attacked his fellow undergraduates Monday with what authorities described as a "Bowie-style hunting knife," killing one and injuring three others.

UT Austin Police Chief David Carter identified the suspect as 21-year-old Kendrex J. White, who was taken into custody without incident near a gymnasium.

Picture of the suspect outside Gregory. pic.twitter.com/fEQQxscXhm

Late Monday, the deceased victim was identified as Harrison Brown, a UT freshman from Graham, Texas. There was no immediate word on the conditions of the other victims.

Authorities had no word on a possible motive for the attack. Carter noted that three of the victims were white males and the fourth was an Asian male. The suspect is black.

University President Greg Fenves decried what he called an "unconscionable violent attack" and announced that all classes and activities had been canceled for the day.

"This breaks my heart that any of our students are touched by tragedy," Fenves said. " They come here to learn, to look to the future."

The stabbings began at around 1:45 p.m. Central Time near Gregory Gym, home to the university's women's volleyball team. Carter said an officer responded to an initial report of a stabbing and arrested the suspect at the scene. The chief said that three other victims were found approximately a block away and added that the suspect "calmly walked around the plaza" during the spree.

Student Rachel Prichett told the Associated Press she was standing in line at a food truck outside the gym when she saw a man with a large knife approach the person standing behind her.

"The guy was standing next to me," Prichett said. "He grabbed him by the shoulder and shoved the knife in it. I just started running as fast as I could."

Another student, Ray Arredondo, said he was walking to his car when a mass of students near the gym started running.

"They were just screaming, 'Run! Get out of here!"' Arredondo said.

Lindsey Clark said she saw the suspect get tackled by police as he was running toward the entrance of Jester Hall, a complex of dormitories and classrooms. She described him as wearing a bandanna and gray sweatshirt and said he appeared quiet and subdued as police held him on the ground.

"You could see and hear people running and screaming: 'There he is!"' before he was tackled by officers.

Fox 7 reported that White was a biology major and was expected to graduate in 2018. He was an active member of the Black Health Professionals Organization student group on campus, Melody Adindu, the group's president, told the Associated Press. She said White was passionate about his work and was "very interactive and easygoing."

The Austin American-Statesman reported that White had been arrested on April 4 for DWI after he was involved in a wreck on campus. White allegedly told the officers that he was taking "happy pills" and had his blood drawn as part of the arrest. That case is pending.

Some of White's former classmates at Killeen High School, near the gates of the Fort Hood Army post in Central Texas, had similar recollections of him.

"He was a really smart guy in high school, he was always nice, had plenty of friends, and was in the International Baccalaureate program. I'm definitely surprised he would do this," Kay'Lynn Wilkerson told the Killeen Daily Herald.

Ex-classmate Angela Bonilla called White "the sweetest guy, laughing and having a good time with people".

Adindu and other students complained on social media it took too long for the campus officials to send a text alert of the attack. Texts to students showed a nearly 30-minute lag between the arrest and warning, even though city and county emergency offices were tweeting about the incident when they first responded.

Carter said White was confronted and arrested within two minutes of the first call to police and the situation was immediately under control. The campus siren wasn't used because there was no need for a lockdown to keep people in place, he said.

"There was no ongoing threat. We had him in custody as soon as we arrived," Carter said.

The University of Texas is blocks from downtown Austin and the Texas Capitol and is one of the nation's largest universities.

The attack occurred in the central campus, just a short walk from the administration building and the landmark clock tower that was the scene of a mass shooting in 1966.