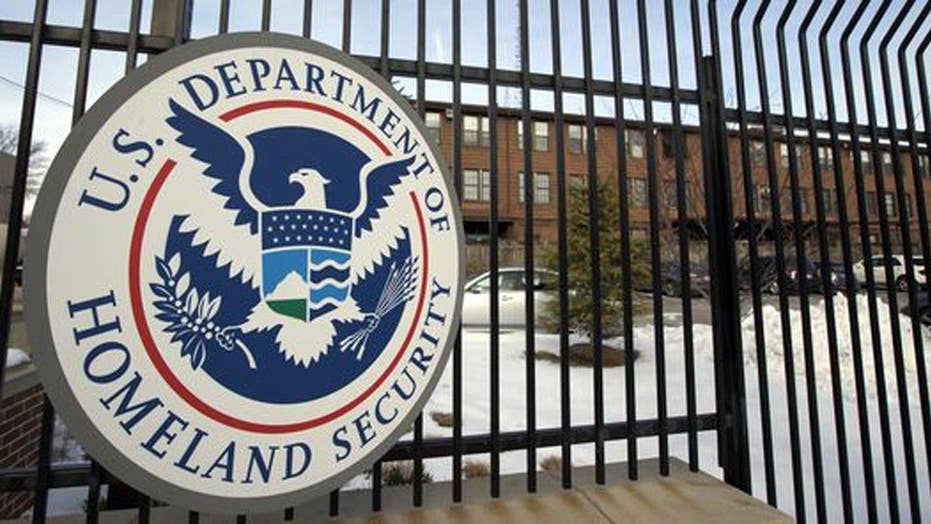 DHS is being accused of an election-year immigration push

GOP senators claim the department is trying to register new voters in an effort to influence the presidential race; Adam Housley reports for 'Special Report'

Critics say a combination of federal and local policies is being blamed for rolling out the red carpet for illegal immigrants, some of whom have committed violent crimes, allowing them to pour into a Long Island, N.Y., neighborhood where four teens have been murdered in recent weeks.

Federal policy that allows Central American children apprehended by Border Patrol to be placed with illegal immigrant sponsors has sent thousands of teens to the region in recent years. While most don't arrive as hardened gang members, many are placed in homes with little supervision, say critics.

“It should not be surprising that when these kids are allowed to enter illegally and then are placed in the custody of someone who is here illegally, they do not have much of an interest in complying with the process,” said Jessica Vaughan, director for policy studies for the Center for Immigration Studies.

Compounding matters for some communities on Long Island, which has been plagued with violent crimes from the notorious El Salvadoran gang MS-13, is Suffolk County's status as a sanctuary county. The Center for Immigration Studies reports that Sheriff Vincent DeMarco, who could not be reached for comment, refuses to honor Immigration and Customs Enforcement detainers without a warrant.

Vaughan noted that illegal immigrants have a big incentive to sign up as sponsors of unaccompanied children, whether they are family or not: Doing so shields them from deportation.

"Sanctuary will have a great impact on safety in Suffolk County as long as gang bangers are allowed to prey on their own people," says Sliwa, referring to the MS-13 primarily targeting Central American migrants for gang membership.

Known for patrolling subway platforms in New York City, Sliwa has now deployed Guardian Angels to bucolic communities on eastern Long Island, where violent crime at the hands of MS-13 is rising.

Vaughan and others claim the situation is a recruiting pipeline for MS-13, and Suffolk County has seen a rise of the notorious and violent gang. Last month, Nisa Mickens and Kayla Cuevas, both 15, were brutally murdered. Days after the teens were found beaten to death, the skeletal remains of 19-year-old Oscar Acosta and 15-year-old Miguel Garcia-Moran were discovered, all allegedly linked, according to the Suffolk County Police Department, to this violent clique -- sparking community outrage.

Vaughan has observed, through close analysis of immigration court records, that about half of the children are not showing up to their hearings.

“When they do, they typically are ordered to be deported, but under current policies, they are not a high priority to be tracked down for enforcement, unless they are convicted of a serious crime,” she says. “The Obama administration’s approach to dealing with the surge in illegal alien minors from Central America has been nothing short of a disaster for many communities.”

She said most of the children are not qualified for any kind of legal status here and are likely to be non-compliant with immigration regulations, especially when housed with an illegal immigrant.

“When that happens, they are usually ordered removed in absentia, but then ICE has to track them down, which isn’t easy and requires a lot of resources,” she says.

Between 2013 and 2015, ICE had deported 5,834 people who entered the country as unaccompanied children, but by the time the feds catch up to them they are well into their adult years and have already committed a violent crime.

Mark Weber, spokesman for the U.S. Department of Health and Human Services, said the goal of the program is to place the children with their parents or family members who are already in the country -- regardless of their immigration status.

Weber says he does not have updated figures on how many children were placed with illegal immigrant sponsors, which includes home visits and follow-up calls once the child has been placed with the sponsor.

However, the statistics posted on the HHS website tell part of the story.

Vaughan expressed little confidence in the follow-up phone call system, saying there is no way to monitor the progress of the child.

Over the past four years alone, 225,725 unaccompanied Central American children have entered the United States -- with nearly 3,500 of them being placed in Suffolk County between October 2013 and July 2016.

"This influx has strained school systems in many places, and even worse, the lax oversight has enabled criminal gangs, especially MS-13, and trafficking organizations to bring in kids to boost their numbers," Vaughan says. "The federal agencies and their contractors have failed in their responsibility to ensure the welfare of these kids; in fact, they admit that they have completely lost track of most of these teenagers."

Sliwa expressed frustration with politicians who are obsessed with preventing ISIS attacks while gangs such as MS-13 wreak havoc around the nation and HHS continues the flood of Central American children in communities that are not prepared for the fallout.

"All you hear is crickets from both sides of the aisle," says Sliwa. "Politicians don't get gangs."