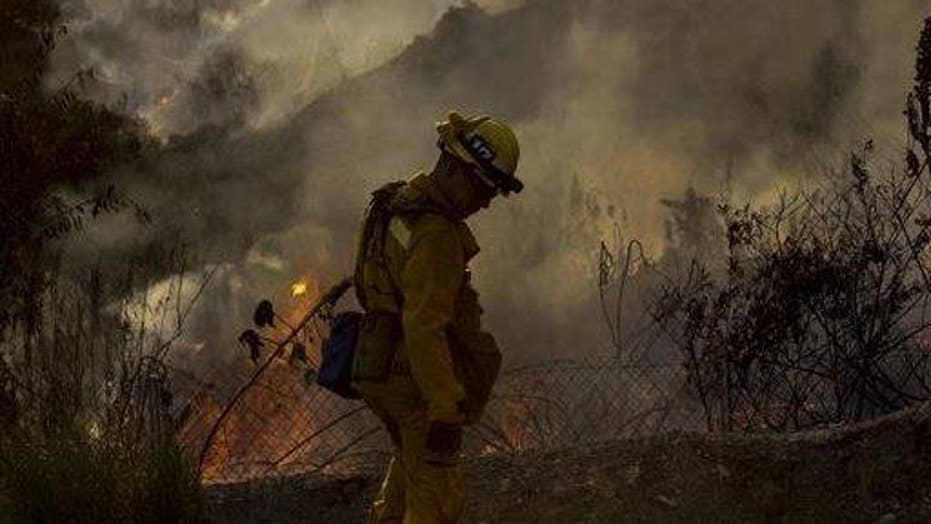 Two wildfires that together burned 7 square miles and drove several hundred people from their homes in foothill suburbs of Los Angeles were growing fast and surging closer to each other.

Aggravated by triple-digit heat that hastened similar fires from the Pacific Coast to New Mexico, the two blazes erupted Monday near Azusa and Duarte and gave a big scare to homeowners before burning mostly away from the cities and toward the Angeles National Forest.

Charlie Downing, out of breath and with his shirt off because of the heat, said when he first smelled fire and felt heat that he ran outside of his house in Duarte and was astonished by size and nearness of the flames.

"I came running over just to look and it was 15 to 20 feet in the air," Downing told reporters. "By the time I came back and told my grandma and my kids to get in the car, it was right by the car."

He and two neighbors sprayed the flames with their yard hoses until firefighters arrived minutes later.

It was "very fortunate" that the fire then shifted toward the mountains, though it could easily move back during the night, Los Angeles County Fire Department Deputy Chief John B. Tripp said.

"If we get down-canyon winds, it could shift and homes could be in danger again," Tripp said.

The fires were less than 2 miles apart, burning out of control, and could soon merge into one, authorities said.

Most mandatory evacuations will be lifted Wednesday morning and nearly all by Saturday, authorities said Monday night.

About 270 homes and other buildings were threatened by the blaze, which has charred more than 12 square miles since Wednesday.

Another wildfire was growing near Potrero, a small desert town close to the Mexico border. It surged to nearly 12 square miles and forced the evacuation of about 75 people from the ranching community about 40 miles southeast of San Diego.

In central New Mexico, a 28-square-mile fire that erupted last week and destroyed 24 homes in the Manzano Mountains south of Albuquerque showed signs of slowing down. Higher humidity has allowed crews to strengthen lines around the fire, and some evacuees would be allowed to return home on Tuesday.

In eastern Arizona, a fire doubled to nearly 42 square miles and led officials to warn a community of 300 residents to prepare to evacuate. The blaze on the Fort Apache Indian Reservation southwest of Show Low was not moving quickly toward the community of Cedar Creek because of sparse vegetation and shifting winds.