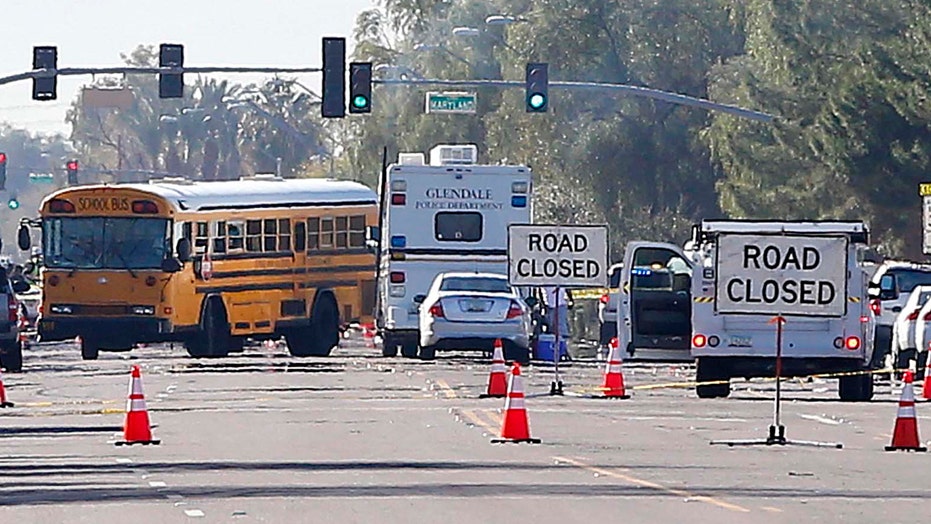 Two 15-year-old girls died Friday in a shooting at a suburban Phoenix high school that initially caused panic among parents who could not reach their children but later emerged as a murder-suicide.

Police announced that a suicide note was found at the shooting scene near the cafeteria area of Independence High School in Glendale.

They said the girls each were shot once, were declared dead at the scene and a weapon was found near the bodies.

"Information gathered by detectives reveal the two girls were very close friends, appeared to also be in a relationship," Glendale police spokeswoman Tracey Breeden said in a statement Friday afternoon.

Breeden said it is believed nobody witnessed the shooting.

Both teens have been identified, but Breeden said "their names will not be confirmed or released at this time by the police department due to their juvenile status."

Our prayers are with the students, educators & families at Independence High School & all the first responders on the scene. #PatriotPride

The students were declared dead at the scene, each from a single gunshot wound. Investigators said they found one gun next to the girls.

It is not an active shooter investigation and no other students are in danger, police officer Tracey Breeden said. "Your children are safe," she told parents who had reached out to police. She added that there were no credible threats to the school made on social media before, during or after the shooting.

Students typically are not allowed to use their cellphones during lockdowns, but as calls from parents flooded the district, officials asked teachers to have students call family, Superintendent Brian Capistran said. Social workers and counselors will be available to students and staff when school resumes Tuesday, the he added.

Dozens of worried parents waited at a convenience store for word about their kids. Cheryl Rice said she was frightened for her 15-year-old daughter but was relieved when the girl called to say she was OK.

The shooting unfolded shortly before 8 a.m. in a covered patio area near the cafeteria. "This occurred in an isolated area," Glendale Police Sgt. David Vidaure added.

Emergency vehicles including an ambulance were seen outside the building, Fox 10 reports. School officials told parents to gather at a nearby Wal-Mart at W. Glendale Ave. & N. 75th Ave. where buses would take them to meet students.

Streets were closed to traffic in the residential area around the school after the shooting.

The Glendale Union School District website says the school has about 2,000 students and was founded in 1977. Glendale is 10 miles northwest of Phoenix.