In a tweet Thursday, Rand, a Kentucky Republican, said he planned to introduce his proposal soon.

"My bill will take the money that would have gone to Pakistan and put it in an infrastructure fund to build roads and bridges here at home," the senator tweeted.

On Thursday, the U.S. announced plans to end up to $2 billion in security assistance to Pakistan. The reasoning: The U.S. State Department contended that Pakistan had failed to take "decisive action" against Taliban militants targeting U.S. personnel in neighboring Afghanistan.

The figure represents about $1 billion in planned military assistance, including $255 million that was placed on hold in August, and about $900 million in Coalition Support Funds intended to reimburse Pakistan for counterterrorism operations.

Earlier in the week, President Trump contended that the U.S. had “foolishly” given Pakistan more than $33 billion in aid over the last 15 years and had gotten nothing in return but “lies & deceit.”

Nikki Haley, U.S. ambassador to the United Nations, accused Pakistan of playing a double game for years, at times working with the U.S. while harboring terrorists who attack American troops in Afghanistan.

“That game is not acceptable in this administration. We expect far more cooperation from Pakistan in the fight against terrorism,” she said. 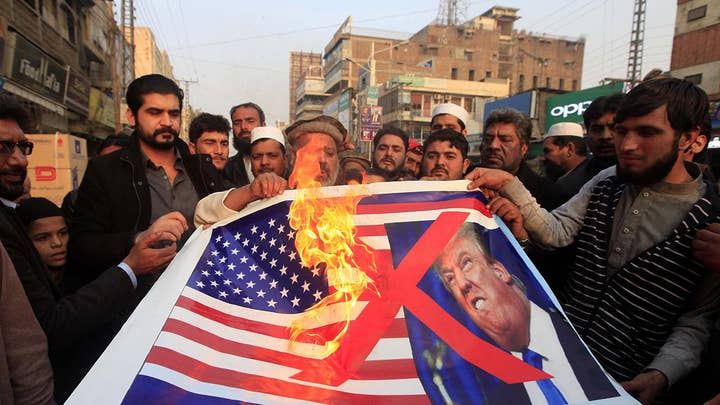 But officials in Pakistan expressed disappointment with the U.S. plans, saying the suspension of aid would be detrimental to bilateral relations. Pakistan's Foreign Ministry asserted that the country had spent more than $120 billion of its own funds on the war on terror in recent years.

It contended that Pakistan's cooperation with the U.S. had helped "decimate" Al Qaeda and drive other militant groups away from the Pakistan-Afghanistan border region.

The United States is currently holding up more than $200 million in foreign aid to Pakistan. A senior U.S. administration official emphasized the money could potentially still be available if Pakistan were to change course.

But Paul went a step further Thursday, arguing that Pakistan has been of little use in the war on terrorism, and proposed cutting off aid to Pakistan altogether.

“We’ve sent Pakistan $33 billion since 2002. What did we get for it? Well Pakistan didn’t even help us find Bin Laden, even though he was living in one of their cities for years. Then they jailed the informant who helped us to get Bin Laden. They’ve allowed suspected terrorists to operate in their country. Some say Pakistani intelligence agents actually aid and abet the terrorists. It’s wrong.”

Paul, who said he has been fighting to end aid to Pakistan for years, called Trump’s recent proposal to suspend aid “a breakthrough.”