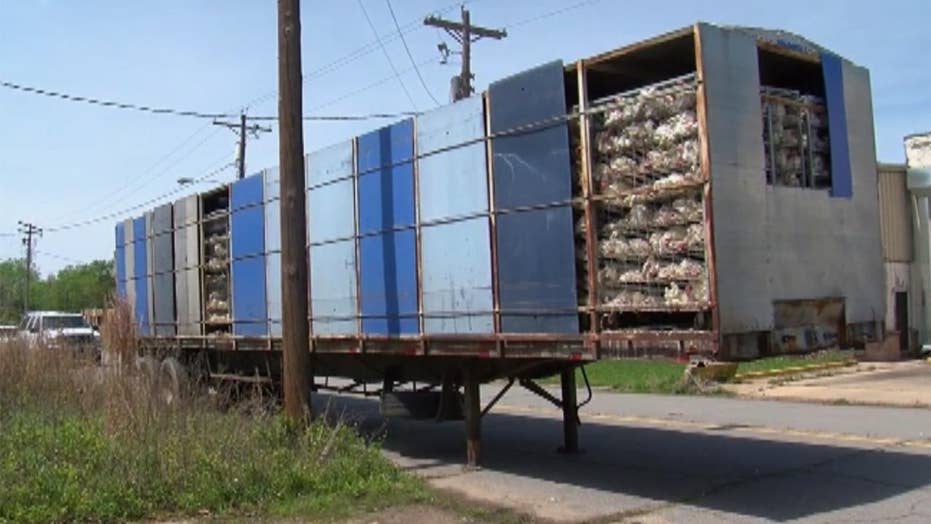 Disturbing case of animal cruelty investigated by authorities in Pine Bluff who say someone ditched a trailer with load of roughly 3,000 chickens.

A trailer full of thousands of dead or nearly dead chickens was found abandoned in an Arkansas neighborhood, local authorities said Wednesday.

Roughly 3,000 chickens were left to die inside the trailer, which was located in a secluded part of a Pine Bluff neighborhood, Jefferson County Sheriff’s Major Lafayette Woods told Fox News on Thursday.

Woods said this is one of the worst cases of animal cruelty he’s ever seen. “It’s inhumane,” he added.

Authorities have identified the driver of the trailer and said the birds came from Summit Poultry Inc., located in Pine Bluff. Officials believe the chickens were sent to Oklahoma to be euthanized before they were brought back to Pine Bluff and found in the neighborhood. It's not currently clear why the birds were euthanized out-of-state.

“We’re still trying to find out why the chickens were left in the neighborhood,” Woods said, adding that whoever left the trailer "chose the location for coverage and concealment."

Since some of the chickens were still alive when the trailer was found -- those responsible could face animal cruelty charges.

More specifically, they could face a misdemeanor charge that could result in jail time and a $1,000 fine, Woods told Fox 16. He’s also researching potential federal charges that could be brought against the culprit.

Local investigators are working with the United States Department of Agriculture (USDA) to prosecute anyone responsible. According to Woods, the USDA was made aware of the trailer before Jefferson County Sheriff’s Office contacted the organization about the chickens. A representative with USDA was not available for comment when contacted by Fox News on Thursday.

"This is probably the most inhumane way I’ve seen poultry or chicken processed,” Woods told Fox16.

Summit Poultry Inc. could not be reached for comment when contacted by Fox News.