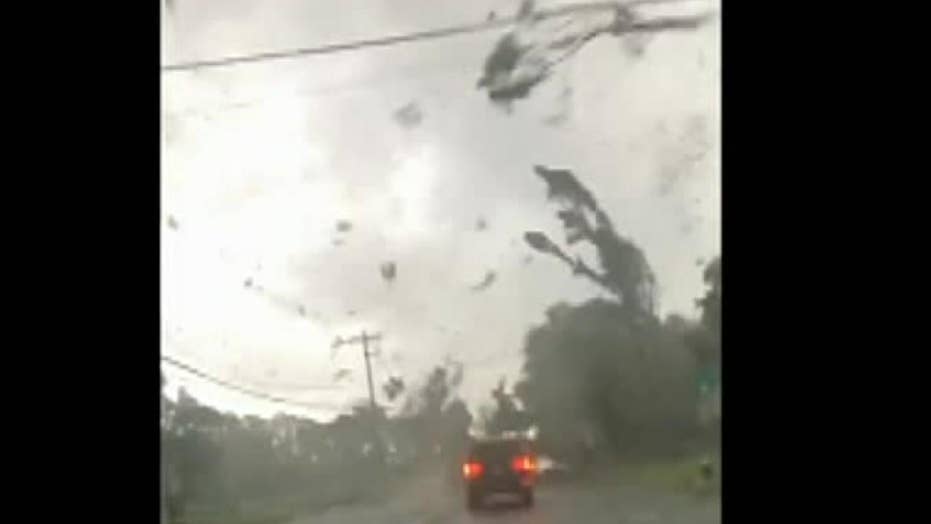 A driver in New Jersey came face-to-face with a column of swirling debris on Wednesday after a small tornado touched down just outside of New York City.

The National Weather Service's New York Office said on Twitter that a brief tornado touched down around 2:47 p.m. near Springfield Avenue and Route 22 in Springfield Township, located about 20 miles outside of New York City.

The tornado, rated EF-0, was on the ground for about four minutes with radar-estimated winds of 70 mph but did not cause any serious damage or injuries.

Video shared to Twitter showed the moment motorist drove towards the tornado as it snapped trees and sent debris flying. Other video showed the rope-like tornado with rotation over the area.

The tornado was spawned by powerful storms that swept through the Northeast on Wednesday night, bringing lightning, hail, and strong winds. Thousands of people across the region lost power due to the storm, FOX5 reported.

“Lot of wind, lot of thunder. I heard the wind. It was really bad,” Springfield resident Melissa Scala told CBS News York. “I was crying. The police came, the fire department came. My daughter was OK, thank God. So it was a really scary incident, and this is the first time anything ever big happened.”

Powerful winds nearly launched the car into a business.

Last month a tornado touched down in Mount Laurel, located about 20 miles east of Philadelphia in Burlington County in the southern part of the state. The brief "landspout tornado" touched down in a commercial warehouse parking lot and then moved across the lot, overturning one car that was seen on surveillance video.

The tornado on Wednesday was the sixth confirmed tornado in New Jersey this year, according to NJ.com. The Garden State typically averages about two twisters per year.