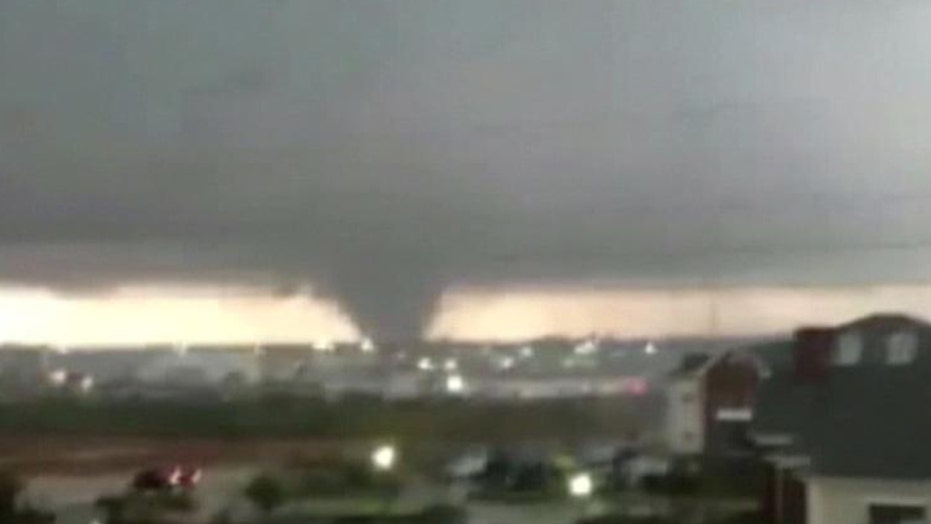 HATTIESBURG, Miss. – A tornado tore through a Mississippi town on Sunday as part of a severe storm that caused significant damage to buildings, downed trees and left dozens injured.

On Monday, residents shaken by the tornado were waking up to a day of removing trees, patching roofs and giving thanks for their survival.  Daylight also offered emergency management officials the chance to get a better handle on the damage that stretched across several counties.

It was raining at first light Monday and people began trying to salvage what they could in one damaged neighborhood. Some people walked around fallen trees, power lines, smashed cars and other debris to carry belongings away.

The twister traveled down one of Hattiesburg's main streets and mangled homes, commercial buildings and structures on the campus of the University of Southern Mississippi. Mississippi Gov. Phil Bryant says more than 60 people were injured in the storms.

A Mississippi Emergency Management Agency spokesman says it appears that a single tornado caused the damage in those two counties and Lamar County. Hundreds of homes are damaged in Forrest County, along with a couple dozen in the other two.

On the campus of the university, trees were snapped in half around the heavily damaged Alumni House where part of the roof was ripped away. Windows in a nearby building were blown out, and heavy equipment worked to clear streets nearby in a heavy rain after the worst of the weather had passed.

East of campus, 47-year-old Cindy Bullock was at home with her husband and dog, a terrier mix named Vinnie, when she heard the tornado coming. They ran to a hallway and covered their heads. It wasn't long before the windows in the kitchen and bedroom exploded. The storm stripped all the shingles off the roof and left holes in it, while knocking over a large pine tree in the yard.

After dark, the Bullocks were trying to arrange their stuff inside so it wouldn't get wet from the dripping water.

"I just looked out the window and I heard the rumbling. It sounded like a train. We ran to the hall, and the kitchen windows and the windows in the bedroom exploded. It happened pretty fast," she said.

There were large trees blocking the road all through her neighborhood, and several of the houses were hit by falling trees. Her friend was staying with them after the friend's apartment took a direct hit from a falling tree.

To the west, Marion County emergency director Aaron Greer says three injuries have been reported in the community of Pickwick, about seven miles south of Columbia. He says two people were taken to hospitals, but the third didn't have the injury examined.

Greer says one mobile home was destroyed, three other structures have major damage and several have minor damage.

In the city of Petal, just northeast of Hattiesburg, a brick-walled Ace Hardware store was completely blown away, leaving nothing but the buildings foundation.

Meanwhile, the McComb Fire Department sent six firefighters to help with search and rescue efforts at the request of the Hattiesburg Fire Department.

Charlotte Walters, 61, and her daughter were moving buckets and bowls around inside their house on Monday trying to catch water pouring through holes in the roof. The women were at home when a relative called and said a tornado was headed their way.

"It came through like a freight train. I always heard it sounded like a train. It sounded like Katrina," said Walters, who lives in a neighborhood also hit by the 2005 hurricane that devastated the Gulf Coast

Besides holes in the roof of her one-story wood frame house, a falling tree had damaged the side and another one collapsed on her carport, denting and breaking windows in three cars there

"I'm blessed. At least I don't have one of those in my house," Walters said, pointing to a tree that had fallen onto a neighbor's house next door.

Mississippi Gov. Phil Bryant plans to go to Hattiesburg on Monday to check out damage in the city and at USM, his alma mater, spokesman Mick Bullock said.

Fox News' Garrett Tenney and the Associated Press contributed to this report.