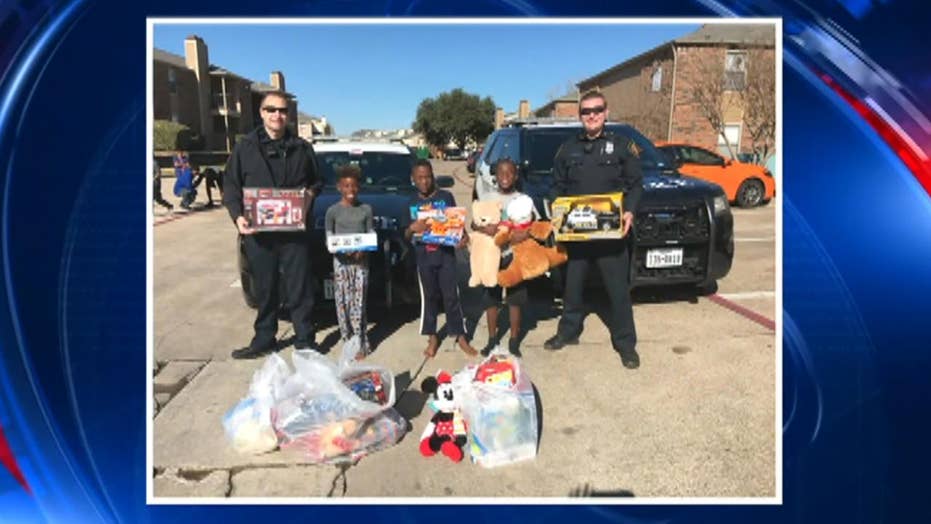 Fort Worth police save Christmas for family after gifts were stolen

A mother in North Texas is feeling extra grateful this Christmas after police in Fort Worth replaced gifts for her three sons that were stolen out of her truck Friday.

Brittney Curry told Fox 4 News she thought the holiday was going to be ruined after a Grinch stole bikes, games, shoes and clothes out of the truck after it was left in a parking lot for several hours.

"There was no way we were going to be able to rebuy any of those gifts," she told Fox 4. "I was devastated."

Curry said she bought the gifts on Friday with a Christmas bonus check.

Brittney Curry's three sons were given new Christmas gifts from Fort Worth Police Officers after theirs were stolen from her truck. (Fox 4)

"Who steals that kind of stuff? What kind of heart do you have?" she said.

After she broke the news to her sons, Curry then contacted Forth Worth Police who told her a group of teens was seen near the vehicle that afternoon.

When Curry called again to follow up on Saturday, police surprised her and said they had three bags of gifts they wanted to bring over.

Officers later stopped by and let the boys pick their own gifts from toys donated to the department for young crime victims.

"It's nice to be able to have something just good happen,” Officer Bradley Klingberg told Fox 4 News. "Any time you can go and make a real difference in someone's life, it feels really good."

Forth Worth Police Officer Bradley Klingberg said it was nice to be able to "have something just good happen." (Fox 4)

Curry said the officers were "talkative and amazing" with her sons, and that they turned a "horrific Christmas" into something else.