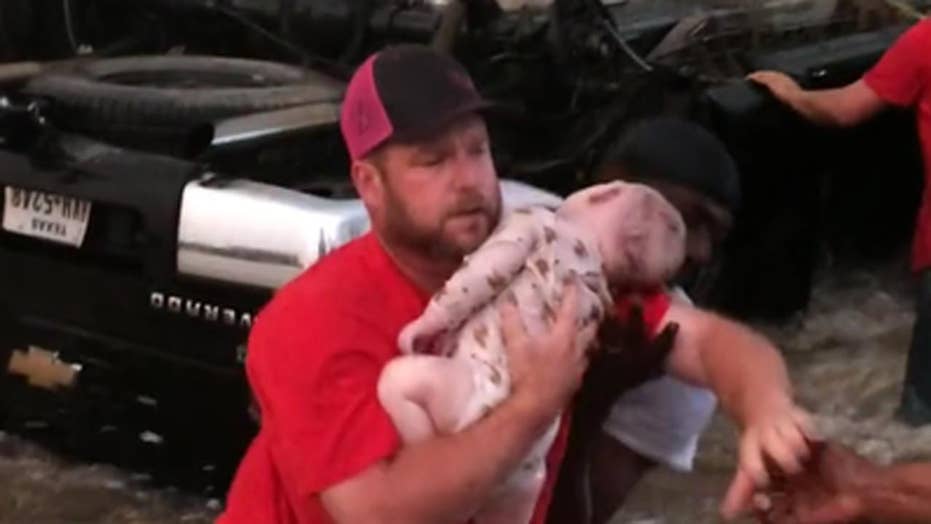 Raw video: Rescuers frantically rush to save children trapped in vehicle in Texas

The path of destruction that tornadoes left Saturday afternoon can still be seen across the Canton area. The storms killed four people and injured 49 others.

But as we learn of more destruction, we also meet people who helped save lives.

One family who was trying to get out of harm’s way ended up finding themselves in need of rescuing.

Korry Prox was driving along Highway 64, just north of Interstate 20 near Canton, when he found himself in the middle of a life-and-death water rescue.

“I didn't know who was on the other side,” the Good Samaritan said. “I just knew I had to help.”

A black SUV had hydroplaned off the roadway and landed on its roof in a drainage ditch. Two people were stuck in the front seat but able to breathe. Their two small children were trapped in the backseat underwater.

SCOTTISH SURFER FOUND CLINGING TO BOARD AFTER 32 HOURS AT SEA

The release of pressure allowed the other men to open the rear passenger side door and found an infant boy, limp. Tom Mitchell, the guy taking the cell phone video, went from bystander to lifesaver.

“I just jumped in and started doing CPR on the baby,” Mitchell said. “My phone went black when I was holding the baby, doing compressions and breathing.”

A woman can be heard in the background praying over Mitchell's shoulder.

“I started feeling better, and I felt the baby react,” Mitchell said. “And she continued praying, and that baby started coming back.”

Just then, the Good Samaritans found another child in the backseat: a 2-year-old girl who was still strapped in her car seat. By then, volunteers with the Terrell Fire Department showed up, took over CPR and gave the little girl CPR and oxygen.