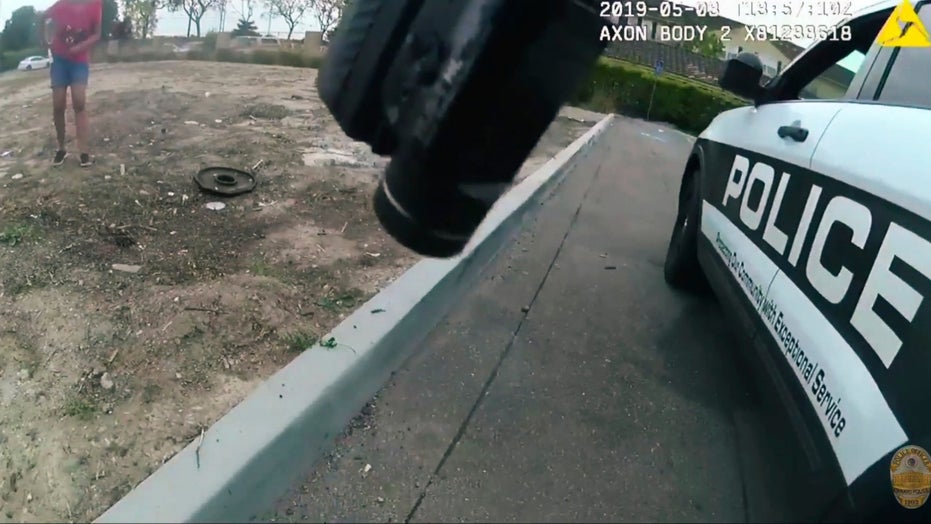 Body camera footage that was released Thursday by California’s Oxnard Police Department showed a 17-year-old girl apologizing to an officer after she ran at him with a large knife.

Chief Scott Whitney described the confrontation on Friday, May 3, in an edited video package that was posted online by the department. The teenager’s face was blurred in the video due to her age.

Officers had received multiple calls regarding a woman with a 12-inch knife who “seemed disturbed,” Whitney said.

"Then something bad is going to happen," Roberts said.

The camera showed the officer backing away from the girl, who was wearing a red shirt, blue shorts and sneakers.

Body camera footage showed a 17-year-old girl apologizing to an officer who shot her after she ran at him with a large knife on Friday, May 3. (Oxnard Police Department via AP)

“Drop it,” the officer could be heard saying.

“Come on shoot me,” she continued. “I’ve been waiting all day.”

When she suddenly began running at Roberts with the knife in her right hand, he shot her multiple times and she collapsed.

Following the shooting, the officer was able to get the knife away.

"I'm so sorry," the teenager said while writhing on the pavement.

"It's OK," an officer is heard saying.

The officer was seen giving her medical aid as they waited for an ambulance.

The girl remained hospitalized Thursday in critical but stable condition, officials said. The investigation was ongoing and Roberts was placed on administrative leave, in accordance with police policy. The second officer arrived moments before the shooting and was preparing to use a beanbag weapon to try to subdue the girl, according to a police statement.