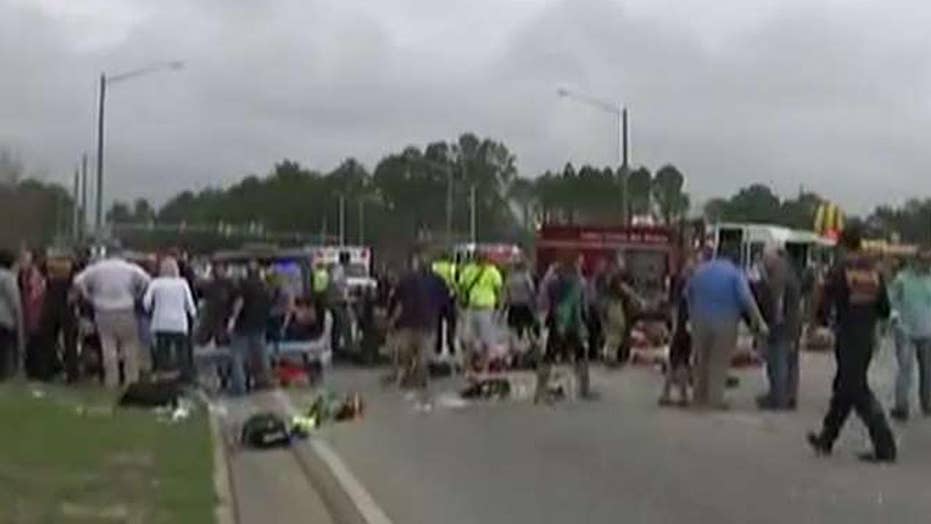 Vehicle plows into crowd at Mardi Gras parade in Alabama

A group of revelers were mowed down by an out-of-control vehicle at a Mardi Gras parade for the second time in a week, with Tuesday's incident involving a dozen injured high school band members at an Alabama event.

A total of 12 Gulf Shores High School band members -- aged 12 to 17 -- were injured, including three people who were in critical condition, when an SUV hit them on Tuesday afternoon, officials said.

The driver, who has not been named, is a 73-year-old man who did not appear to be under the influence of alcohol or drugs, officials said.

"We are certain at this point that it wasn't an intentional act, that it was an accident," said Gulf Shores Police Chief Edward Delmore.

Delmore said he didn't want to "speculate on dynamics," and wanted investigators to have time piece together the crash. The driver has already given blood samples and statements voluntary, he added.

The vehicle may have been "a part of the parade," according to an official who spoke earlier Tuesday, though police said they were still looking into the man's potential role. Witnesses told FOX10 it was a white late-model SUV with the letters MOAA on its side. MOAA are the initials of the Military Officers Association of America.

The Department of Homeland Security was monitoring the situation.

A police spokesperson, who termed the crash "a tragic accident," said the SUV's driver was "aware there's been an incident."

A witness told FOX 10 the SUV struck the students and "mowed them over."

Gulf Shores canceled the parade after the incident and closed U.S. Highway 59 in the immediate area.

"Right now our thoughts and prayers are with the Gulf Shores High School Family," said Eddie Tyler, the superintendent for Baldwin County Alabama Public Schools. "I want to thank all the EMS and law enforcement professionals who responded and are still assisting families."

The crash unfolded just days after 28 people were injured when a truck plowed into the crowd at a New Orleans Mardi Gras parade on Saturday. The driver in that incident allegedly was highly intoxicated.