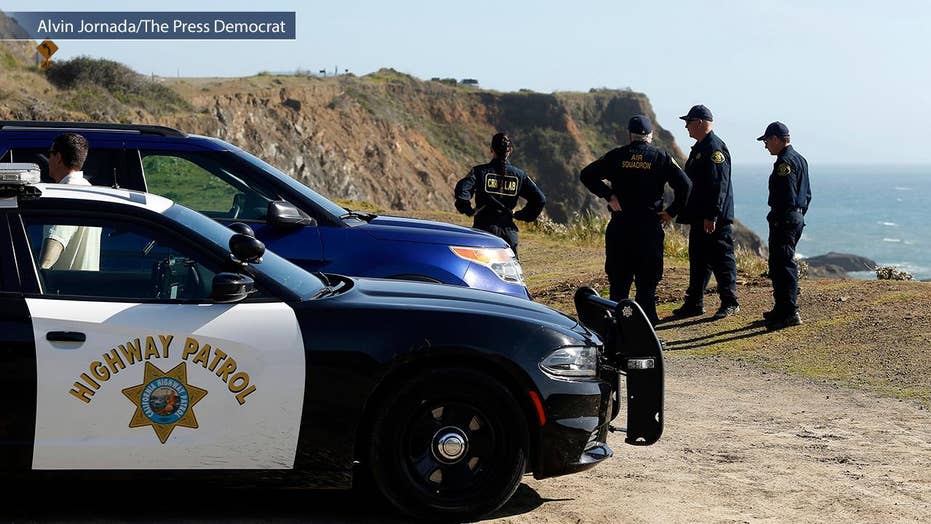 Family of 8 likely dead after SUV plunges off cliff

California police: Three of the six children are still missing following the deadly cliff crash. Jonathan Hunt has the story.

A surveillance video that appears to show one of the Hart mothers is being reviewed as a possible clue in deciphering the route the eight family members took — and in the search of the three children who were reported missing but presumed dead — after their SUV plunged off a California cliff last week.

Authorities have spent days retracing the "Hart Tribe’s" steps since the family’s battered SUV was found overturned at the bottom of a cliff just off the Pacific Coast Highway, about 150 miles north of San Francisco. The investigation found the family of eight was believed to be in the Newport, Ore. area around 8:15 a.m. on March 24, two days before their vehicle was found, California Highway Patrol said in a Wednesday news release.

Police said the route goes cold, however, by Sunday night. A surveillance video taken just after 8 a.m. at a Safeway in Fort Bragg appeared to show Jennifer Hart at the register buying bananas and several other items. It’s unclear where the Harts went after the incident.

Surveillance video believed to be showing Jennifer Hart at a Safeway a day before she was found dead with five other family members. (CHP)

Initial reports said there were signs that suggested the family planned for a short trip.

Their SUV, a 2003 GMC Yukon LX with black rims, was found on March 26 with Jennifer and Sarah Hart, both 38, inside the vehicle. Authorities found the bodies of three children — Markis Hart, 19; Jeremiah Hart, 14; Abigail Hart, 14 — at the scene.

Authorities mapped out the route they believe the Harts traveled along before they were found dead. (CHP)

Devonte Hart, 15, Hannah Hart, 16, and Sierra Hart, 12, are still missing. Mendocino County Sheriff Lt. Shannon Barney said rescuers will be searching the water near the crash site Wednesday morning for the three children, who were presumed to be in the vehicle at the time of the crash, Oregon Live reported.

On Tuesday, Alexandra Argyropoulos, a former friend of the family, told The Associated Press she alerted Oregon welfare officials about Jennifer and Sarah Hart because she felt they were withholding meals from their six adopted children. Argyropoulos said she "witnessed [in 2013] what I felt to be controlling emotional abuse and cruel punishment" toward the children by the couple, who were living in West Linn at the time.

"My heart is completely broken. The current system failed to protect these children from their abusers," Argyropoulos said.

A photo of a similar vehicle, 2003 GMC Yukon LX with black rims, (not the same one) that the Hart family was in before the deadly crash. (CHP)

Argyropoulos said she was told the children had been interviewed but there was nothing more the Oregon Department of Human Services could do because there was not enough evidence to make a case.

A similar instance also prompted neighbors Bruce and Dana DeKalb to alert Child Protective Services three days before the family was found dead. They feared Devonte — who gained nationwide fame after a photo of him at a 2014 Portland, Ore., rally holding a “Free Hugs” sign went viral — was going hungry because he'd been coming over to their house too often in the past week asking for food.

Authorities attempted to reach the family three times and made their third attempt the day after their SUV was found.

Investigators believe the deadly crash may have not been an accident — as originally thought — after evidence suggested the driver, Jennifer Hart, accelerated off the side of the road. Court documents stated the speedometer of the SUV was pinned at 90 mph, though authorities warned the device could have been altered at impact.